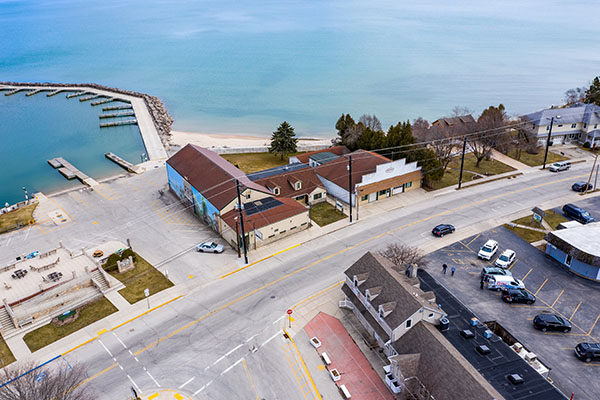 Business owner Gary Nelson and the Baileys Harbor Town Board of Supervisors have already agreed to a deal for the town to buy Nelson’s property adjacent to the marina.

Now residents will make the final decision with their votes during the April 20 annual town meeting. They’ll be asked whether the town should purchase the lakefront land and Nelson’s hardware, motel and garage buildings for $1.95 million.

Nelson has agreed to give Baileys Harbor a six-year loan. The town would make a down payment this year and loan payments for the next five years, with the balance due in 2027. During that time, the town would seek public grant money, private funding sources and other new funding streams to reduce the tax impact of the loan needed to finish paying Nelson.

Baileys Harbor Treasurer Lois Pluff said the town’s portion of a property owner’s tax bill, at least initially, would increase $43.12 on a $200,000 property if voters agree to the purchase. An owner of a $150,000 house would initially see the town portion of her or his tax bill go up by $32.34.

Property owners can calculate their own cost with the increase in the mill rate of $0.2156 per $1,000 of taxable value. The new mill rate was based on the town’s most recent assessed value of just under $511.2 million.

Residents who have been living in Baileys Harbor for the past 28 days can prove that residency and vote during the April 20 annual town meeting. Nonresidents may speak but not vote during the meeting.

Those attending are asked to wear masks and practice social distancing.

Town board members have said they believe the purchase would achieve the goals of maintaining the town’s character.

“It’s an opportunity for people of the town to determine the future of that property rather than having a buyer come in and just do what they want,” said Town Board Chair David Eliot.

The town can decide whether to preserve any of the buildings or open up green space “with views of the water that we don’t have throughout the rest of the town,” Eliot said.

Late last week, Nelson said he thought he and town officials had worked out a good deal for the town and the people.

Nelson said he would prefer for his longtime Baileys Harbor neighbors to decide the future of the property where he grew up and worked for most of his life, but he’s still not 100% opposed to selling or developing the property for housing or lodging if this transaction doesn’t work out.

“If we can get this done without having to go down that road, that would probably be a good thing,” said Nelson, who grew up in the house attached to the store. “I’ve lived in Baileys Harbor all my life. My father started there in 1945, and we have always gotten along great with the town. He was fire chief for many years, and I was, too. Our property [has] adjoined with the town property since the marina was built.”

Nelson closed the Baileys Harbor store in 2016. Now he and his family are focusing on operating and expanding Nelson’s True Value north of Fish Creek.

Nelson said it would be complicated to develop the Baileys Harbor property privately as it exists now. For instance, the well water passes annual testing, but the well is nonconforming for new businesses, according to the state, with four-inch casing instead of six-inch. There’s no suitable spot in front of or behind the buildings to dig a new, deeper well without demolishing buildings.

There are also some complicated existing agreements between the town and the Nelsons for use of parking spaces, the lakefront and marina. If the town purchases the property, it would regain the marina slips and the parking spots for the former store’s shoppers and the tenants of the apartment units. And the easements would not matter anymore.

“It’s a natural fit for the town to want [property] there,” Nelson said. He said he had informed the renters of the apartments that he has received an offer, and they may need to relocate by late summer or early fall.

Eliot said interest-rate increases could raise the annual payment slightly when the town needs to make a final payment in 2027, but several other factors could lessen or cover the annual cost of the loan payments. Eliot noted that local governments can continue to seek grants to pay for land purchases for years after the purchase. Sister Bay is seeking grants to cover some of the costs of purchasing Pebble Beach, for example.