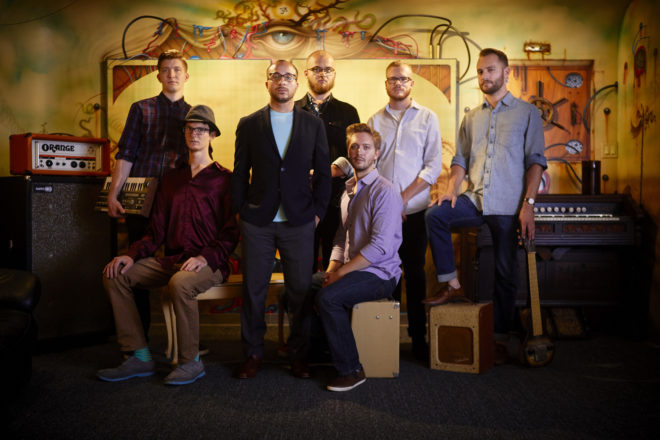 Activism within an artist doesn’t end at the lyrics for frontman Bassel Almadani of Bassel & The Supernaturals. As a band that has raised thousands of dollars for humanitarian aid in Syria, their activism goes much further, and much deeper. Before their visit to Door County June 1, the Pulse talked with Almadani about the band’s history.

This multi-membered band was established by Almadani after moving from Ohio to Chicago. Entering the scene with gigs as a songwriter, he found himself immersed amongst a number of talented musicians, he said, though a lot of those relationships were transient at first. Once things settled down, he was able to build deeper creative connections with people he wanted to write with, he said.

After experimenting with genres like indie and folk while making that transition, he found himself entranced by neo soul and funk. Finding that it allowed for a more emotional connection personally and with an audience, he stuck with it. Yet, their music is a hybrid of sounds, he said. Lots of what’s on their latest album, Elements, came from himself and an acoustic guitar.

“I’m never intentionally writing soul music more than I am writing music that comes from the soul; pouring my soul into whatever I write,” Almadani said.

The band’s approach to songwriting comes from more than other genres or artists. It comes from within Almadani’s own family. As a first-generation Syrian-American, his family has been directly affected by the war in Syria, and he’s made an effort to use his music as a way to start conversation.

Though Almadani was born and raised in Ohio, he spent summers as a young boy visiting the country and his extended family, he said. Experiencing beauties and colors of a new caliber helped form ideas for his music. That, and attempting to create a bridge between himself and a place where he’s physically not. For example, he wrote a song called “Aleppo,” about the city where his parents were born and raised. He wrote, “Have no fear, time goes slow. These summer nights and the smell of rose create a new beginning, when the world it keeps on spinning.”

Not all of his music is about the Syrian conflict, though. They have a robust set, he said, and ideas come from all over the place. He shared an anecdote about how driving through the Appalachians and stopping for a hike in recently fire-covered mountains inspired a new song.

Yet, having a platform where he can share his connection to Syria is something he’s grateful for, he said. The band fosters knowledge within others that might never have encountered it otherwise.

“We can create these positive spaces through art to talk about what’s happening,” Almadani said.

Their music fosters connections, too. Many shows have been benefit concerts to raise money and awareness. A favorite of Almadani’s was when they played a show in Kansas City where refugees from KC for Refugees prepared Syrian food, so people got a free show and food. It brought people together of all shapes and colors, he said.

Experiences like that are incredibly powerful, he said, and though he wishes it wasn’t necessary to have to raise awareness about an issue that’s been going on for so long, it’s a reminder of why they do this in the first place.

This is how Almadani’s activism lies deeper. He believes that if you are able to have a voice that can be used for change, use it. It’s about being able to embrace that reality, he said. Though they’re not a “Save Syria band,” having the identity he has makes him feel accountable to create these spaces.

“Activism, more than anything, is not having the fear to talk about something,” Almadani said. “It almost seemed selfish to not use my voice to enforce some level of positive change.”

The band hopes that by the end of their live shows people will leave tired from dancing. After all, it’s about the music, and being able to make others feel inspired and positive is where the true reward lies.