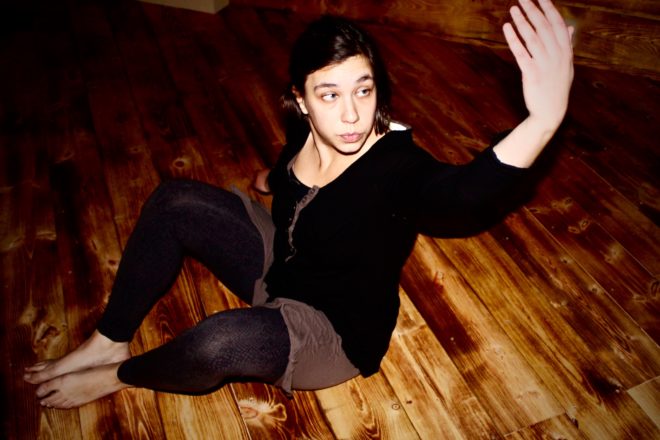 Jackie Thelen had managed to find a rare moment of summer solitude at Toft Point when she drew out the first physical movement that reflected her recent stream of thought on finding a sense of place. Three months later, that little bit of dance has evolved through self reflection, writing and research to form the basis of Thelen’s newest work, Nest, which will be performed at a special art and community event Dec. 7.

Thelen is a Baileys Harbor resident who, through childhood and college, has explored personal expression through dance. She began her studies at Lane Community College in Oregon, where she choreographed and presented numerous dances before transferring to, and graduating from, the University of Wisconsin’s dance program in 2013. Though Thelen has presented works at the collegiate level and after, Nest is the first piece she will present in Door County.

The piece explores the concept of nests as a reflection of place and community. Thelen considers herself a “migratory person,” having spent years traveling from one place to another with no permanent sense of home. Yet she finds herself at a point in life where the pull of transient living bares almost equal weight to the idea of settling down.

Naturally, it’s an exploration of self that begs deeper questions.

The nesting and migratory habits of birds, and community’s role in those habits, proved pivotal to writing and choreographing Nest. So, too, did the seasonality of the peninsula, which Thelen has called home off-and-on for half her life.

The production of Nest coincides with the quiet-season rediscovery, by many, of friends and community in Door County, making Nest an appropriate depiction of Thelen’s concept of nesting.

“People spend more time at home, more time with their family or their community,” Thelen said. “It’s this period of time where you’ve built something up and you’re just stewing in it.”

The 20-minute piece, to be performed against a moody background created by music and an eclectic collection of lamps, finds Thelen expressing her concepts of nesting individually and in sporadic duets with her sister, Kathy.

It is best categorized as postmodern dance. Thelen is a longtime follower of American dancer and choreographer Yvonne Rainer’s school of thought, which Rainer outlined in her No Manifesto, a 13-piece list published in 1965 that sought to “revolutionize dance and reduce it to its essential elements.” She wanted to strip away the pomp and circumstance that dominated classical and modern dance in the mid-20th century in favor of presenting the body as the primary object of movement.

Given the scarcity of dance performances in Door County, and the dominance of easy-to-follow storylines in dances like The Nutcracker ballet, Thelen offers a suggestion on viewing postmodern dance.

In the dance world, it’s called witnessing – watching without judgement, projection or interpretation.

“It’s important to be open to the landscape of it,” Thelen said. “Not trying too hard to necessarily take some big, huge meaning from it and just allowing it to come in and see what it stirs in you because you’re another body watching another body move.”

Nest will be performed Thursday, Dec. 7 at the Baileys Harbor Town Hall, 2392 County Road F. Doors open at 7pm with the performance at 7:30pm. A tap dance duet will open the evening and artwork from local artists will be available for purchase.