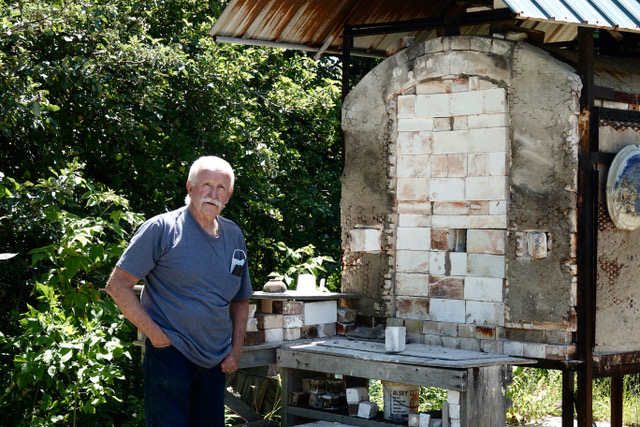 Tony Staroska with his largest kiln. Photo by Tom Groenfeldt

When he got started, however, Staroska did what he calls “production work” – mugs, soup bowls and other practical and salable objects – for about 10 years. Then he shifted his schedule to do production work for six weeks and personal sculptural work for six weeks. Eventually he decided to focus on sculpture – mostly working in clay, but occasionally using wood, steel and bronze.

There’s something physical about working with clay that Staroska likes, from throwing pots on a wheel, to building pieces, to constructing his first kiln out of used fire bricks that he bought for 10 cents each.

In that kiln, he uses a range of firing techniques including pit, saggar, salt, oxidation and raku, which is a Japanese low-firing technique. He knew the raku effect he wanted from seeing the work of others, but at first, he didn’t know how to achieve it.

“It was just a lot of trial and error, trying to figure it out on my own,” Staroska said. “Every three months, I would take three pots and put them in the kiln, ruin them, and throw them away.

“The next group, I got the white ones, and then I figured out how to do colors. It takes the right chemicals and temperatures – there was a lot I didn’t know. But I had seen the things I was looking for in the pieces that failed and knew what I would have to do to correct it.”

Staroksa said that getting raku right took about three years – and many ruined pots – but he figured it out.

It’s all about problem solving. Once Staroska gets an idea, he makes it work. He still recalls a Scientific American article from 30 years ago that said many of the people we call artists and scientists are really technicians.

“When you’re not doing anything innovative or creative or exploring the unknown, you are really a technician,” he said. “The thing I like the best is when I’m trying something new and I don’t know what I’m doing. I feel like I’m standing on a limb and cutting it off, and I’m standing on the wrong side. But I like that feeling, and I don’t mind the consequences when the whole thing goes up in smoke.”

Clearly, Staroska is not afraid of failures or experimenting, and he’s amazed by people who don’t experiment. Some potters may be proud when they go an entire year without losing a single pot. Others may cling to the same glazes they used as a student. By contrast, Staroska’s tried firing with drain cleaner, Miracle-Gro, sawdust, circuit-board cleaner and coffee grounds, among other ingredients.

“I put glazes together that I know will run, and then sometimes you end up with a mess in the kiln,” he said.

But sometimes he winds up with intriguing colors and previously unseen hues, and he and Carlton are always interested in the visual and tactile responses their artwork elicits in the viewer.

They reopened the gallery a few weeks ago after being closed all of last year. Staroska enjoyed the tranquility of that period, but it was hardly time off.

“The pandemic was my most productive year ever because I worked seven days a week,” he said.