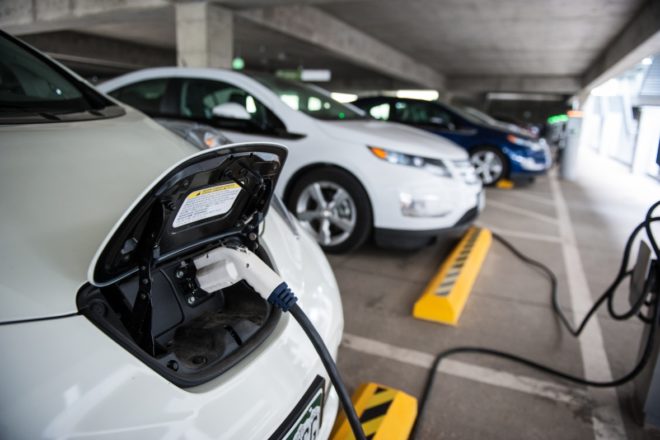 According to the U.S. Dept. of Energy, which provided this photo, “with their immense potential for increasing the country’s energy security, economic vitality, and quality of life, plug-in electric vehicles (PEVs, including plug-in hybrid electric and all-electric) will play a key role in the country’s transportation future.”

Eric V. Powers was born with a name that seems to have been his destiny. He is the owner of EV Powers Hybrid Battery Service and Repair in Madison. He is also coordinator of the Madison Hybrid Group, a group of owners of hybrid and electric vehicles (EV).

“I’ve been working on hybrid cars for almost a decade and I’ve run the hybrid car club since 2004 because I’m a nerd and just like it. I’m a car guy and this happens to be another kind of car and interest for me,” he said.

With that interest, Powers was closely watching the legislation approved in the 2017-19 biennial budget that puts an additional $100 registration fee on EVs.

“This idea has been floating out there for years, but people are so apathetic, no one thinks about it until after it happens,” Powers said.

There was talk of boosting the registration fees of hybrid vehicles as well, but that did not fly in this session, which makes Powers happy since there are four hybrids in his household.

“It may not seem like that much, but every year I would have an extra $300 to pay, and this is a used vehicle, a $3,000 vehicle,” he said. “Percentage-wise, that’s a pretty hefty amount of annual fees. I know it would change people’s minds about buying a hybrid.”

But he also accepts the reality that energy-efficient vehicles have been politicized.

“It doesn’t mean that a hybrid tax isn’t coming,” he said.

Powers said in a perfect world, registration fees would be based on the weight or your vehicle and the number of miles driven.

“As much as I would love to get a coalition of people together and make that happen, the trucking lobby is very powerful,” he said. “It would be really hard to make that happen. From a realistic, coalition-building lobbying effort, I think the best we can do is get owners together to say we don’t agree with this tax. Or make it fair with an extra charge for anything above a certain MPG. My joke is, how about anything above 45 MPG? That would also include Harley-Davidson motorcycles. You throw that out there and people think that’s ridiculous, but are they paying their fair share?”