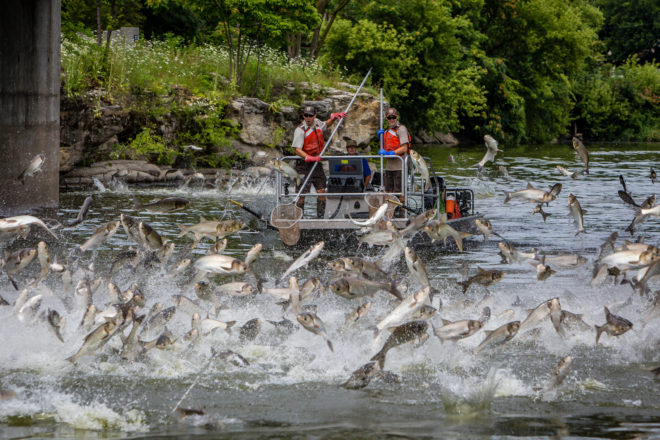 U.S. Fish and Wildlife (USFWS) personnel are surrounded by jumping silver carp on the Fox River in Illinois. Photo by Ryan Haggerty, USFWS.

Acoustic deterrent among ideas to keep them out of Lake Michigan

Bob Wakeman was among the representatives from the eight Great Lakes states and two Canadian provinces who met in Chicago July 16-17 to hear updates from the Army Corps of Engineers about preventing Asian carp from entering the Great Lakes.

“It was a very productive two-day meeting,” said Wakeman, who serves as the Wisconsin Department of Natural Resources’ spokesperson about aquatic invasive species, which include Asian carp.

“The first day, representatives from the U.S. Army Corps of Engineers spoke with us about some of the details proposed for the Brandon Road location. I’ve been participating in meetings with the Corps for quite awhile, and this was really the first time I felt a lot of the details were shared with us.”

The Brandon Road Lock and Dam is on the Des Plaines River near Joliet, Illinois – part of the waterway that links the Asian carp-infested Illinois River with Lake Michigan. Two Asian carp species – silver and bighead – are reportedly only four miles below the Brandon Road dam.

Among the ideas in the $779 million control-strategies plan, Wakeman said the Corps is proposing a bubble barrier to dislodge small fish that could possibly enter with the 14,000 barges that pass through the locks annually with 13 million tons of cargo, updating the electric barrier that’s already in place, installing a flushing lock to flush any organism back down the river, and a sound barrier.

“Asian carp really don’t like the sound from motor boats [which is what make silver carp jump out of the water], so research was done to identify what specifically is bothering them,” Wakeman said of the proposed sound deterrent.

“One of the things the Corps stressed – and [this] is important for states and provinces to remember – [is that] they’re only at a 5 percent design level for any of this,” Wakeman said. “It’s kind of like having a sketch of what you want to do. So there’s an awful lot of unknowns. Still a lot of details to be worked out. Things are going to take some time to iron out. It’s not going to happen tomorrow or next week or next month.

“It’s going to take a number of years to have in place the ultimate plan, but from what I saw at last week’s meeting, it gives me hope. I saw a commitment from the meeting participants that I hadn’t seen for a long time. I think all the state representatives were very interested in working together, so I’m hopeful [that] with that commitment, we’ll come up with a strategy that will be effective.”