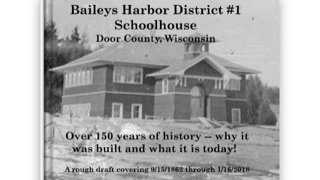 “It’s one of those things that begged to be written,” Kristen Peil said of the book she and her husband, Caleb Whitney, have produced to mark the 100th anniversary of the Baileys Harbor School and the 60 years in earlier buildings that preceded it.

The first village school, a one-room log structure was built in 1858 on Bluff Road, where the post office stands today. The book includes an undated photo from that building, showing a teacher and 20 pupils in front of a huge stove.

After 20 years, the little log schoolhouse was dismantled, and the logs were used to build a granary on a nearby farm. The second building for District #1, a white frame structure with a bell tower, was erected on land that is now the parking lot of the Stella Maris Catholic Church. J. W. Kinsel was paid $60 a month for teaching 100 students. Pictures taken inside and outside show masses of students from very small to taller than the teachers.

The book includes a clipping from the Door County Democrat describing the fire in December 1916 that burned the frame school to the ground. Residents were notified of the calamity by the ringing of the school bell, blowing of the mill whistle and children dispersed through the village to seek help. Volunteers, teachers and students rushed into the burning building to save what they could, but within two hours, nothing remained but a stone wall and the chimney. The building was valued at $4,000, but insured for only half that amount.

The newspaper made a strong case for taking this “golden opportunity” to combine with other towns to build a high school. Older students returned to class the next day in the town hall, which was partitioned so the lower grades could join them after the Christmas holidays.

Kristen’s great-grandmother, Hedwig Peil, was among the village residents who sold land for the construction of the new “prairie-style” school that opened in early 1918. (The deed was in her name, but the check was issued to her husband, Karl.) The new school was designed by Sturgeon Bay architect Fred Crandall, whose plans were discovered in the 1980s, in a basement room under the pavement of Third Avenue. They are reproduced in the book, along with a two-page, color postcard showing Baileys Harbor prior to 1917.

Frank Oldenburg and Henry Seiler were the original carpenters, and Ed Olson covered the outside of the structure with stucco so expertly that it continues to protect the building today. 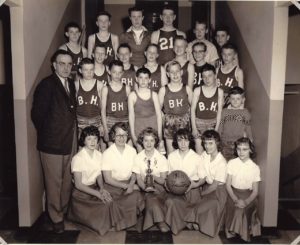 The book includes dozen of pictures of teachers, students and activities from 1918 through 1983, the last year the building was used for classes for first through fourth grades. For four years, the old schoolhouse sat empty. Then in 1987, the town library moved into a former classroom and Annie Peil, Kristen’s mother, moved her retail operation – Orphan Annie’s Gifts, Art and Antiques – from the Liberty Grove Schoolhouse to rented space in the Baileys Harbor building. Kristen joined Annie with her vintage clothing, gourmet coffee, desserts, ice cream and soda. In 1993 Annie and her husband, Loren, bought the old school, filling the rooms with photographs, jewelry, etched glass, refinished furniture, handmade decorative objects, pottery, a variety of reproductions and vintage items and Loren’s handmade furniture. By 2005, all of the retail operations had ended and, with years of intense labor, one room at a time, the building was transformed into seven suites – Orphan Annie’s Schoolhouse Inn.

In 2016, Kristen and Caleb bought the inn from her parents. This year, it has a new name – the Baileys Harbor Schoolhouse Inn.

“History is a scavenger hunt,” Kristen said, “and last winter we finally had time to do the research. Mary Leist at the courthouse in Sturgeon Bay (who went to the Baileys Harbor school for two years in the 1960s) was very helpful. When the school closed in 1983, someone had the foresight to take all the records to the UW-Green Bay Archives and Area Research Center. Affiliated with the Wisconsin Historical Society, it’s an amazing resource.

“People have brought in wonderful bits of history – pictures, grade cards, end-of-year tests for the upper grades. How on earth did you get these? I asked the man. He said he’s been a dumpster diver since he was a kid.

“A fellow who was seriously ill as a child showed me the self portraits everyone in his class drew and sent to him in the hospital so he wouldn’t forget them. It’s magical how many people have been touched by this project.”

Anyone who spent their elementary years in the Baileys Harbor School or had older relatives who were students there will love poring over the pictures and putting names to faces. It’s not only the history of 160 years of education from its beginning in a little lakeside village, but the story of people who valued schooling and made sure their children got the best they could provide.

Beverly Anclam Starnes’ 426-page history of Baileys Harbor from its beginnings through 1880, told primarily through clippings from local newspapers, was a valuable asset. Descendants of long-time teachers Erneld Viste and Martha Honold were also helpful.

This book is not a “one and out.” The cover says it’s “a rough draft covering 9/15/1862 (when the first record is dated) through 1/16/2018.” Since it was self-published, Kristen anticipates that future, small-run editions will be produced as additional information and pictures become available. Copies may be obtained from the inn or go to baileysharborinn.com. It is also possible to preview the book at that location.

The book is dedicated to Annie and Loren Peil “for having the vision to see what the building could be, the drive to make it happen and the skills to get the work done. Without both of you, this piece of living history would be gone.”