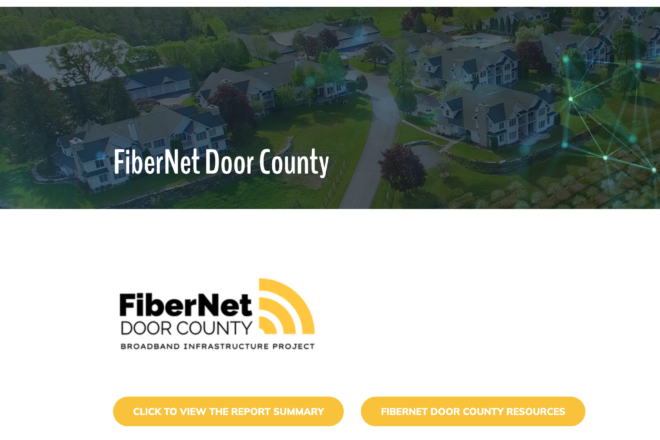 Among the tasks the Broadband Committee will complete is finding the right branding for the county’s broadband initiative, whether it’s affirming the name (above) first developed at https://livedoorcounty.org/economic-development/fibernet/, or selecting something else.

The voices clamoring for reliable, fast, affordable broadband service are not universal in Door County. A number of municipalities aren’t sure whether they want to plan for it, pay for it or even talk about it.

“There are quite a few on the fence,” said Jessica Hatch, the county’s new broadband coordinator. “They don’t know if they even want to establish a committee or want to talk about broadband at all.”

The Door County Broadband Committee wants to change that. Getting all municipalities on board will achieve the vision established in a recently completed assessment for fiber to every business and home. The group convened May 9 for its first meeting since it was authorized last month as an official county committee with oversight of the broadband department consisting of Hatch.

The committee members prioritized a broadband summit to happen sometime in June. All municipalities would be invited and introduced to the committee, to Hatch and to a formalized process for sharing information so that everyone is learning the same things at the same time. They also intend to share a blueprint that municipalities can follow to move forward on grant applications.

The summit could also enable municipalities to form partnerships on projects. Some education would also be involved, such as how to avoid internet service providers (ISP) that “cherry pick” a community’s higher-population centers, leaving the remainder of the community unserved.

“We are running drops to every single home and business on Washington Island,” Cornell said about the island’s broadband fiber project.

“If you don’t do it now and don’t do it right – making sure there is a node at every premise – you’re never going to do it,” he said.

The county took the lead on a peninsula-wide broadband initiative after receiving an assessment late last year. The report outlined the lack of broadband options and access to reliable, affordable, high-speed service. It also provided a blueprint for connecting the whole county with a fiber network, with each municipality working separately, but in unison with all others.

The Door County Board of Supervisors then seeded the county’s lead on the initiative for three years by authorizing the spending of $1 million in American Rescue Plan Act funding.

Kufrin, a former Village of Sister Bay administrator, said they needed to make information easy to find and universally accessible to municipalities, schools and businesses.

“My impression is most people don’t know where to search for anything,” he said. “Even if you know what you’re doing, it’s hard to find.”

A single online storefront is the eventual goal.

The shell of that currently exists as FiberNet Door County, the brand name put together following receipt of the assessment.

“It’s not a product right now; it’s just a term,” Pabich said. “It’s the title of the website, a concept to get communities to rally. We can change that as a group.”

During an upcoming meeting, the committee is expected to develop a strategic-communications plan and clearly define the tasks that county staff can perform to support municipalities in their pursuit of broadband.