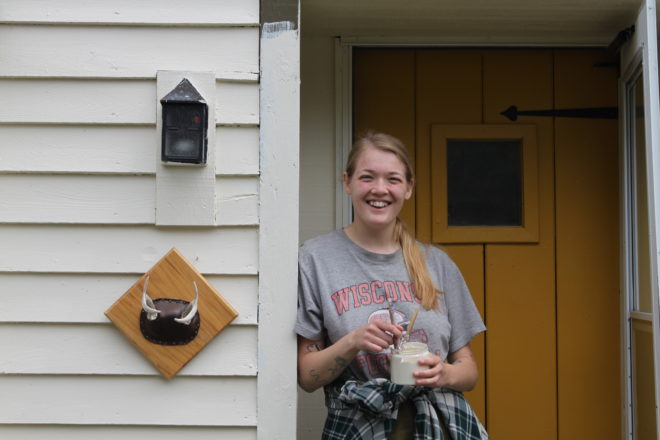 Lucy Hodkiewicz stands in the doorway of The Lightbox as she paints its walls Ephraim-white. Photo by Jackson Parr.

Depending on who you talk to, Ephraim is either the most beautiful and last remaining example of quaint Door County or just the place where old people live so they don’t have to experience change. But as we began compiling the exhaustive list of new businesses opening their doors throughout Door County this year, something strange drifted to the surface.

Now, my expertise on what is hip only goes as far as the next 26-year-old with a vintage Pendleton jacket and a handful of vinyl records – a pretty low bar compared to many in Door County. But the true originality of the people starting businesses in Ephraim and the things they are producing tell their own story.

“We want to see cool stuff happen and we’re dumb enough to try,” said Lucy Hodkiewicz, the new young business owner behind The Lightbox, an all-female home goods and printmaking shop. “I feel like we all think it’s like a new frontier that we’re building together.”

While communities such as Sister Bay and Fish Creek are enjoying expansion of businesses with other locations or the same ownership elsewhere in the county, Ephraim’s new business climate is almost entirely new faces.

Milworks, a men’s clothing store with a location in Milwaukee’s gentrified Third Ward District, plans to open its doors in Ephraim this year. So will Clink!, a craft studio where you can enjoy a glass of beer or wine while creating your own original art. Randy Isely’s artisan Ephraim Coffee Lab is hailed as a destination for refined coffee drinkers. There’s rumblings of another wine and charcuterie bar near Trixie’s, which was Ephraim’s newest restaurant since as far back as I can remember.

Hodkiewicz’s Lightbox sits in the Shorewood Village, a small business enclave that might be considered ground zero for the New Ephraim. Leroy’s, a coffee cult favorite, has long held down the fort at Shorewood Village, but it also features Czarnuszka a Polish-inspired punk rock soup bar whose unconventional advertisements (found somewhere in this newspaper) gained recognition from a global advertising agency. Then there’s Ephraim Clayworks, where potter Ryan Pederson channels James Brown into his funky creations. Shorewood Village is now home to Within Things, a folk-driven curiosity shop founded by renowned percussionist Jon Mueller and his wife, Teresa.

“I think what we’re all trying to do is bring something new to Door County,” Teresa Mueller said. “We don’t sell cherry pies. We wanted to bring another thing for people to come and experience.”

Mueller said part of the reason they chose that location was a feeling that some youthful excitement was brewing in Ephraim, and it wasn’t just beer.

“I don’t think it’s beer and wine per se,” said Mike McCarthy, president of the Ephraim Business Council (EBC), adding that Ephraim’s approval of beer and wine in 2016 turned out to be something of a nonevent.

“Ephraim was, up until a few years ago, kind of the lodging capital of Northern Door,” McCarthy said. “We didn’t have many restaurants. We didn’t have a lot of shops, just the tried and true that had been here.”

Ephraim’s move away from a lodging-driven economy toward a well-rounded marriage of lodging, dining and retail, might not be by choice. Room tax collections in the village have been sluggish the past two years when compared to neighboring municipalities. But the deluge of lodging appears to have left fertile ground for complimentary businesses to sprout.

“Every time something new comes here it’s the first thing of its kind because Ephraim was just lodging forever,” Hodkiewicz said.

The village has even been receptive to mobile food carts, which a neighboring town is having a rather difficult time navigating. Isely’s proposal to serve Ephraim Coffee Lab’s nitro cold brew from a bicycle was denied on a 3-2 vote by the village board, but McCarthy said he and Isely are working with village officials to craft an ordinance that reasonably allows such an extension of an existing Ephraim brick-and-mortar business.

“No one’s advocating for a crazy change but we do have to push our community a little bit forward,” McCarthy said.

Although there are no references to Andersons, Moravians or cherries in these new businesses, Ephraim traditionalists can rest easy. Their storefronts are still white. At least, most of them.