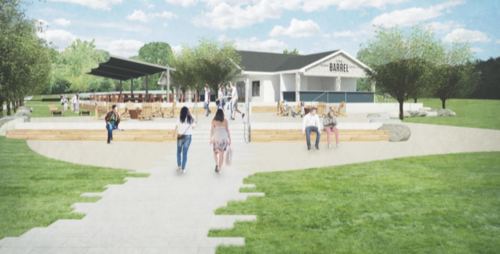 Door County’s winter months aren’t as slow as they once were, especially when it comes to businesses opening and closing. Several big moves and openings have been announced or completed, or are underway as of January, but unfortunately, there are a few closings as well.

Get Real Cafe, which had shut down its Madison Avenue location to move operations to the Hitching Post, kicked it into reverse and reopened in its original location. Owner Veronica Ripp serves up healthful fare for breakfast and lunch daily at 116 S. Madison Ave. in Sturgeon Bay.

Across the bridge, the much-anticipated Cherry Lanes Arcade Bar finally opened its doors after months of painstaking work by owners Kevin and Erin Bosman. The Fourth Avenue bar, bowling alley and arcade venue has quickly become a hot spot for locals and families.

Skip Stone Coffee Roasters opened its doors in Sister Bay. It’s the newest venture from Wild Restaurant Concepts, the group behind Wild Tomato and Bier Zot (and a couple of new ventures you can read about below). Owner Britt Unkefer’s first foray into coffee is located across the street from Wild Tomato’s Sister Bay location.

Greg and Debbie Casperson announced the sale of Casperson Funeral Home to Huehns Funeral Home of Sturgeon Bay. The Casperson building in the center of Sister Bay was not part of the sale, which ends 97 years in the business for the Casperson family.

Marise Redmann and Ken Smith, the longtime owners of the Settlement Courtyard Inn and Lavender Spa, announced the sale of the Fish Creek lodging establishment to Jody and Ryan Gallant.

Fireside Restaurant, formerly of Ellison Bay, opened at its new location in the former Liberty Square building in downtown Egg Harbor, but owners Blake and Lauren Schar aren’t done with the Fireside’s move. They’ll be adding a lounge with bar games to the restaurant, and Bagels and Beignets will soon open at the other side of the building. Plus, Jennie Bexell will open a second location of her popular Sister Bay clothing store, Spot, in the space later this spring.

Sonny’s Pizzeria opened its long-rumored brewery at its location at the foot of the Michigan Street Bridge in Sturgeon Bay. Bridge Up Brewing serves the brews of head brewer Trent Snyder.

Work is underway on the new One Barrel Brewing Company taproom in Egg Harbor in the former location of the Decorator’s Gallery, and owner Peter Gentry is planning a May opening. One Barrel won’t be cooking, but Wild Tomato will be – offering a carry-out location at the taproom where customers can sit at picnic tables or carry their food into the taproom.
Speaking of Wild Tomato, owner Britt Unkefer will have his hands full next summer. In addition to the new Egg Harbor location, he has announced plans for a wood-fired kitchen concept in the former Yum Yum Tree location in Baileys Harbor, which he bought last fall.

Sturgeon Bay will soon get another infusion of youth with The 108 Creative Collective in the old Bank of Sturgeon Bay building at 108 S. Madison Ave. Discourse Coffee founder Ryan Castelaz describes the space as an ideas incubator that will be home to Lawless Coffee, a gallery and a pop-up restaurant concept called Heist.

Peter Sloma, anticipating traffic hangups in Fish Creek next summer, will open a second Peninsula Bookman location in April in Sister Bay. That will be located at the former home of BookWorld in the Country Walk Shops.
The remodel of the Piggly Wiggly is well underway in Sister Bay, where employees are maintaining a great attitude as they work in an ever-changing construction environment. The work is targeted for completion by Memorial Day weekend.

In downtown Sister Bay Goose & Twigs lodging and market is nearing completion on Mill Road and is expected to open this spring.