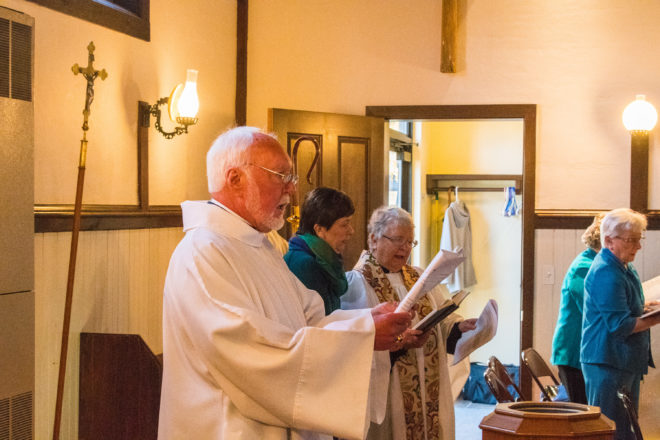 Countless people retire in Door County. And many of them, finding they’re not as ready as they thought they were for a life of leisure, look for something purposeful to fill their time.

The Rev. Olin Sletto is one of these people. The difference is that both his new career and his backstory are far from typical.

Last Saturday Rev. Sletto was installed as vicar of Christ the King Church in Sturgeon Bay and Holy Nativity Church in Jacksonport. Nothing unusual about this for a man who attended seminary after college, was ordained in 1973 and devoted 41 of the past 43 years to religious service.

Nothing unusual, that is, except that both Christ the King and Holy Nativity are Episcopal churches, while their new vicar is a life-long Lutheran. The congregations had been without a vicar for a year, and Sletto, who had retired to the Jacksonport area in 2014, found that three months of reading on the beach was more than he could abide.

In 1999, Lutherans and Episcopalians agreed to “a call to common missions,” including an agreement to exchange clergy. “In some places, they even worship together,” Sletto said. “Actually, the theology is very similar. Perhaps the greatest difference is that Episcopalians believe in the concept of Apostolic Succession – an unbroken link between the apostles and modern clergy – while Lutherans don’t accept that the connection has never been broken.”

When Sletto interviewed with the Episcopal bishop, he told him that his goal was for the churches to be involved in missions, to be active and to grow. He notes that while not everyone in his new congregations was excited to have a Lutheran pastor, things are going well. He began serving the churches in June. “There were some questions,” he said, “but everyone has been very gracious in accepting me.”

Sletto feels that a successful ministry must be based on accessibility and visibility, underlying the basic principle that everyone is welcome and accepted. “I love,” he said, “that both these congregations are open and welcoming. All people are invited to experience God’s unconditional love in Jesus Christ. There are no exceptions. We want to make going to church as easy as possible.”

A welcoming atmosphere can be expressed in many ways besides the friendliness of the congregation. Christ the King is in the process of providing better parking facilities, and its red doors are wide open every Sunday morning. In December, a mailing will go out to every home in Sturgeon Bay and the Jacksonport area, inviting participation in Christmas activities in the two churches.

In 2008, Sletto and his wife, Connie, bought land on Hwy. 57, overlooking Lake Michigan. The home they designed was built five years later, anticipating his retirement in June 2014. They moved to Door County that August, but retirement didn’t last long. “I thought it was going to be great,” he said. “All that free time to sit on the beach. But I found I couldn’t just sit and read a book. I just couldn’t do it.”

Within three months, he called the Sevastopol School District to see if they could use a volunteer. From early November to Christmas, he went to school every day, just watching and listening and absorbing the culture. He spent three mornings a week for the next year working with third graders and afternoons working one-on-one with fifth graders. “My undergraduate major was English,” he said, “so that’s where I could be most useful. They asked if I could help with math, and I told them I had a bachelor’s degree, two master’s and an honorary doctorate, but no, I could not do fifth-grade math.”

After a year, Sletto’s wife reminded him that he was supposed to be retired, so he spent the next year cutting back – going to Sevastopol just two days a week. By then, he was beginning to feel a call to return to service in the church. He explored some possibilities in Lutheran churches, but none of them worked out. And then a friend gave his name to the Episcopal hierarchy.

The Celebration of a New Ministry service on Nov. 5 began at 10 am at Christ the King and progressed, after the sermon by The Right Reverend Matthew Gunter, Bishop of the Episcopal Diocese of Fond du Lac, to Holy Trinity for the institution service and a reception in Jameson Hall. Bishop Gunter installed Sletto as vicar and John Koski, who works in the special education department at Sturgeon Bay High School, as deacon.

Sletto comes to his new churches with a background that is not only unique, but surely one of a kind. He grew up on a ranch near Draper, South Dakota, received his bachelor’s degree from Augustana University in Sioux Falls, his Master’s of Divinity (the first of two master’s) from Luther Theological Seminary in St. Paul and was ordained in June 1973. He had long felt a call to serve in Africa, either in the Peace Corps or as pastor of a church, but he had become engaged during seminary, and living in Africa was not high on Connie’s agenda. Still, when they were offered a job in Ethiopia, she agreed. When, at the last minute, their assignment was changed to the Central African Republic, they said yes before dashing home to look it up in the encyclopedia. “We didn’t have a clue where we were going,” Sletto said.

Because their destination had been a French colony until 1960, the couple spent most of 1974 studying French in France and Cameroon. For the next 15 years, Sletto worked as a missionary of the American Lutheran Church and the Evangelical Lutheran Church in America. His first job was teaching Bible classes to 40 students who were preparing to go out as lay evangelists. Connie worked for the church in literature production and distribution. After four years as a teacher in the Bible School, Sletto was named its director, responsible for 40 families, building 40 student homes, a literacy building and many primary schools.

During these years, the couple’s children, Carrie and Johann, were born in a mission hospital in Cameroon. Because there were no schools for them where their family lived, both had to leave home at age seven to attend a boarding school in Cameroon, a two-hour drive.

By 1989, Sletto was beginning to feel the call to this particular mission slipping away. Carrie was an eighth grader. If they continued to live in the Central African Republic, she would have to attend high school in Nigeria, an unstable country more than 1,100 miles away. They requested a new assignment and were transferred to the Chicago area, where he spent the next dozen years working for the Division for Global Mission of the Evangelical Lutheran Church in America, serving as program director for French-speaking Africa and the island nation of Madagascar.

He made four or five trips a year to Madagascar, the Central African Republic, Cameroon and Senegal, supervising all the programs the Lutheran Church was funding in those countries. He worked with up to 55 missionary families, was responsible for a $3 million annual budget and facilitated and reported on up to 70 programs in companion churches. He is especially grateful for the fact that the church never placed restrictions on who he could serve. Senegal, for example, is 98 percent Muslim, but it received services along with southwest Madagascar, where there was just one functioning well in a wide area experiencing drought and famine.

In 2002, after 15 years in Africa and 12 years of global ministry work, Sletto was called to serve as pastor of Holy Trinity Lutheran Church in Elgin, Ill. It was his first church pastorate. “Someone in the congregation asked the chairperson of the call committee, ‘Why are we hiring a pastor with no experience in a local church’,” Sletto recalled. “The response was, ‘Because he has a different world view, even a different understanding of theology’.”

“Holy Trinity was a wonderful place,” he said. “It dated back to 1903 and had 450 members. But after 11 years there, I was tired. I wanted to retire then, but the congregation encouraged me to continue for one more year. So it was 2014 before Connie and I got to Door County.”

You know the rest of the story. The Slettos love to travel and have for a long time vacationed every year in a different foreign country. Right now, they’re planning a trip to Hungary – not only to see the tourist sights but, as they always do, to soak up the culture and history. But, even though his position at Christ the King and Holy Nativity is part time, he’s not thinking of taking time off any time soon.

“There’s so much work to do,” he said. “And, since the congregations were without a pastor for a year, I want them to get used to the idea that there will be worship every Sunday.”

Sletto’s former church had 450 members. Christ the King may draw 20 people on a Sunday when tourists visit and the snowbirds haven’t left yet. Holy Nativity is a bit larger. “Isn’t it funny,” Sletto recently exclaimed to his wife, “that we had 220 to 250 in church every Sunday in Elgin, and now I get so excited about 35!”