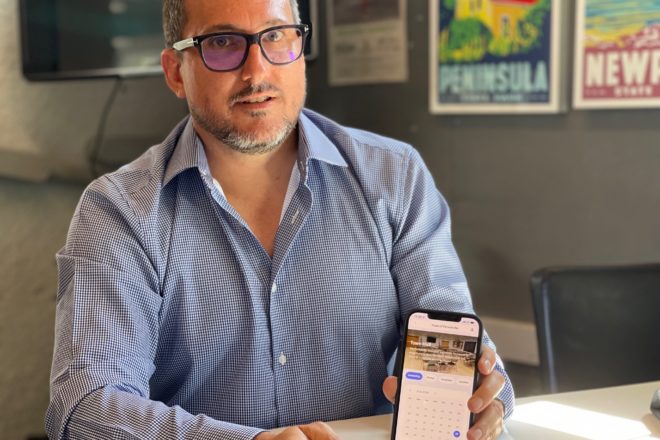 Dustin Overbeck, founder and CEO of HeyGov, displays one of the apps from his e-government management-software company, which provides a suite of tools to allow online transactions for everything that was previously done on paper. Photo by D.A. Fitzgerald.

Dustin Overbeck’s company Town Web, a builder of municipal websites that he founded in Door County 15 years ago, suffered for a while during the height of the pandemic when towns, villages and cities weren’t meeting in person or reliably achieving quorums. That meant no one could sign checks, which was how the majority of the company’s government clients still paid their bills.

“So there was no mail from municipal clients, and no cash came in, and wow – they have a hard time operating online,” Overbeck said.

The idea germinated; he came up with a solution; and he launched his new company, Hey Gov, in 2021.

The e-government management-software firm provides a suite of tools to allow online transactions. No longer would someone who wants to rent the town hall, for example, need to print out the web form, fill out the paperwork, then drop it off in person or mail it with a check.

HeyGov has apps for online payments, venue reservations, utility payments and even 311 reporting for residents who want to alert the town about a pothole or grafitti. They have form building that uses conditional logic, online signatures, payment integration.

“But the big thing is the workflow,” Overbeck said.

If someone fills out a liquor-license application, for example, the workflow takes over, passing the tasks along from the municipality to the law-enforcement agency that conducts the background check, back to the municipality, and then on to the governing body. After approval, HeyGov sends the applicant an automatic email.

Overbeck believes the company will digitally transform government transactions the way Airbnb has digitally transformed the housing-rental market. He may have a biased perspective as the CEO and founder of the company, but he’s not the only one who sees its promise. Last month, HeyGov earned a first-place award in the Information Technology category of the 19th annual Wisconsin Governor’s Business Plan Contest.

Representatives of the contest’s 13 finalists, HeyGov among them, were required to deliver seven-minute pitches live during the June 1 Wisconsin Entrepreneurs’ Conference, and the winners were announced the following day.

Overbeck practiced his presentation by walking up and down, got a haircut that looked as though he hadn’t gotten a haircut and wore funky socks to remind him that he wanted to have fun.

“Most businesses that win are located in Milwaukee and Madison,” he said. “It’s noteworthy for a business in Door County to win first place.”

Overbeck and his story are homegrown in Door County. Now 48, he grew up in Southern Door but graduated from Sevastopol High School. It was during a time when technology and the internet were just beginning to change the everyday world, and he was all in with an Apple II computer even before his school had them.

“The internet was just amazing to me,” he said. “When I saw what websites were, I wanted to know how to build them. So I did, for businesses and nonprofits.”

After high school, Overbeck went to UW-Stevens Point, majoring in foreign languages and international studies. From there, he got an MBA. His aspirations at the time?

“I wanted to travel the world,” he said – and he did, living in Italy for a few years and Romania for a while.

“But we have a house here in Door County,” he said, and that’s where he and his wife, Lasira, returned in 2001.

Around then, Overbeck’s uncle – the late Leo Zipperer, longtime Sevastopol Town Board chair and Door County Board chair – hooked him up with Sevastopol to build the town a website. Municipalities didn’t have websites back then, and Overbeck wanted to make it easy to operate and non-static so that it wouldn’t require a programmer to make code changes.

Working with a developer in Romania, Overbeck created a municipal website that led to the success of his first company: Town Web.

“Two years later, the Town of Jacksonport wanted a town website, so we took a majority of the code and added it to Jacksonport and built it,” he said.

At the time, Overbeck operated from another Door County company, Door Peninsula Internet. He bought an identical server on eBay, physically plugged it in, paid the company a set monthly fee and designed and hosted his own websites from there.

“We did that for many years until a tractor was plowing and severed the [underground internet] cable in 2005-06,” he said. “No redundancy back then.”

Still, municipalities were just starting to need websites for all kinds of purposes, including posting public notices, and there wasn’t an easy solution for them at that point. Overbeck kept going and officially founded Town Web in 2007.

By 2008, and with a focus on websites for towns, villages and cities, the company had reached its break-even point of 73 customers. By 2014, he had 250 municipal customers.

“Now, we have over 600 customers in 40 states,” he said, with 12 of those in Door County, from Gardner to Washington Island.

With Town Web managed by a promoted employee, Overbeck has devoted his time to HeyGov. He currently has 19 customers in five states, and the Town of Forestville was his first Door County customer. Residents there can rent the town hall or park pavilion on the app and see news and notices that will take them to the municipal website – designed by Town Web.

Overbeck’s business model with Town Web was organic growth. With HeyGov, however, time is more of the essence because American Rescue Plan Act funds that can be spent on the technology are sitting in municipal coffers.

Since winning the contest, he’s been meeting with investors and applying for various startup accelerator programs. He’s also building out a sales team to sell the HeyGov software nationally. Overbeck’s goal is to raise $750,000 by the end of July to help fund the next year or two. After that, and using the vetting from startup accelerators and angel investors as a kind of capital, he’ll seek venture capital to grow.

“The market opportunity is national,” he said. “It’s not just a fad; it’s a movement. People want to pay online and do things digitally.”