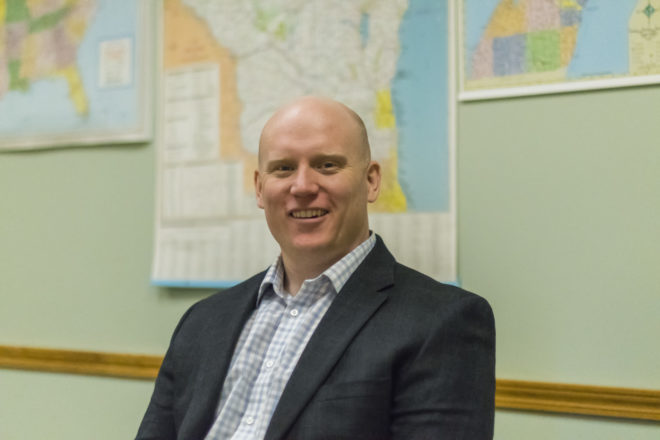 Eighty-seven days into his job as only the second executive director of the nearly three-decade old Door County Economic Development Corp. (DCEDC), Caleb Frostman said he is inspired by the engagement and passion of the people of Door County.

“I don’t know if I’ve been anywhere like this with people as enthusiastic and engaged,” he said.

Frostman is a Green Bay native who was chosen in November to replace Bill Chaudoir, who retired in December after 27 years leading the DCEDC from its founding in the late 1980s into the 21st century.

“Bill has been great. I’ve bounced ideas off him,” Frostman said. “I’m also grateful to the staff for giving guidance. I’ve got a very engaged board, and I’ve already made some good friends. It’s not that I’m this gregarious guy that everyone wants to be friends with, but people are just really outgoing and friendly here, which I have been really grateful for.”

Yes, he said, there has been some culture shock. After graduating from the University of Wisconsin-Madison in 2007 with a degree in real estate, Frostman went into banking in Minneapolis, specifically commercial real estate lending, where he spent the next decade of his life.

“It’s definitely a big change coming from a metro area of four million to a county of 28,000. There’s been some culture shock,” he said. “The Twin Cities are a great place for a young person to be. A lot of outdoor opportunities. I’m a big hunter/fisher guy.”

So the great outdoors of Door County was a natural draw for Frostman, but what else induced a big city commercial lending banker to make the move to Wisconsin’s thumb, where economic development appears to have as many challenges as opportunities?

“Super-cliché, when I turned 30 I said, I don’t like what I’m doing. I wanted to be closer to family,” he said. “My mom and dad are in Green Bay and Stevens Point, respectively. So I started looking at options and here I am. Banking was very good to me and it was a comfortable existence, but I wasn’t using my time, talent and energy to affect the greatest number of people I could.”

Frostman said in terms of making a wider impact, he initially was thinking of “being a straight-up do-gooder in fundraising for the United Way or YMCA. I had some pretty robust experience with some nonprofits, so maybe I could be a development official.”

Then he heard about the opening at the DCEDC.

“I thought it was a pretty good marriage of where I’ve been and where I wanted to go,” he said. “I dove in head first and it became my top choice immediately.”

He started doing research on Door County and the DCEDC and suddenly, he really wanted this job.

“It really helped that I was buying what Door County was selling. I wanted to be closer to nature and family. It helped that I really, really wanted what Door County had,” he said. “I did a lot of prep work for the process, but it didn’t feel like work because I wanted it so badly. I felt excited and really enthusiastic about the opportunity.”

Mentioning that he did research on Door County led to the inevitable question of what he knew about Door County as a Green Bay native.

“Growing up in Green Bay, I really feel like we took Door County for granted,” he said, adding that he maybe camped in the county half a dozen times and made a visit to Washington Island. “In Green Bay, we saw it as a tourist destination for Illinois folks.”

While that perspective might be skewed, Frostman said it can only help his development efforts to know how others perceive Door County.

“I’ve been doing a lot of listening thus far, which I think has been very helpful,” he said.

He’s well aware of the many challenges – more jobs than workers, a declining population, the exodus of bright young people from the county and the need to attract more young people back, overcoming all the negative publicity Sturgeon Bay has attracted around the state with the westside waterfront development project, and the ever-present polarity between northern and southern Door.

“I really want to reach out to all of Door County, to northern Door and southern Door. I want to make sure we’re engaging with entrepreneurial folks on the peninsula,” he said. “As important as Sturgeon Bay is as an economic engine for the county, and it certainly is and I have no intention of changing our efforts there, I want to expand our focus to make sure the folks in other parts of the peninsula are feeling the love.”

Regarding the lawsuit filed against the City of Sturgeon Bay by a group of concerned citizens that resulted in a judge declaring the city could not sell a parcel of waterfront property to a private hotel developer, Frostman said if the parties work to get that right, that should resolve any questions observers around the state might have of development in Door County.

“It does slow the process,” he said about inviting new development to the area when the city is involved in a development lawsuit. “I think it’s really important for the parties involved to get it done right. It’s in a tax increment district and the city definitely has an interest in getting that developed sooner rather than later, but if we get it right it shouldn’t be a problem.”

Frostman also pointed out that the last big initiative rolled out of the DCEDC under Chaudoir’s direction was the Grow Door County – A Workforce for the Future, a four-year plan unveiled last September to address many of the challenges around the aging workforce, the inability to retain and attract young people to the area, and the need to find more seasonal workers.

“There is no silver bullet,” he said. “It will be a team effort. We’ve made some headway and I’m excited about it. I’m grateful there is a structure in place for some of our bigger initiatives and I don’t need to come and recreate the wheel.”

More than anything, Frostman has been buoyed by the reception he has received so far.

“Everyone is respectful about Bill and his legacy, but everyone has been very encouraging,” he said. “People have said in no uncertain terms, ‘We want you and your organization to excel.’ It’s nice to have folks in your corner. I feel that.”