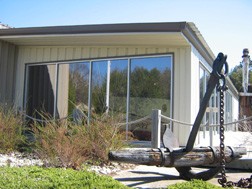 The Door County Maritime Museum at Gills Rock opened May 23, with the debut of the new Death’s Door exhibit. The museum introduced a new interactive technology called Augmented Reality. Using a tablet provided by the museum or a personal smart phone, visitors will experience maritime history in a new way.

Death’s Door may be famous for having lent its name to both the Door Peninsula and Door County, but this strait of water that passes between Washington Island to the north and the Door Peninsula to the south is rich in history and legend.

The exhibit explores the origins of Ports des Morts, as it was referred to by French explorers, all the way back to the Native American tribes and the legends associated with them.

Some of the many shipwrecks that went down in the treacherous strait are explored as well as thrilling accounts of the hearty fishermen who regularly work its waters.

The popular commercial fishing exhibit has been expanded with the tug Hope continuing to serve as its centerpiece. Visitors have the rare opportunity to explore, inside and out, the 45-foot wooden fishing boat. It was built in 1930 by Sturgeon Bay Boat Works and owned by the well-known Stanley Voight fishing family. A video of the tug’s final fishing trip in 1992 is also part of the exhibit.