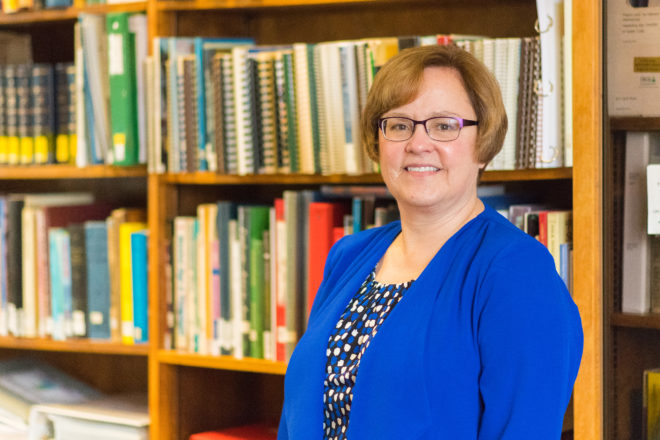 The Door County Library marked a new chapter in its 64-year history April 3 when it welcomed Tina Kakuske as its new director.

A 23-year veteran of the library world (and former professional classical flutist), Kakuske comes to Door County from her hometown of Beloit, Wisconsin, where her love of literature was nurtured as a child in the familiar places of her neighborhood.

“I’ve always liked books and I always went to the library,” Kakuske said. “I grew up in Beloit and they had a wonderful, old Carnegie Library there that I grew up going to as a child and loved, and then eventually they outgrew the library and the library moved into the post office building in Beloit and my grandfather had worked there so I was really comfortable going in there. It was kind of a neat childhood going from one library to the next. Now the Beloit Public Library is in an old JCPenney building in Beloit, which I used to go to as a kid growing up.”

For the past five years, that is where Kakuske worked, first as circulation manager and after earning a master’s degree from the University of Wisconsin – Milwaukee in 2013, as head of adult services. In that role, she led the collection development team, served as head of reference, and organized adult and teen programming – a role that has become more important as libraries across the country adjust to the changing needs of their communities.

For Kakuske’s part, programming proved to be both her greatest challenge and accomplishment. This despite having come into library work in the early ‘90s when the introduction of the internet led many librarians to fear its impact on their workplace. Kakuske was not one of them.

At the time, she worked as a part-time clerk at Eager Free Public Library in Evansville, Wisconsin, and relished the speed at which library employees were able to complete tasks that once took hours to do. It freed her up to spend more time shifting the community’s perspective on libraries through unique programs.

“It felt like it was a challenge of programming for me because libraries have seen their numbers go down in how many things are circulating, also in how many people are walking through the doors at libraries,” Kakuske said. “In the age of Google and when you can get all of your information from the internet, people started to not look at libraries so much as an information place, but we still are actually. When I was on the reference desk, we’d have calls all day long, people asking questions, so that really hasn’t gone away but the perception is that Google is taking over the world of information. And we use Google at the library to get information! With that happening, fewer people were coming into the library. Other entities like YMCAs, school events like plays, music concerts, all these other things, people had a million things to choose to go to and one of the last places they started to think about in my estimation was the library because it’s ‘just books.’ The idea is: why are people going to these other things? And how can we get them to come to the library? It’s a programming mindset.”

In Evansville, she created programs for nursing homes and assisted living facilities that encouraged social interaction through sharing of memories. In Beloit, she pushed for more outside-the-box programming, like a Green Bay Packers day complete with tailgating and a historical presentation, and eventually a music program called [email protected], a play on the library’s address, that went far beyond what is considered typical.

“Nobody expected a Civil War re-creation band to be playing in the middle of the library, so that’s what the thinking-outside-the-box thing is about,” Kakuske said. “I was able to hire a band called the 1st Brigade Band, which is out of Broadhead, Wisconsin, and asked them to come and play in the middle of the library. We had over a hundred people come for that concert. People got to see the library in a different way.”

It is a concept she hopes to carry on in her work as director of the Door County Library and its eight branches. In her first month on the job, she has considered herself “a sponge. I just want to take in everything I can.” She is currently on a local library tour and has begun her first unique mini-program: a “Which branch is it?” series of photo posts on the Door County Library Facebook page, encouraging interaction between the library and its patrons in a new way.

As Kakuske said, “Interaction makes things better.” With that, she added: “We know you love the libraries in Door County but what can we do to make you love them even more?”