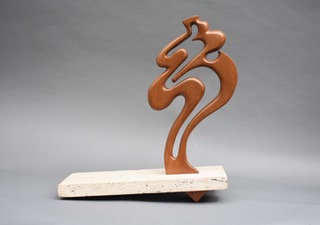 Gills Rock artist Michael Harper will have a debut reception Sept. 7, 4-7 pm, at the former Gallery Ten, 12625 Hwy 42 in Ellison Bay. Charlene Berg will host the reception to showcase Harper’s wooden-sculpture series, The Woodland Spirits – a whimsical and romantic tribute to the social life of trees – and Burn Before Viewing, in which Harper reveals the character and potential of wood that was previously destined for the fireplace.

Of his Woodland Spirits series, Harper said, “While not sentient beings, trees ‘act with intent’ and respond with understanding. I hope to reveal a glimpse into this invisible community of noble spirits.”

Of his Burn Before Viewing work, he said, “No two pieces of wood are the same, and in sculpting, there is no certainty of outcome. Like the gold miner’s swirl of sand and mud, some reveal little and are returned to the wood pile. But when a glimmer surfaces, it is as satisfying as any purposely designed sculpture.”

Harper will donate a portion of the proceeds to One Tree Planted’s reforestation efforts in this country and abroad.