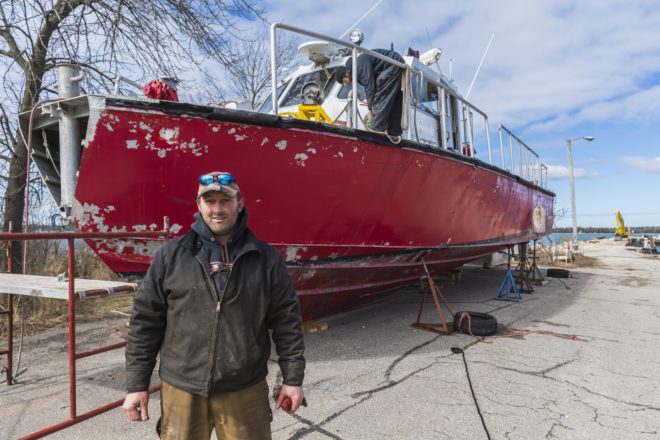 Mike Cole had been keeping his eyes on a retired New York City fireboat that was offered for sale in a marine periodical for about 18 months when he finally bit.

“A guy bought it from the city at auction,” said Cole. “I contacted him and he wanted a lot for it. Apparently, nobody wanted it and the price kept coming down. Finally, we were able to make an arrangement.”

Cole was interested in adding the 52-foot fireboat to his Baileys Harbor business, Iron Works Construction. He was interested in the boat because he knew the quality of the workmanship of its well-known builder, Gladding-Hearn Shipbuilding of Somerset, Massachusetts.

“It’s an aluminum hull. The hull is what I wanted, the design and size,” Cole said. “And it’s got two giant engines. The fire department wants it to go real fast. For the boat size, it’s probably double the horsepower it would normally be.”

The fireboat was commissioned in 1993 and named the Kevin C. Kane, in honor of a probationary firefighter who died in the line of duty in 1991. According to New York Fire Department literature, the Kane will hit 28 knots (approximately 32 mph) and its water cannons could pump 6,400 gallons a minute. The Kane served the NYC Fire Department Marine Division for 20 years before being replaced by a bigger, faster fireboat, but during that time she went from a supplementary vessel to the principal fireboat assigned to Marine Co. 6 in the Brooklyn Navy Yard. It was one of the responders to U.S. Airways Flight 1549 on January 15, 2009, when that craft struck a flock of Canada geese and lost engine power, forcing the pilots to ditch the plane in the Hudson River, an incident known as the “Miracle on the Hudson.” 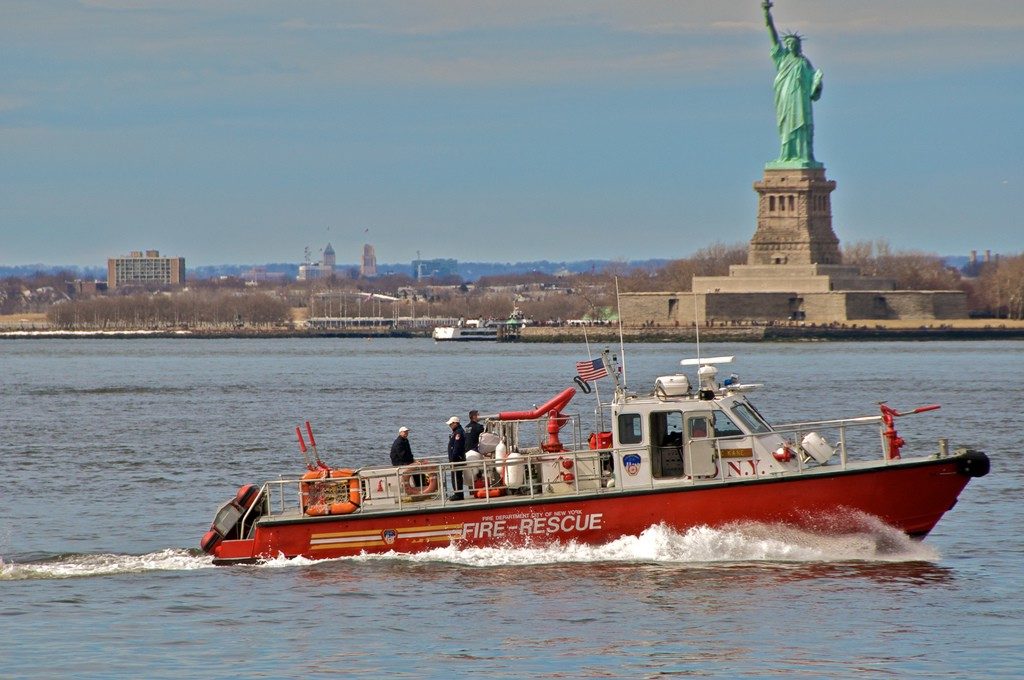 At a ceremony with the family of Kevin Kane after the Kane was decommissioned, Capt. Louis Guzzo of Marine Co. 6 said, “It was a solid, very reliable boat. It would always just keep going. It never stopped or failed us.”

In honor of that history, Cole is keeping the name Kevin C. Kane for his boat, but it will look significantly different.

Cole removed the water cannons from the deck and the piping that took up much of the beneath-deck space.

“It was solid piping inside,” Cole said. “You wouldn’t believe how much piping was in there. You could hardly move.”

Cole guessed he will have somewhere in the neighborhood of 4,000 to 5,000 man-hours before the Kane is converted for his purposes.

“This is going to be a several-year project,” he said. “I can only do it in my spare time. And it’s going to be a huge project. A new pilothouse and a third deck, a small pilot deck for a high line of sight to see over barges. That’s a lot of work. It needs a rear platform so that it’s indestructible on all four sides. The engine system is bulletproof. My last tug I had to do the engine and drive system, so I look at this as a smaller project.”

Once the renovations are complete, Cole said he will use it as a tug for towing, pushing barges and other heavy-duty jobs.

“I have another tug about half the size of this one. Now I can do it safer, and safer is always better. Maybe a little faster, too,” he said.

While it’s fascinating that he is converting a former New York City fireboat into a formidable tool for his business, the story of Cole’s journey to pick up the boat and sail it home to Baileys Harbor through the St. Lawrence Seaway turned into an epic journey.

“I kind of got tricked into going out there,” Cole said. “Everybody’s a salesman. This guy told me it was seaworthy and it could make the trip back to Wisconsin. I didn’t believe that 100 percent, but I thought it would be in pretty decent shape. It was just in shambles. They had put batteries in it and they did nothing. So we had to work on it for a week, me and one of my guys and three of his guys, to where we could do a decent sea trial. We did about a 60-mile sea trial and found more problems. So we had three more days at another boatyard to get it seaworthy enough to bring it back here. It was probably 10 days total just to get it ready, working on it 12 to 14 hours a day, after being told it was seaworthy. I got another price adjustment because of that, and that guy was paying for all of it because it wasn’t my boat yet. A lot of it was maintenance that I had to do anyway, so it wasn’t terrible that that happened. Ninety percent of the general maintenance that did not get done in the last four years is now done.”

But a journey that he originally thought would be nine or 10 days stretched out to 23 days.

It was late fall when he and his crewman, employee Dave Haffmen, began the trip back to Baileys Harbor.

“The trip back was a lot different than everyone led me to believe,” Cole said. “One nice thing, every marina was closed so we had room, but there were zero places to get fuel. We had enough fuel to go two-and-a-half days, so that second day, we started calling fuel companies. We learned real quick that you can’t say you need to fill a boat. We just said we had a fuel tank to fill. We had to go through 20 people before we found one that wasn’t scheduled three days out. Sometimes we had to pay an extra emergency fee, but it all worked out somehow.”

At Oswego, New York, on the southeastern end of Lake Ontario, they ran into 12-foot waves.

“We learned real quick what the boat could handle. It could handle the waves but we couldn’t,” he said. “After about two hours we had to pull into Fair Haven [a New York community with a safe harbor about 13 miles south of Oswego] and just wait it out for half a day. The next morning we were on our way again.”

“We were facing an 18-hour wait to go through the canal,” Cole said. “Then they found out we were a fireboat and they gave us commercial status and we got through in four hours instead of 18 hours. It cost 240 bucks and you need a minimum three-man crew. We only had two. We had to hire a third crewman. Luckily, we had four hours to find somebody.”

They were able to find a retired canal employee who brought his bike on board and rode it home once the Kane made it through the canal.

The voyage took 13 days. “You lose track of time,” Cole said. “I didn’t know what day it was. I was in that engine room all day long every day.”

Ultimately, Cole said it was a fun trip.

“Staying on the boat, it’s kind of like camping, I guess,” he said. “I don’t know why people like camping, but it was fun because it was a challenge.”

The Kevin C. Kane was commissioned in September 1993 as a New York City fireboat and was named for a 30-year-old probationary firefighter who died as the result of injuries suffered while searching for squatters in a vacant building that was on fire in September 1991. A burning ceiling collapsed on him and he received life-threatening burns. As a ladder was being raised to his location, Kane jumped from a window. He died the next day. Kane had only been on the job for 10 months.

A 23-year-old squatter was ultimately charged with arson. Kevin Kane was also the son of a retired assistant fire chief.

During its 20 years of service, the Kane responded to many fires throughout New York City and played an important role in the response to the January 2009 “Miracle on the Hudson” when U.S. Airways Flight 1549 had to be ditched in the Hudson River.

The Kane was replaced by a larger vessel capable of traveling at 45 knots, dubbed Bravest.