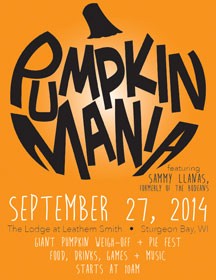 The family-friendly Pumpkinmania! event will take place on The Lodge at Leathem Smith’s expansive grounds on Sept. 27, 10 am – 5 pm, and will feature the weighing of giant pumpkins carefully grown to a massive size of thousands of pounds. The pumpkin weigh-off has been sanctioned by The Great Pumpkin Commonwealth (GPC), a worldwide sanctioning body that provides a set of standards for similar events throughout the world.

Pumpkinmania! is providing cash prizes to the growers of pumpkins — based on the GPC’s official weighing process — that are selected for the 1st ($5,000), 2nd ($3,000) and 3rd ($2,000) prizes. Growers of other unusually large vegetables, plus growers of the “prettiest pumpkin,” ”ugliest pumpkin,” and other official categories will be awarded additional prizes amounting to $5,000. The GPC-sanctioned weigh-off will take place from 1 pm to 5 pm during the festival.

The Lodge at Leathem Smith is located at 1640 Memorial Drive, Sturgeon Bay. For more information call 920.743.5555 or visit thelodgeatls.com.