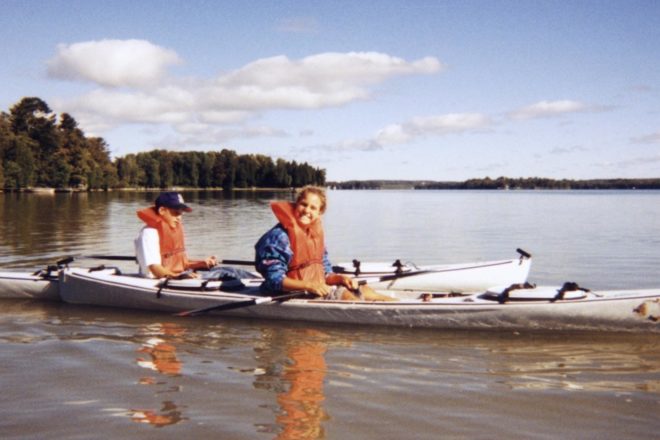 (Left to right) Jacob and Emily Zywicke kayak on Kangaroo Lake during one of their many family trips to Door County. Submitted.

Seated around a table in the lounge of The Rushes Resort, he can pull up memories of this place from two, three decades ago. There was the time he and his son, Jacob, played atop a huge pile of sand that had been delivered but not yet spread on the beach. The time another of his four children went down a steep hill on a cross-country ski trail and fell, prompting laughter. The summer days spent on kayaks out on Kangaroo Lake.

John, his wife Dianne and their family have been coming to Door County for more than 30 years. They own 12 weeks of timeshare at The Rushes, and regular trips here from their home in the Milwaukee area — in both summer and winter — formed a core part of their children’s childhoods.

Today though, John, 73, and Dianne, 70, mostly spend time here alone. Door County trips for the Zywicke children are less frequent. Their kids now range in age from 34 to 41 and in location from Oregon to Virginia. The kids have their own travel interests and want to see new places, not just return to the ones they know. Between their own families, busy work schedules, and the time and expense involved in traveling across the country, reunions of the entire family are harder to make happen.

The Zywickes are not alone. Their story illustrates changing vacation trends that Door County and other vacation destinations have experienced in recent years:  shorter stays, trips planned less far in advance, and more visitors who come once or twice and then try something new, rather than returning every single year.

A generation ago, the average length of stay for a vacationer in Door County was between five nights and a week, said Fred Anderson, owner and manager of The Ashbrooke in Egg Harbor. By the early to mid-2000s, that had declined to about two nights at The Ashbrooke, Anderson said. Since then, it has rebounded to about three nights.

Shorter lengths of stay can result in some increased costs for vacation properties, Anderson said. For instance, hotels might have increased labor costs for housekeepers if guests check in and out more frequently.

Countywide length-of-stay numbers are hard to come by. Representatives of the Door County Visitor Bureau and the Door County Tourism Zone said their organizations do not track that data.

Local and national tourism officials seem to agree that average lengths of stay have declined during the past generation. A 2012 Crain’s Chicago Business article, citing data from the U.S. Travel Association, reported the average length of stay for vacationers nationwide had declined from more than a week in 1975 to 5.4 days in 1985 to 3.8 days in 2010.

That average length of stay nationwide in 2016 was 2.9 nights, according to the U.S. Travel Association, which cited data from the market research firm Kantar TNS.

There are multiple explanations for how we got here.

Since 2000, DeBaun said, “technology has been on the upward swing while vacation has been on decline.”

“Your work is always with you,” DeBaun said. “You can see the work piling up. It’s not as easy to disconnect. You can’t leave your job in the office.”

The rise of cell phones also has coincided with the elimination of cost barriers to long-distance calling, meaning it’s easier to make work-related calls when on vacation, said Jack Moneypenny, president and chief executive officer of the Door County Visitor Bureau.

Moneypenny pointed to a few other factors that he said have caused upheaval in travel patterns. After the terrorist attacks of September 11, 2001, Moneypenny said, he saw people wanting to see their loved ones more often, resulting in more frequent but shorter vacations, as well as trips that were planned less far in advance.

Less than a decade later, the economic recession that started in 2008 caused even people who did not lose their jobs to be more cautious about taking vacation.

“If you were one of the lucky people who kept their jobs, were you going to go into your boss’ office (and take two weeks off)?” Moneypenny asked.

“There is this residual fear in people’s minds about taking ‘too much vacation,’” in that workers are afraid their bosses will find out their companies can function without them, he added.

DeBaun said the travel association’s research has not shown a correlation between economic factors and Americans’ travel patterns. But anecdotally, she said, the economy does seem to affect travel patterns.

“Obviously the recession did play a role,” DeBaun said. “As we get further away from that, the job market improves, and people are feeling more confident in their roles.”

Those factors are compounded by generational differences in how people travel, Moneypenny said.

Despite pressures at work, millennials “have just learned that they are not going to not go on vacation.” Millennials approach vacation differently than older generations, he said.

“My generation (baby boomers) — we’re planners,” Moneypenny said. “And I think the Gen-Xers are still planners. I think millennials are more instinctive travel.” 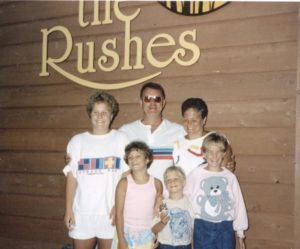 The Zywicke family at The Rushes, where they have been regular visitors for more than 30 years. Submitted.

That has been true for the Zywickes, to some extent. John, who worked as a pharmacist, and Dianne, who was a medical technologist, both had to request time off a year ahead of time.

The Zywickes became interested in returning to the same place year after year in part after they took a trip to Florida and, while staying in a motel, had their credit cards stolen, John said.

“We wanted a known destination,” he said.

For the Zywickes’ daughter Emily, now 37, coming back to Door County on a consistent basis is more difficult now. Emily Zywicke lives in Virginia, and she and her husband are both in the Navy. At each station, they have to reevaluate the likelihood of deployments and how much they’ll be able to take vacation.

“I remember having this conversation with my dad,” she said. “Why would I want to spend a week in (one) place and just recreate? There’s places I want to see.”

That has changed in recent years, Emily said. She and her husband now have a one-year-old child and that has changed her travel plans. She now hopes that their family’s traditional Door County vacation continues at least a week or two each year, although she’s not sure if she’ll make it back in 2017. She’s also interested in traveling west to ski.

Moneypenny said he doesn’t expect all visitors to return to Door County for an annual weeklong vacation anymore.

“That concept of going to the same place every year, the same week — I know it exists out there,” he said. “But I don’t believe that’s the way the majority of Americans are traveling.”

When the visitor bureau markets Door County to potential visitors now, Moneypenny said, it does so with the hope that people will include the peninsula in their rotation of travel destinations — maybe not spending all their vacation time here, but coming back to experience Door County in a different season, for example.

“We want people to try us on for size,” he said.

That approach has worked, Moneypenny said. From 2009 — at the low point of the financial crisis — to 2016, total room revenues in the county increased by 49.9 percent. And with a base of regular visitors established, Moneypenny said, vacation properties can adjust their rates more easily based on supply and demand, leading to higher room rates for last-minute reservations.

When John and Dianne Zywicke make a trip to Door County today, John often brings a flatbed scanner with him and spends his time converting old photos from prints to image files. It’s a nostalgic exercise that creates a lasting digital archive of vacations past. 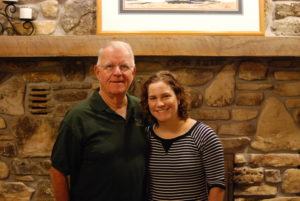 John and Emily Zywicke at The Rushes in September 2016. Photo by Andrew Phillips.

The family is making new memories, too. The Zywickes had all four of their children with them at The Rushes for the 4th of July in 2016, and three of the four were here for Christmas.

While future Door County trips for their extended family are uncertain, the Zywickes are enjoying the times they have here and delighting in their family’s newest generation.

Emily’s son, Lincoln, was here for his six-month and one-year birthdays. He had his first food here, was taught to crawl down stairs here, and during the summer, he played in the sand for the first time here, on the same beach where John and Jacob played years ago.

“They had lots of fun up here as kids,” Dianne said of her own children.

By the Numbers: Changes in Tourism Patterns

Average daily rate for a room in Door County in 2009

Average daily rate for a room in Door County in 2016

Average number of vacation days used by Americans in 2014