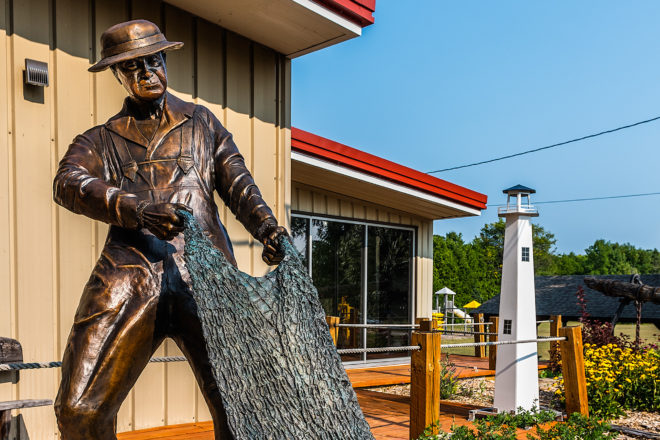 A statue “to Honor the Commercial Fisherman of Northern Door County.” Photo by Len Villano.

Commercial fishing has a long history on the Door Peninsula, and Death’s Door Maritime Museum does its best to honor that history and those traditions (alongside the museum in Sturgeon Bay and Cana Island Lighthouse).

Death’s Door has added yet another item to commemorate Door County’s commercial fishing industry. On July 4, a sculpture was uncovered, created by Mary Ott Davidson. She’s an artist from Mississippi, but has taught at Peninsula School of Art for more than 20 years with her husband.

The sculpture is a bronze casting of a fisherman, complete with boots, overalls and hat, pulling in his net of fish. Bronze casting is by far Davidson’s favorite medium, though she’s proficient in stone carving, pottery, silversmithing and enameling. She’s been working with bronze for more than 50 years.

She was commissioned to do the piece by the museum board, and they guided her research in preparation for planning and building the piece. She comes from a fishing village and has done some of it herself, so she had a leg up in that respect. Most of the research she did was on things like clothing. She worked closely with the board and with Mark Weborg in her research.

Though the sculpture isn’t intended to look like a certain person, it is intended to resemble someone that could be part of the Weborg family, a prominent name in Door County’s fishing industry.

The research was the easy part. Constructing the piece is another story – it requires lots of problem solving, Davidson said. She needed the piece to have motion, or an action, and she had to figure out how to freeze that action. Plus, the piece is life-size, if not larger.

“It’s that kind of intriguing challenge that I really love about working in bronze,” Davidson said.

Without going into detail, the process has many steps, including making a mold, a wax casting and pouring liquid metal into it. There are many different levels of wood and styrofoam and clay and different kinds of molds that need to be constructed, in simplest terms. The net was even harder to make. Davidson had to knit strings of wax over the fish in order to make the net. 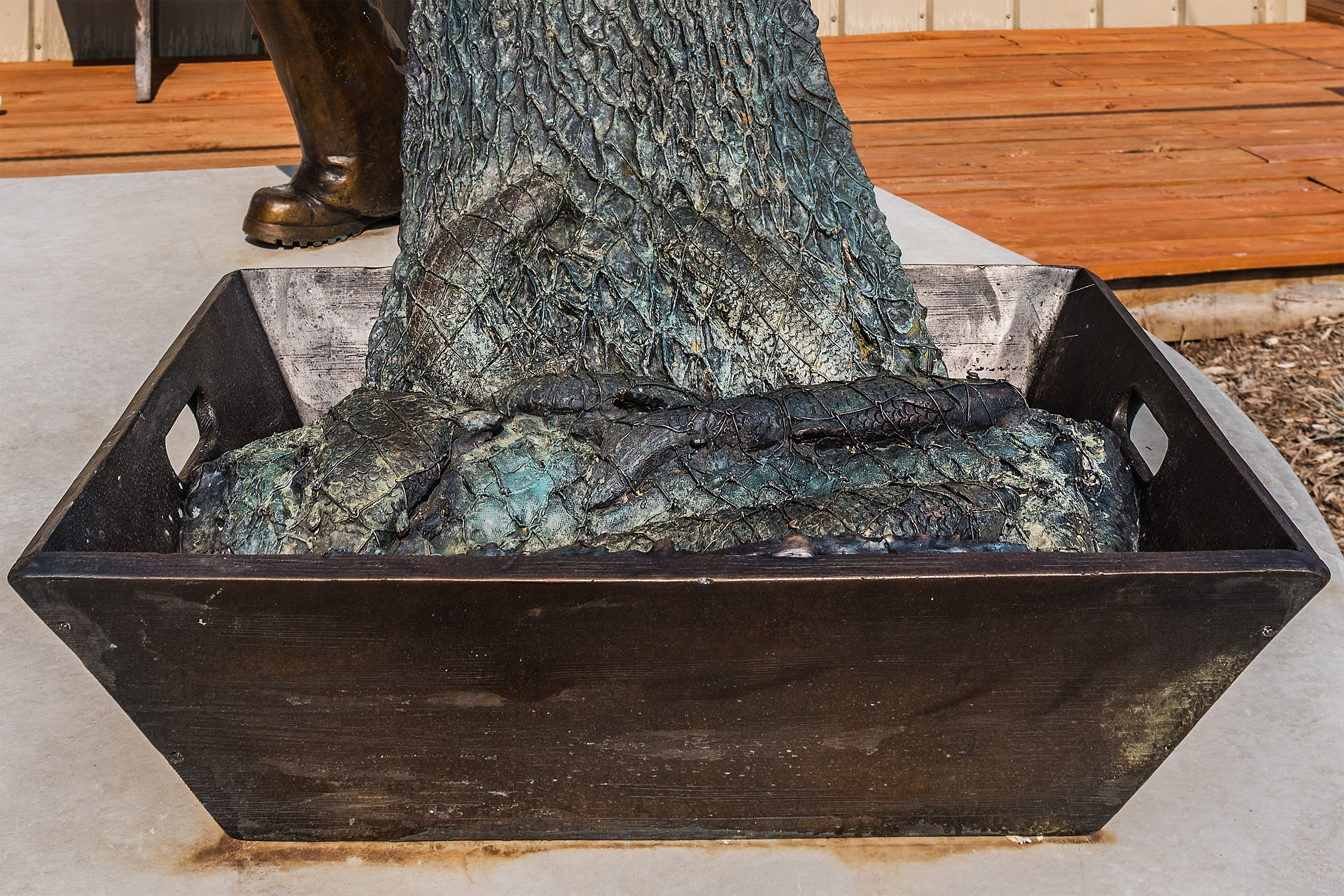 Creating the net was an intricate process. Photo by Len Villano.

Once everything is wax, you cover it with different plasters, let them dry and repeat. This creates yet another mold, and the wax is melted out of it. Then you’re left with an empty structure.

She made parts of the piece at her indoor and outdoor studios in Mississippi. She worked up until the clay pieces were ready to be taken to a foundry near Atlanta since it was so large. The last three stages were completed there. They then brought up the finished project to Wisconsin after two years of planning and construction.

The unveiling ceremony was more than just a way for Davidson to show off something she had created. It was “an incredible privilege” to make something to commemorate her time teaching in Door County and all the friends she’s made and the community she was a part of. Plus, it’s her first bronze in Wisconsin.

“I’m just absolutely thrilled,” Davidson said. “From my husband and I, it’s a wonderful thank you to the people of Door County.”

Davidson and her husband are no longer teaching up here, but they have been teaching via Skype for a studio in Algoma, ran by Bren and Randy Sibilsky. She’s also busy working on silversmithing and enameling for a shop back home. She hopes to return to Door County soon, and still stays connected with students and friends.

“It was really special,” Davidson said. “Much to be proud of.”