The sun-lined face of Antonia Tomjanovich is watching over Highway 42 once again. This time though, Grandma Tommy is not behind the counter of her produce stand, selling the fruits of her family’s labor, but emblazoned on the side of a brand new farm market designed by her grandson. 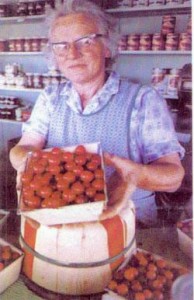 Grandma Tommy in the original market.

Steve and Kate Laubenstein and their three children are working feverishly with construction crews and a small staff to ready the new Grandma Tommy’s farm market for a grand opening Memorial Day Weekend. The building was designed by Steve to include design elements of old schoolhouses and barns.

“We built a big porch around two sides of the building, with the idea that people could sit in rocking chairs on the porch, and enjoy a piece of pie,” Laubenstein said. “I tried to make the building as inviting as possible.”

Construction on Grandma Tommy’s began in mid-February. The Laubenstein’s have been researching and making plans for the market since 2005. Their hard work will be showcased by the number of items lining the shelves from a multitude of local producers and vendors.

“Everyone we talk to gives us a little hint on more people to talk to” about local products, Kate said. “The farmers and product producers would rather sell their products in town, than have to drive to Green Bay.”

Trial and error during the winter allowed Kate to perfect her cherry pie recipe, although the market will offer quite a bit more than a piece of pie. The market boasts a kettle that can make 36 pounds of fudge at a time. Seasonal produce from Door County farmers will be available for sale, next to fresh meat from Marchant’s, cheese from Renard’s, canned goods from Weinke’s, wine from local vintners, Baumeister root beer, Door County coffee, Door County ice cream, flavored olive oils, microbrewed and Wisconsin beers, as well as ample conversation about Tomjanovich farming and produce stand history.

Grandma Tommy had a crew of free, hardworking labor with Steve Laubenstein and his eight siblings. According to Steve, no child escaped Grandma Tommy’s work wagon. As stern as she was with her grandchildren, Steve said he learned the value of hard work and is putting those lessons to use as his family works to ready the farm market to open for business.

Grandma Tommy started the farm stand in the 1940s. She and husband John moved to Door County from the Upper Peninsula of Michigan after immigrating from Croatia to Canada. Grandma Tommy shuttered the windows of the farm stand in the late 1960s, Laubenstein said, and she died at age 95. Steve’s other grandmother brought fresh fryer chickens to the stand to sell alongside the produce. Pictures of the family history will be displayed in Grandma Tommy’s, along with remembrances from the Laubenstein family of growing up and working in the fields and orchards for Grandma Tommy. 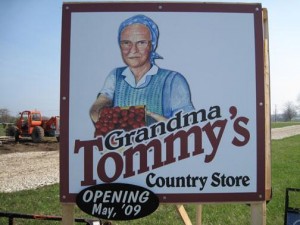 The Grandma Tommy’s sign at the new market just north of Sturgeon Bay.

To make access easier for Grandma Tommy’s visitors, the Laubenstein’s are working with the town of Sevastopol and the Department of Transportation (DOT) to add acceleration and deceleration lanes (extended shoulders) along both sides of the highway. This will allow drivers to pull out of the main traffic lane to access the store.

At the annual town meeting, town Chairman Leo Zipperer said the town was working with the Laubenstein’s and the DOT to improve the highway and Forest Road, which intersects at an odd angle with the highway. The town is in the process of researching grant opportunities to pay for the improvements.

“If we want industry and business to come to our town, we had best encourage them,” Zipperer said. “If these road improvements were for a sole business, I would say let’s wait to make the improvements. But the town board is of the opinion that there will be at least three businesses in this area in the near future.”

Supervisor Tom Girman agreed with Zipperer on encouraging business to build in Sevastopol.

“I think it’s time we have a business corridor,” Girman said. “It may cost us more at the outset, but the more business we encourage will help our tax revenue.

As for opening a new farm market in a shaky economy, the Laubenstein’s are optimistic and ready to keep their noses to the grindstone.

“We want to provide goods and service to local people year round, and create a destination for visitors,” Kate said. “People don’t feel guilty about buying things they can use. We want to encourage people to stop by for a slice of pie and a scoop of ice cream, sit in the rockers on the front porch and watch the world go by.”