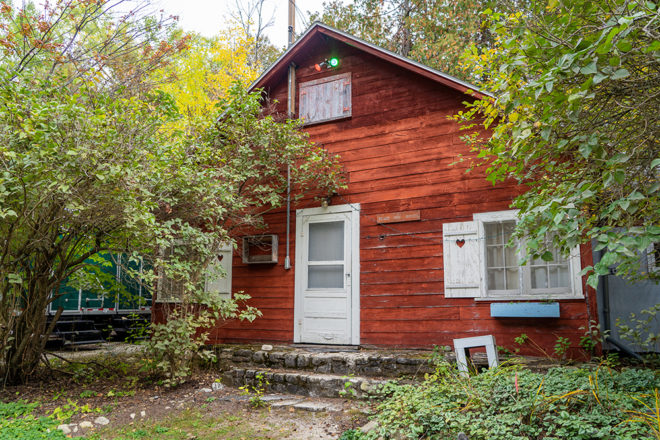 Used as a dorm since 1937, this building was converted from a one-room schoolhouse after being dragged across the ice from Marinette, Wisconsin. Photo by Rachel Lukas.

The Peninsula Players Theatre company in Fish Creek is 87 years old – and looking at the state of its dorms, its age is obvious.

But improved housing is now within reach. Peninsula Players’ capital campaign – called Act II: Protecting the Past, Ensuring the Future – aims to construct two new dorm buildings with modern amenities by May 2023. The buildings will house 32 people at the southeast end of the property, next to the theater’s upper parking lot.

According to executive director Brian Kelsey, the dorms are much needed and long anticipated.

“This is so critical to the organization so that we can simply function,” he said.

Once finished, the new dorms will be a part of the patchwork of buildings, all from different eras, that runs throughout the Peninsula Players property.

According to the theater company’s business manager and unofficial historian, Audra Baakari Boyle, buildings currently used as dorms were built between the 1920s and the early 2000s.

Peeling paint, wobbly floorboards and pockmarked walls are easy to observe within the dorms that house about 70 actors and staff members throughout the season. There is no running water, no air conditioning and no central heating, so all the dorms are winterized after the last curtain call in the fall.

Pedal to the Metal for $4.2 Million Project

So far, Peninsula Players Theatre has raised $2.9 million in donations and grants. Though the original cost estimate for the construction project was $3.5 million, inflation and supply-chain issues have increased the estimate to $4.2 million, according to Kelsey.

Peninsula Players’ capital campaign began “quietly” in 2019, said Kelsey, who at that point started making potential donors aware of the upcoming project. Prior to that, during the early 2000s, all of Peninsula Players’ efforts were focused on tearing down the old theater and building a new one. But when this new theater was paid off, management’s efforts shifted to planning for new housing.

The pandemic redirected that shift in 2020, forcing management to focus on survival rather than expansion. The housing project became the number-one priority again once the pandemic improved.

“It was the beginning of this year that we put the pedal to the metal,” Kelsey said.

After breaking ground Sept. 8, the construction crew cleared the lot and is currently building a retaining wall. Work on the foundation will begin around the middle of October.

Although the current dorms are in poor condition – workers are even warned about the housing situation before they arrive at the theater – they also hold decades of happy memories, according to Kelsey. He recalled interns who met in the dorms and later got married, and other staff members who had their ashes spread in the garden next to the theater.

“People love this place, and they came back because they love this place,” Kelsey said. The state of the dorms hasn’t deterred anyone from working with Peninsula Players, but improving the housing could help to attract and retain staff, he said.

It could also help Peninsula Players to better fulfill its original mission to provide an oasis for artists.

“What was so important to Caroline and Richard Fisher when they founded this place was to have an artistic community” – and they built that community by housing staff on-site, Kelsey said.

Classified as a summer stock theater – one that runs performances during the summer and reuses stock set pieces – Peninsula Players must follow rules set down by its contract with the Council of Resident Stock Theatres. One of those rules is that it must provide housing for its staff.

There are seven other theaters across the country on the same contract, but Peninsula Players is one of the few that provides the housing on-site, likely because many other theaters lack the necessary infrastructure, according to Kelsey.

“The concept of what we have here is not common,” he said. Peninsula Players is the only theater in Wisconsin that houses staff in a campus-like setting.

To stay on the contract, Peninsula Players must build a resident company – a group of people doing more than one show – by its third show each season, which is another reason to build new dorms to retain staff, Kelsey said.

Peninsula Players Is in His Blood

Born and raised in Door County, Kelsey had his first experience with live theater at Peninsula Players. His grandparents always stressed the importance of the arts, and now their foundation – the Patrick and Beatrice Haggerty Foundation – is the capital campaign’s lead donor.

“They believed in this place and knew how important it was to Door County in a greater sense,” Kelsey said.

The same is true, he said, for many others working on the project.

“We’ve had great leaders, great board members, great company members who have all approached this as stewardship more than anything,” Kelsey said. “We are nothing but stewards of this organization.”

To make a donation to the capital campaign, visit peninsulaplayers.com/act-ii-housing-campaign.