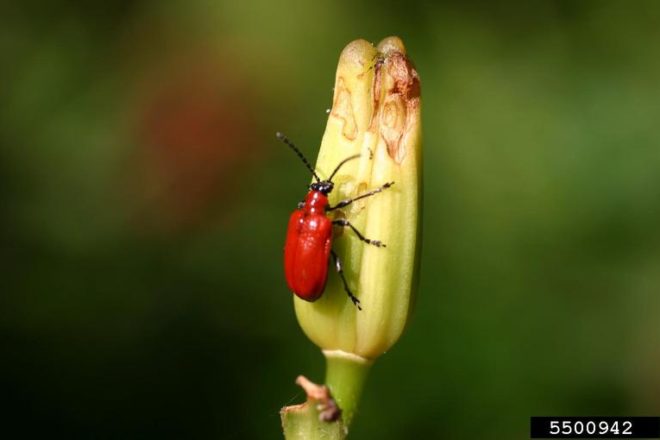 Invasive species are plants, animals or pathogens that have been moved from their native environment into a different area. As people and products move around the world, even the most careful searching doesn’t always find the tiniest eggs or seeds that may accidentally hitchhike in.

Once in the new environment – where natural predators are not present – often the population of these new invasive species explodes until we can eradicate it (the ideal situation), learn how to manage it, or wait for something to start eating it, which brings the population into check. Unfortunately, in recent years, it seems as though the news has been full of the environmental and economic impacts of dealing with new invasive species.

The lily leaf beetle (Lilioceris lilii) is one more species to add to the list. Native to Europe and Eurasia, it was first found on the East Coast of the U.S. in 1992. By 2014, it had arrived in Wisconsin’s Marathon County. Since then, it has been found in eight counties surrounding Marathon County, plus Dane and Door counties. The first official Door County report of the invasive lily leaf beetle came from Northern Door on July 30.

As the name indicates, the lily leaf beetle feeds on lilies. Although it may occasionally be found on other plants, it primarily requires plants in the lily family – including true lilies (genus Lilium) or fritillaries (genus Fritillaria) – to reproduce. Asiatic lily hybrids are the most susceptible to damage, but Oriental lilies, Easter lilies, Turk’s cap, tiger lilies and native wood lilies all sustain damage as well. It also feeds on Solomon’s seal and flowering tobacco. Canna lilies, calla lilies and daylilies are not true lilies, so they are not a host for the lily leaf beetle. There are also some resistant varieties of Oriental lilies.

The adult lily leaf beetle is one-quarter inch to one-half inch long, bright red, with a black head, underside, legs and antennae. There are no markings on it. Adults overwinter and emerge as temperatures warm in the spring. The females begin to lay eggs on host-plant leaves and can lay up to 450 during a season. The hatched larvae are greenish to orange, sluglike blobs with a dark head capsule. To protect themselves from predators, they cover themselves with their own black excrement. They feed on plant leaves, stems, flower buds and flowers for two to three weeks, then pupate (transform) into the red adult beetles in the soil. Those adults continue to feed until they seek overwintering sites in the late summer and early fall.

What can you do?

At the beginning of an outbreak, determine how wide-spread they are. When populations are small (which they should be at this point), the goal is eradication. This requires scouting plants frequently and squishing any adults, eggs or larvae that are present, or using an insecticide labeled for those plants.

It’s also extremely important to avoid moving the beetles around the county or introducing more into the county: Don’t move plants from one part of the county to another, or especially from a different part of the state to Door County. Even when you’re positive that your plant doesn’t have lily leaf beetle, you could be spreading many other invasive species by transplanting plants around the state, so that’s never recommended. When buying plants from a nursery, carefully inspect all of their leaves to make sure there aren’t any eggs or larvae present.

If you have lilies or fritillaries around your yard, check their leaves and flowers. If the plant looks chewed up, carefully examine it for the scarlet-red adult beetles. The larvae tend to cause more damage but are likely done feeding by now. That means you may see eaten lilies but can’t find an insect culprit. In this case, start checking your lilies early next spring for the red beetles and then the black, bloblike larvae mid-summer.

You can help me understand where the lily leaf beetle is present in the county by sending a (not blurry!) photo to [email protected] and including the location where you found them. If you had significant leaf-feeding on your true lilies or fritillaries this year, I’m interested in knowing that as well.

Thanks in advance for your help! By being proactive, we can stop this invasion while it’s just starting and squish it in its tracks.