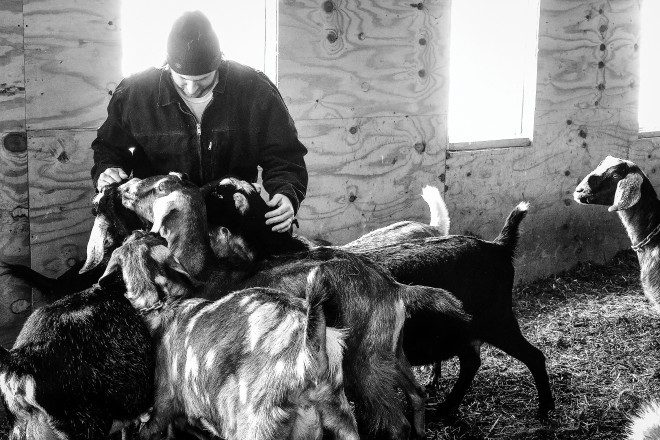 T hree generations of goats greet Jesse Johnson with bawling entreaties for brunch as he arrives at the barn for the first of two daily feedings.

“It’s second-cutting hay, which is usually the best cut of hay. It has alfalfa in it,” Johnson said as he spread two bales of the still-green hay in the feeding trough. “This hay really creates some great milk. And they love it.”

The entreaties cease and all you hear is the goats munching and an occasional sound of apparent satisfaction as a goat nuzzles its snout deep into the hay. 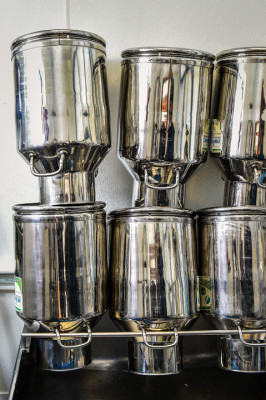 “They love to eat,” Johnson said.

And that’s what it’s all about for Johnson. Happy, well-fed goats produce great milk, which makes great cheese.

“Your cheese is only as good as your milk. You can’t make it any better than what you have to start with. That’s the key,” he said.

Johnson makes cheese just down the road from his farm on County ZZ, in downtown Sister Bay at the Door County Creamery, which he and his wife Rachel opened last year as a seasonal storefront deli where you can buy Johnson’s various goat cheeses, gelato, sandwiches, and Rachel’s fragrant, soft-on-the-skin goat milk soaps.

It’s a small footprint operation that the Johnsons built from 10 kids.

“We got the original 10 as babies,” Johnson said. “We raised them for a year before we bred them.”

Goats, he explains, have one kid the first year. After that they can have anywhere from two to four kids at one time, although his girls have not yet produced quads. 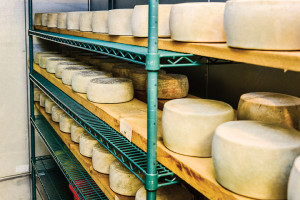 “We get to know them pretty well,” Johnson said. “Every one we know by name for sure, but with that last batch, it’s, ‘Wait, who are you again?’”

He realized as the herd grows, he’d have to ID the goats with neck chains.

“It’s mostly knowing which one comes from which mother for breeding. So if I have a good milker, I want to know which daughters they are,” Johnson said. “You’re picking certain genes, trying to accentuate the good ones. But you have to be careful too, with all the good traits you also get the bad traits of the animal. If one’s a little frisky, or likes to escape or likes to get in trouble, sometimes that can be accentuated in their offspring as well. You can have the best milker in the world and have one come out with a faulty udder. But you have a better chance, at least, when you know your stock.”

Johnson’s “day job” remains serving as chef at Sister Bay’s Waterfront Restaurant. How does one transition from the purely culinary world to become a goat farmer/cheesemaker? 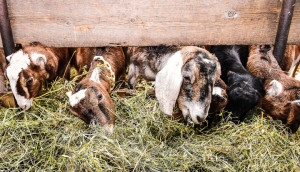 “To learn you have to go and slave yourself out for a while,” he said. “I was down at Dreamfarm in Cross Plains. She’s [owner Diana Murphy] a small goat dairy like this. At the time she was milking 30. I made some cheese with her, and then I did my cheese apprenticing at Babcock Hall in Madison, under [master cheesemaker] Gary Grossen, who is an old school Green County cheddar guy. His dad is a cheesemaker. His grandpa is a cheesemaker. A little different style, Wisconsin commodity cheeses, cheddars and Swiss and brick and Gouda and stuff like that. I’m a little more in the European-style cheese. I do make some goat cheddars. Right now I’m doing my own, called Falltum, which is a natural raw milk, cave-aged cheese (made with milk his goats produced in the fall). And fresh chèvre. When you have access to milk like this, the fresh cheese, you can’t beat it.”

One of his best sellers last year was a ramp chèvre. “I’ll go out in the spring, forage ramps for a month, as long as they’re there, clean them, dehydrate them and add dehydrated ramps in the chèvre,” Johnson said. 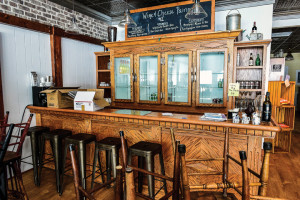 Ultimately, cheesemaking is not that far removed from the culinary process Johnson knows as a chef. What about the farming aspect?

“A lot of reading. A lot of research. A lot of trial and error. And a lot of common sense in taking care of an animal,” Johnson said. “Mostly reading and doing it. Becoming your own vet, all of that. I really enjoy doing that part of it, too. So far, knock on wood, we’ve never lost any animals. Last year a couple at birth, but that was because one of the goats had it six weeks early. The last six weeks is about 30 to 40 percent of baby growing [in a five-month gestation period], so they were really premature.”

While Johnson enjoys the animal husbandry part of goat farming, it conflicts at times with his appreciation for goats as sentient beings. 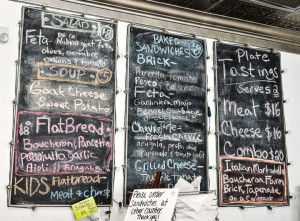 “The animals themselves really got me interested,” he said. “Sometimes they’re so humanlike. They look at you sometimes and you look at them and think, ‘Are you really looking at me?’ It’s not like a cow just staring into space. There is some intelligence there. I don’t know if that’s a good thing or not. It’s hard being on the farming side of it and you have to make decisions about livestock. You don’t treat them as pets because you know you have to get rid of them sometimes. It’s tough. Everyone’s got their own personality. You’ve got the queen of the barn. There’s a hierarchy.”