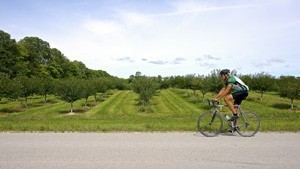 A rider in the well-established Door County Century ride, held six days before the new Peninsula Century that takes place out of Sister Bay on Sept. 14.

You might wonder why anyone would decide to hold a century ride in Door County six days after the Door County Century Ride celebrated its 35th successful event with several thousand cyclists and friends and family.

Well, those riders are the reason, and many more who might come to Door County during an otherwise slack post-Labor Day/pre-fall fests week…if the week of the two century rides was known for all time as Bike Week, with a week of everything bicycle – the two big rides bookending everything, smaller rides, forums, workshops, bike and gear expos, education and, perhaps most importantly, partaking of all that Door County has to offer, on the bike and off.

“It’s a good business stimulant,” said Paige Funkhouser, coordinator of the Sister Bay Advancement Association (SBAA), in explaining why the organization got so enthusiastically behind this first-time event.

The SBAA is one of the sponsors of the event. Sister Bay has not had an athletic event since the fall run, associated with Sister Bay’s Fall Fest in October, ended nearly a decade ago.

“Sister Bay Advancement Association has been working with the Peninsula Pacers on the logistics, working as liaison with the village, helping them navigate through government with different permits. We are helping day of with volunteers,” Funkhouser said.

She adds that she and Peninsula Century organizer Brian Fitzgerald have informally discussed the many possibilities that could develop with a full-fledged Bike Week in Door County, sandwiched between the two century rides.

“Already this year there’s an organized group ride,” she said, referring to an event that took place on Sept. 12. “Just organically things are happening. As an event organizer, that’s the best way for things to happen.”

Fitzgerald said he is expecting anywhere between 250 and 400 riders, “Which we feel is pretty good for a first-time event,” he added.

Fitzgerald said he would like to work with Sean Ryan, organizer of the earlier Door County Century ride, and organizations such as the Bicycle Federation of Wisconsin to put together a week of rides, forums, workshops and educational seminars focused on bicycles and bicycling in Door County.

“This is really a quiet time, a lull between seasons,” he said. “It’s an ideal time with the weather, historically. There aren’t as many cars on the road. There are vacancies in the hotels and restaurants. I don’t think it’s going to be hard to have businesses all over the county embrace this and come up with their own ideas.”

Fitzgerald also mentioned that the new Door County Creamery is involved, and that the Sister Bay Piggly Wiggly signed on to be one of the sponsors of the vent.

“Jay [Kita], the manager of Piggly Wiggly, is going to be helping out because they wanted to be a part of this,” Fitzgerald said. “That’s what I’m excited about, all the support from the community. The businesses realize the visibility and what it does for Door County. It’s pretty exciting to have that support from all the businesses, restaurants and hotels. They understand this is something that won’t happen overnight, but by being a part of it, they are helping to get if off the ground.”

With Sister Bay being the home base for this ride through Northern Door, it seemed only natural to make the Go Bo Foundation the official charity of the Peninsula Century, honoring the 13-year-old Sister Bay native Bo Johnson, who, knowing he was dying of leukemia, chose to do so in his beloved Sister Bay rather than at the Children’s Hospital in Milwaukee where he had spent so much time.

“This could be a great way to raise money for that foundation,” Fitzgerald said.

“After it’s all said and done, we’re going to have a pretty good end product, a Door County event.”