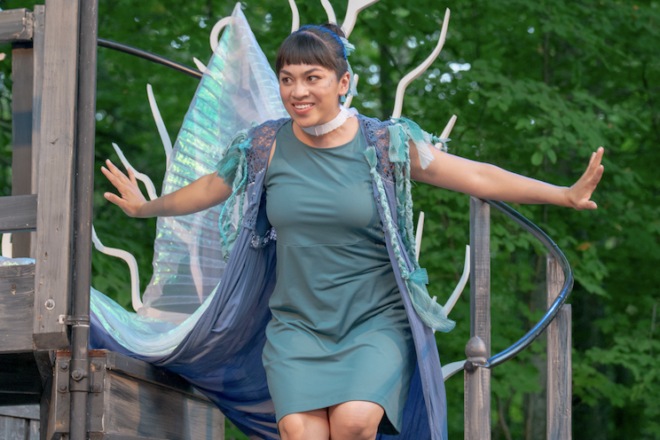 When I first read The Tempest in high school, I hated it. Though my English teacher insisted it was a masterpiece, I found it dull and confusing, and it had far too many “thous” to hold my attention.

But during Door Shakespeare’s performance, I had a revelation. I realized that reading the play had bored me because it was never intended to be read. Instead, it was meant to be lived, breathed, shouted, cried and laughed – and that’s exactly what the 13-member Door Shakespeare cast did.

The Tempest tells the story of Prospero, a former duke of Milan who magically conjures a storm to shipwreck and torment her brother, Antonio, and his shipmates. Earlier, Antonio had deposed Prospero during a coup, leaving her and her daughter exiled on a deserted island. (If you noticed the pronoun switch for Prospero, that’s because Door Shakespeare’s version of the character is played by a woman, as are a few other characters who were originally written as men.)

Wearing simple costumes fashioned from modern clothing and inhabiting a well-worn, wooden stage built around a tree, the performers’ powerful acting required little onstage ornamentation. Aside from some blue bubbles hanging from the tree and a few more surrounding white coral on the stage, the set was minimalistic, with no scene changes and no curtain to be drawn at the finale.

The play’s lighting and sound were similarly simple. An occasional lighting strike flashed across the stage, and sound effects such as thunderclaps were created manually behind the scenes. Musical accompaniment came in the form of otherworldly vocals, backed by a drum and a nyckelharpa (a traditional Swedish instrument that sounds like a violin).

There were no microphones, which worried me at first. As someone who “can’t hear” the TV without also reading the captions, I doubted I would be able to understand Shakespearean dialogue delivered without the help of a sound system.

But I underestimated the power of projection. The actors’ inflection didn’t make them sound as though they were yelling, yet their voices still filled the tiered semicircle of chairs that surrounded the stage.

And through the performers’ expressive delivery, I understood the dialogue and plot better than when I had read it on a page. All the “thees” and “thous” stopped tripping me up because they flowed so naturally off the actors’ tongues, and I stopped mixing up characters whose names all sounded the same on a page. Working with the bare-bones set, the performers had to lean heavily on their acting chops – a challenge they met with ease.

Startling to me was the fact that about 30 minutes into the play, I was starting to enjoy Shakespeare for the first time. Even more startling was the realization that Shakespeare is actually funny.

In high school, I was told that he blended comedy and tragedy, but reading this on a page in preparation for an exam, the comedy didn’t seem all that funny, and the tragedy didn’t seem all that sad. Seeing it live, though, I noticed the clever wordplay blended with moments of campy, over-the-top humor, and contrasted with moments of startling poignancy.

By the end of the play, it was obvious that the performers understood that Shakespeare is meant to be experienced, and not merely read. To this end, they took the play back to its basics, with no fancy costumes and no high-tech sound systems – just talented actors making a classic story feel real and relevant.

To my high school English teacher, if you’re reading this: You won. You were right about Shakespeare. And to anyone else who hates the Bard as much as I once did, maybe you’ve never seen his work performed by Door Shakespeare.