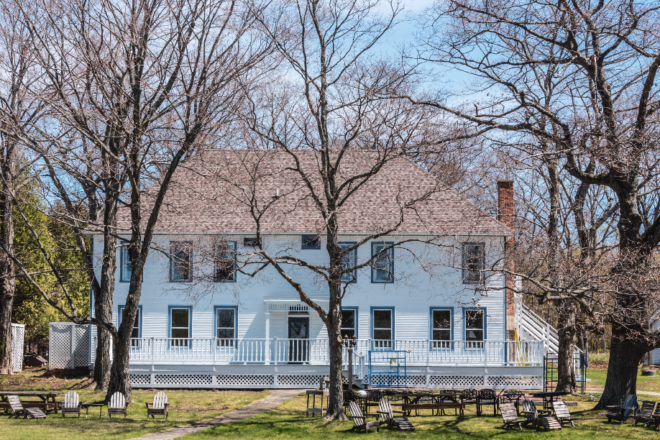 Jeannie Kokes has revived the Hotel Washington, one of the island’s oldest establishments, with the aim of creating a healing retreat. Photo by Len Villano.

On an early September morning, Kelly Warren of Madison was lounging in the lobby of the Hotel Washington, rejuvenated after bicycling 50 miles in the Door County Century ride the day before.

“It’s beautifully quiet,” she said of the bed and breakfast. “I feel very tended to, but it’s subtle, pleasant. In a B&B you’re never sure what it’s going to be like. I didn’t want to feel like an in-house guest, and I don’t.”

Her comments are music to the ears of owner Jeannie Kokes, who has embarked on an uncommon course in managing one of the island’s oldest establishments.

As a psychologist in the Chicago suburb of Naperville, Illinois, Kokes had her dreams set on a retirement not unlike those many others aim for. She and her husband planned to split their golden years between Sante Fe, New Mexico, and Washington Island. But her husband died unexpectedly in 2004, upending her plans.

“I was stymied,” she said. “But after some time, I realized that now I was only living for myself.”

Kokes searched for what that realization meant, eventually landing back at the island she had loved since her parents first brought her across Death’s Door as a child, to a land of dirt roads and simple pleasures.

“I remember hearing the grass hit the bottom of my father’s car on the way to Gibson’s,” she said.

Her family would spend a couple weeks at Gibson’s every summer, a tradition Kokes continued her entire life. Then the Hotel Washington closed in 2010, and sat dormant for four years. She feared the Washington — the place her grandparents stayed in their first visit to the island decades earlier — would fall into disrepair and be torn down. That fear sparked a new purpose in the mind of the restless and relentlessly positive Kokes. She purchased the hotel on Sept. 11, 2014, the anniversary of her husband’s death, with not so much a business plan as a vision. She wanted to create a place of rejuvenation for guests and the island community.

She once hoped to support the community by donating money to island organizations, but now she is doing it more directly. She employs about a dozen people in peak season, including two gardeners at the nonprofit farm she helped start, Gathering Ground gardens, that supplies the hotel’s restaurant with produce. The establishment is now open year round, and includes a yoga studio that regularly hosts public classes and retreats of up to 30 students.

Kokes is well on her way to creating the healing retreat she envisions. If the step onto Washington Island is the deep breath, arriving at the Hotel Washington is the long exhale.

The bed and breakfast overlooking Detroit Harbor features eight rooms nestled among towering oak and maple trees, set back across a sprawling lawn that gives the hotel a grand feel, a sense of walking into another era.

The hotel décor is best described as eclectic, with a lobby and dining room decorated with odes to the island intertwined with touches chosen simply because they inspired Kokes. There’s the three-frame painting of the view from Mountain Tower in the center of the island, a large old plat map, and a small painting depicting the view from the ferry that any regular traverser of the passage will recognize.

But there’s also a wall of Asian-inspired art from the Linden Gallery in Ellison Bay, and parlor tables fashioned from walnut trees taken out by the flooding of the Mississippi River in 2008. 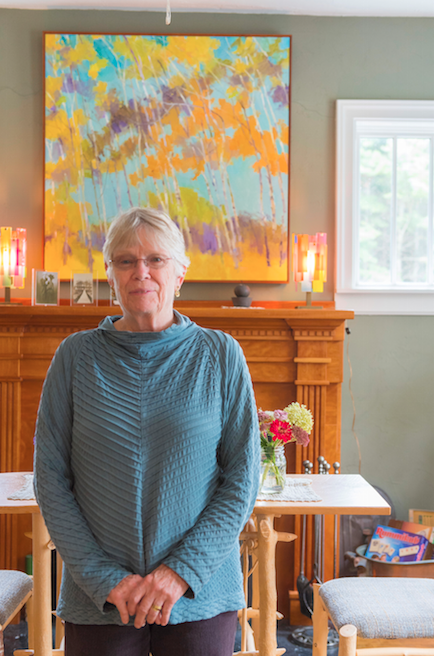 Jeannie Kokes bought the Hotel Washington after decades of knowing the island only as a visitor. Photo by Len Villano.

“The common thread is beauty,” Kokes said. “I want people to feel rest, to feel calm. This is an experience of slowing down.”

Inside the rooms one can’t help but notice the beds, each built out of spalted maple, a form of coloration caused by fungi. The beds were fashioned from timber claimed from the old Washington Island Timber Cooperative by Al Sinclair of Algoma, modeled after the bed made by previous owner Brian Vandewalle.

The hotel and two cottages have a long island history. They were built by Louis Gunnlaugsson in 1906 for Ben Johnson, an Icelander who came to the island with his family in 1887, when he was 12. It became a mainstay and hosted prominent weddings and gatherings, while Johnson earned a reputation as a fine cook, and was known to walk miles every morning to pick up milk and eggs for his guests’ breakfasts.

Johnson’s commitment to local produce was born of necessity, but today owner Kokes carries on the legacy out of a passion for the island, its history, and what she hopes she can help it become. Like nearly everyone who gets into business in Door County, Kokes has been surprised by the challenges she faces each day.

“I’ve learned a lot about what it really takes to keep this island robust, to keep it vibrant,” Kokes said. “I never knew how much work it takes. But I’m the kind of person who jumps in first, then asks what I got myself into.”

In the process, she has gotten to know the place she loves more than any other, better than ever.

“I’ve come here for 70 years, but I’m not an islander,” she said. “Because of this place, I now know islanders in a way I never would have known them before.”

Jeannie Kokes bought the Hotel Washington after decades of knowing the island only as a visitor. Photo by Len Villano.

Jeannie Kokes has revived the Hotel Washington, one of the island's oldest establishments, with the aim of creating a healing retreat. Photo by Len Villano.