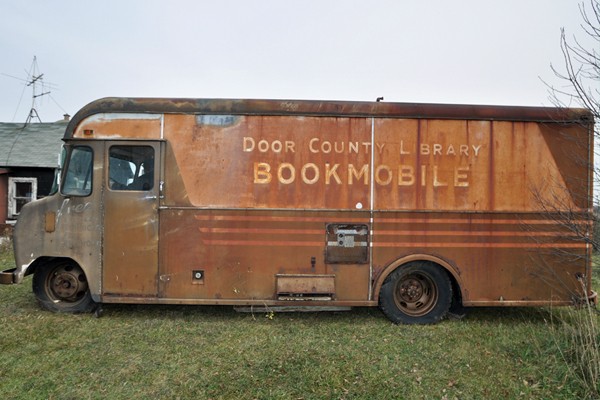 The Door County bookmobile, that kept generations of children and adults connected to worlds beyond their own for nearly half of the last century, is experiencing a third lifesaving rescue.

It came to the county in 1950 as part of a three-year demo project funded by the state that also included Kewaunee County. When the state money expired in 1953, there was, strangely, strong resistance to continuing the service. In the era of McCarthyism, some were as concerned about what people might be reading as they were about the cost of operating the bookmobiles. One rural board member was famously quoted as saying he did fine without ever reading anything but textbooks, and his kids could do the same.

The bookmobile died in Kewaunee County, but was kept alive in Door County. For years, it continued to make the rounds of country, town and parochial schools – even boarding the C. G. Richter for trips to Washington Island. (“Try double-clutching that as you crawled up an incline onto the boat,” one old-timer opined.) In the summer, there were many other stops on its route such as C & W Auto Parts, Nipport’s Store, assorted crossroads, migrant camps and Weborg Point for campers in Peninsula State Park.

The bookmobile came to an undignified end in 1990 when it died near Little Sturgeon, already having been mostly superseded by a “book van” that served only adults until it, too, ended its rounds in 1996. John Enigl, a local historian and writer, heard of the bookmobile’s demise, called the county chairman to double what anyone else might offer to buy it, and had it towed to his home in Egg Harbor.

Lifesaving action number two. On his recent 90th birthday, Enigl recalled that the vehicle had been patched together for years, with wooden pegs substituting for pistons when first one, then two, then three of them gave up the ghost.

At Enigl’s home, the bookmobile served as a storage place for his thousands of books. Wanting it to again serve the community, last November he sold it to the Egg Harbor Historical Society, along with all the books and the collection of audio histories he’s taped through the years of dozens of elderly residents.

The bookmobile now rests at Carlsville Engineering, awaiting its third renaissance at the hands of Joe Krauel. For starters, it needs a new engine, transmission and gas tank, but it’s licensed for five years, and historical society members have big plans for it to again tour the county as a “historymobile,” sharing communities’ stories, collecting more oral histories and helping to keep history alive. Longtime teacher Gaylord “Giz” Herbst has contributed by researching and writing a detailed history of the Door County bookmobile’s long service.

To help or donate to the restoration effort, email [email protected].