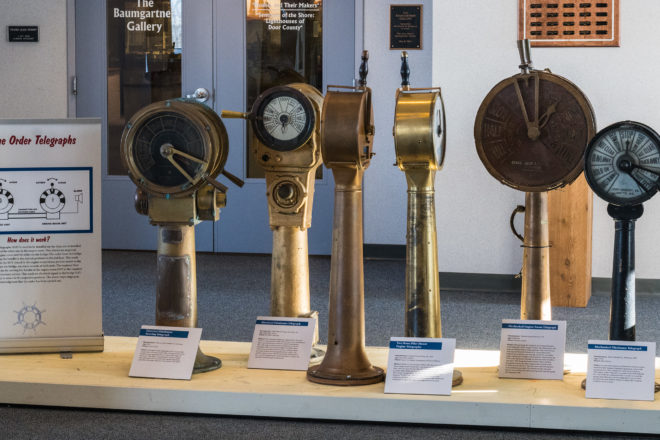 A collection of old telegraphs from the Door County Maritime Museum highlights their newest exhibit, “Telegraphs of the Past,” on display through November. Photo by Len Villano.

The Door County Maritime Museum in Sturgeon Bay explores the history and evolution of intra-ship communication with its newest temporary exhibit, “Telegraphs of the Past.”

Spanning a four-stage presentation in the museum’s upper lobby, “Telegraphs of the Past” is a history lesson on the different ways sailors communicated onboard sea-going vessels and the devices that made that communication possible. As museum curator Adam Gronke explained, the two main components of a ship’s movement – navigation and propulsion – are controlled in two separate areas of the ship.

This was first achieved through use of a voice pipe – two cones connected by an air pipe that wove through a ship’s walls and corridors. One cone was shaped to fit a speaker’s mouth and the other was shaped to amplify the speaker’s voice. 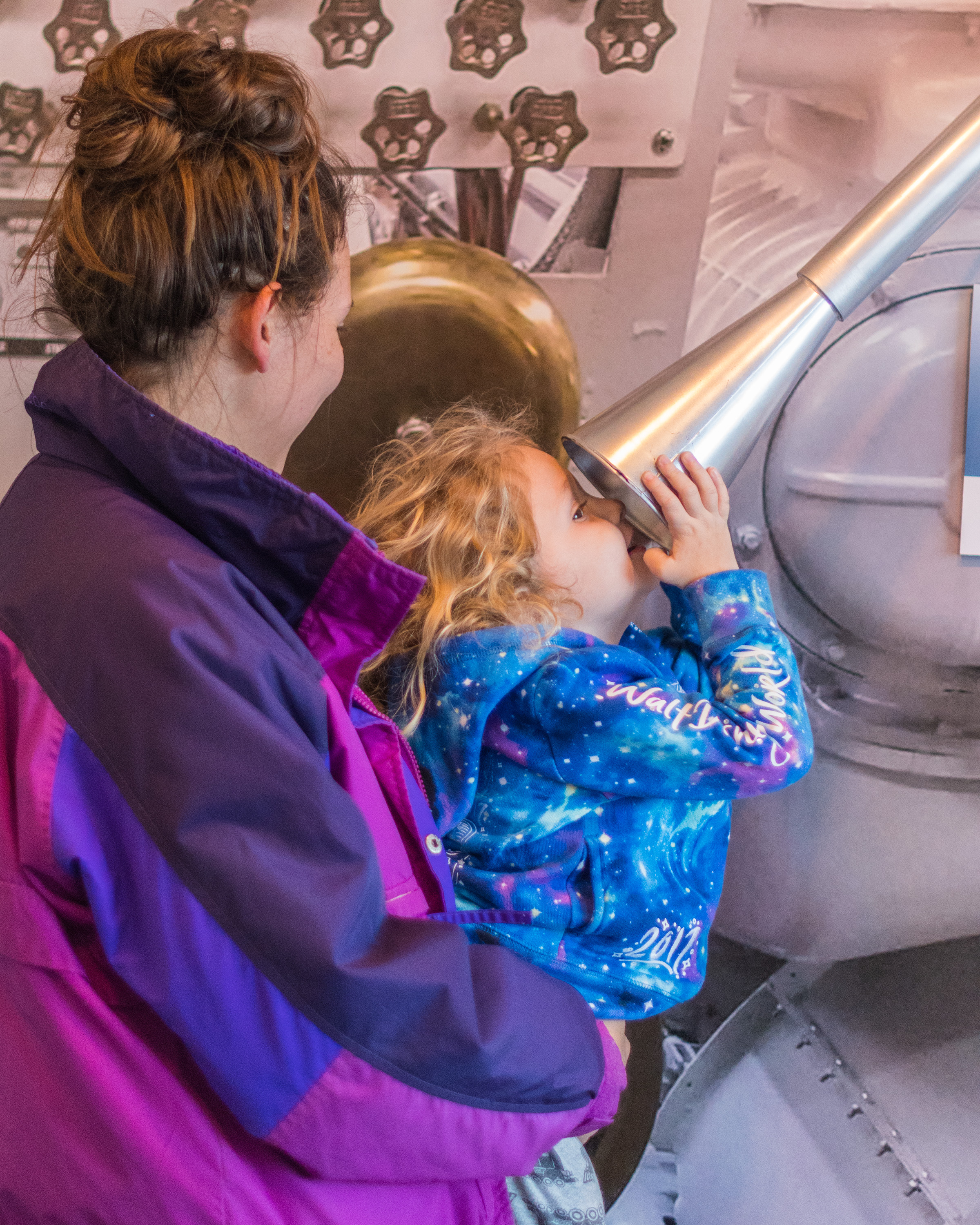 While voice pipes were celebrated for their ease of use and ability to work even when damaged, outside noise interference by people and machinery quickly led to their replacement by sound-powered telephones.

“These telephones operate on no electricity at all so even if you were in a battle and something happened that your electricity went out, you can still rely on these because they’re self-powered,” Gronke explained. “It’s powered kind of like when you’re a kid and you have the cups and the string…but what this does is it actually does have some components that power that voice to go through a longer line of communication.”

The key component is a microphone transducer. This transducer converts sound pressure from a user’s voice into a small electrical current that is converted back to sound by a transducer on the listener’s end. Sound-powered telephones first came into use in the 1940s and are still widely used on naval vessels.

From there comes the highlight of the new exhibit: the museum’s collection of mechanical and electrical engine order telegraphs. These devices were used to transfer a navigational officer’s orders from the bridge to the engine room using a dial with a knob attached to a handle. When the navigational officer wanted the ship to sail at a different speed, they communicated it to the engine room by moving the lever. Visitors can see the telegraph in action through video clips from the SS Badger and other ship-centric films, including one particularly memorable scene from Titanic. “This communication was vital,” Gronke said. “They’re about to hit an iceberg. You can’t just have a guy run from the navigation room to the engineer and back. It’s got to be reliable information. They need to know it now.” 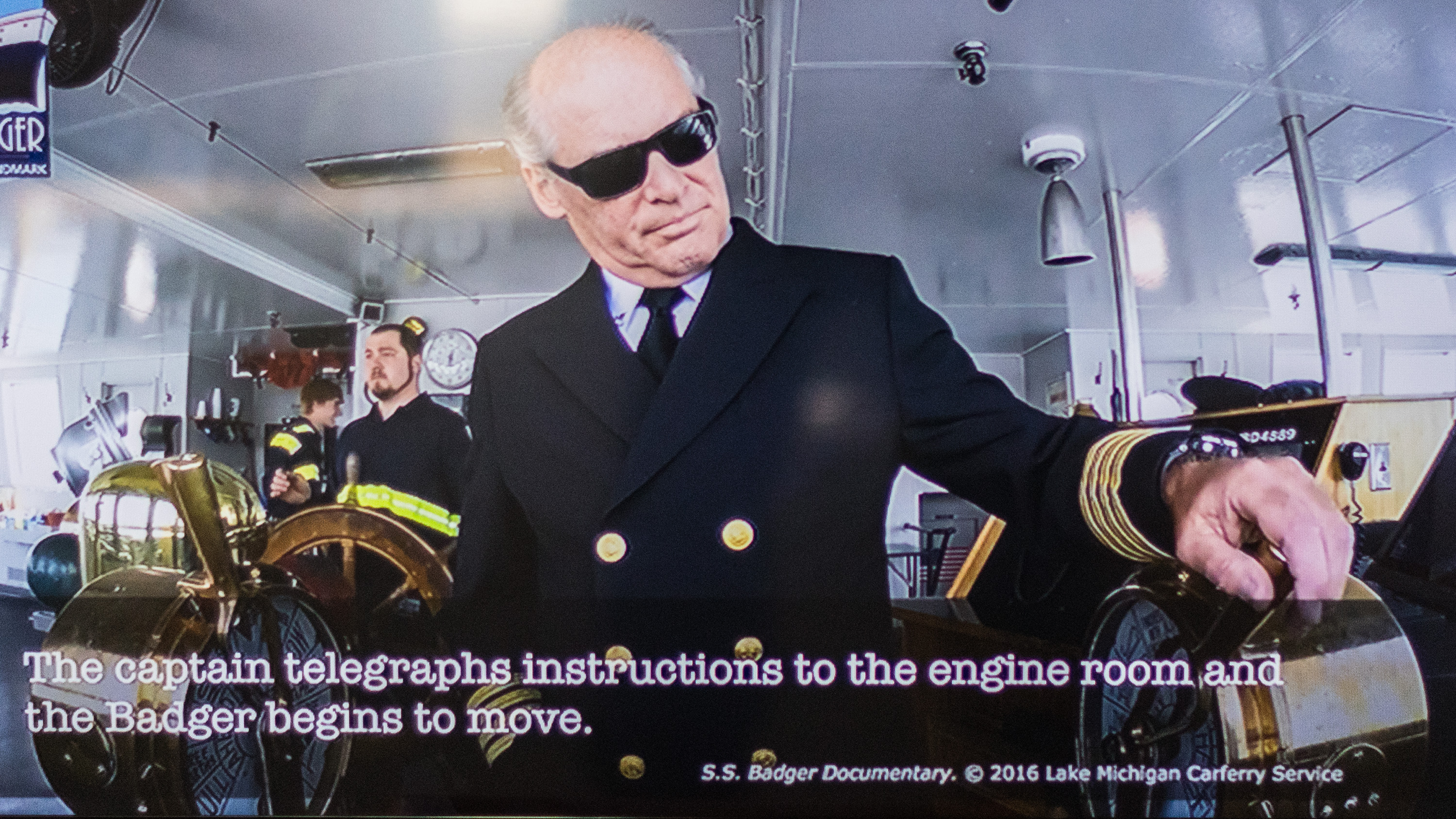 A captain onboard the SS Badger demonstrates use of a telegraph in this video clip, part of Door County Maritime Museum’s newest exhibit, “Telegraphs of the Past.”

The remainder of the exhibit highlights current forms of communication and the stories associated with the museum’s collection of communication-related devices. “Telegraphs of the Past” is on display through November. For more information, visit DCMM.org or call the museum at 920.743.5958.