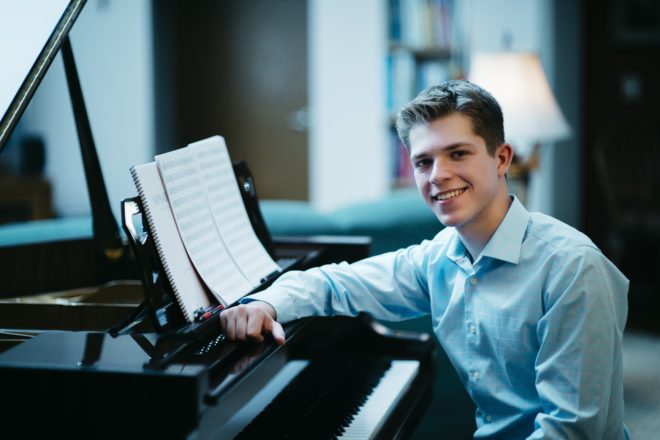 Midsummer’s Music Festival welcomes its first ever Composer-in-Residence, Jacob Beranek, to its summer season. Beranek is a recent high school graduate from Oconomowoc who debuted his Sonata for Violin and Piano at Midsummer’s last year. Photo by Kara Reese.

Like any maturing musical organization, the question of presenting music of our time has been a recurring one. Even though our programming has concentrated mainly on older historical works, including known masterpieces and newfound discoveries alike, we have tried to lace our concerts with a sampling of more contemporary works.

Paul Schoenfield’s “Café Music” has been a favorite. As has Libby Larsen’s “Four on the Floor” and Astor Piazolla’s “The Four Seasons of Buenos Aires.” However, the number of times we have premiered a work or had one written especially for us has been few and infrequent. Then I met Jacob Beranek.

We first became acquainted almost two years ago when he attended several of our Midsummer’s Music concerts with his parents. A graduating high school student in Oconomowoc on his way to Vanderbilt University in the fall, he and his parents spend a good deal of time in Door County at their Egg Harbor condo. Since that meeting I have gotten to know much more about this amazing young man, including his stellar academic achievements, the prizes he has won in both composition and performance (piano), and some of the works he has composed.

Early last year, David Perry and Bill Koehler expressed a desire to perform Jacob’s Sonata for Violin and Piano. We added it to a program we performed for the East High School Institute for the Arts in Green Bay at the culmination of their intensive summer music “boot camp.” These young musicians from very diverse backgrounds had a chance to experience the significant accomplishments by someone of their age group in composition.

Jacob, who is an amazingly confident public speaker with great poise and presence, addressed the group of students and parents before the performance. That performance was such a success we added the work to a Door County concert, which Jacob also attended. Again, he spoke to the audience with great success.

Since Jacob was about to embark on the process of applying to college music schools to further his study in composition, we made a special effort to record one of these performances so he would have a fine representation of his sonata as performed by David Perry and Bill Koehler. We made a dozen copies for him to submit with his applications.

After hearing Jacob’s work multiple times and seeing the positive reactions of audiences and my fellow musicians, I began to think of ways we might encourage this extraordinary talent that would also benefit our organization and our audiences. I also thought this might help us reach out to other young people.

As a result, we have decided to engage Jacob as our first ever Composer-in-Residence, and we have received a generous grant from the MMG Foundation to make this dream a reality. This coming season, we will perform a work for flute, cello, and piano titled Sempre nella luce. This is a work that just won a competition that resulted in its being premiered at the Curtis Institute of Music in Philadelphia in May. In addition, we will present the world premiere of a work titled Death’s Door, which Jacob has composed especially for Midsummer’s Music.

Written for clarinet, horn, violin, cello, and piano, it will appear on three concerts in mid-July. In addition to his work with us as a composer, we expect that Jacob will help us in our efforts to provide meaningful commentary and learning experiences for our audience members throughout the season. We are also talking about what he might write for us for 2018.

In the meantime, we are delighted to welcome Jacob into our family and look forward to introducing this amazing young talent to those of you who have not yet met him. I think you will enjoy getting to know him.

Having completed our programming for this year, I looked back over the landscape to see what we had put together. It suddenly dawned on me that of the 28 works we will perform this season, 18 of them are new to us! That seemed rather remarkable to me in that we have presented well over 300 compositions over the last 27 years. I would have thought that most of them would be pieces from previous seasons.

Perhaps more amazing to me is the fact that many of these “newbies” are by famous composers. We are well known for throwing in a smattering of forgotten gems by unknown composers, but of the compositions that are new to us this year, many are standard repertoire. These include Mozart’s last string quintet, written only a few months before his death. Three works by Dvořák, his Terzetto in C, Op. 74 for two violins and viola, a piano trio, and an early string quartet, the String Quartet No. 1 by Tchaikovsky, and a wonderful trio for piano and strings by Bedřich Smetana are also new to us.

So as we embark on our summertime journey throughout Door County, from Sturgeon Bay to Washington Island and from art museums to churches, homes and restaurants, we are also setting forth on a metaphorical journey to get to know Jacob and his music, the exhilarating Octet for Strings (Op. 3) by Norwegian composer Johan Svendsen, the works of three exceptional women composers of the 19th century presented in one concert, and some tremendously rewarding masterpieces by Johannes Brahms, Gabriel Fauré, Charles-Camille Saint-Saëns, Wolfgang Amadeus Mozart, Pyotr Ilyich Tchaikovsky, Antonín Dvořák, and Bedřich Smetana. We will all peruse some fascinating new and old ground together. Please come explore with us.