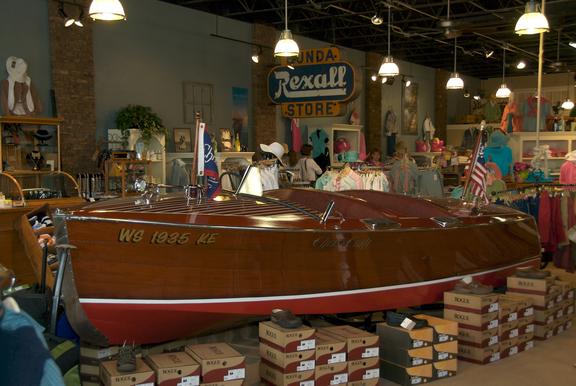 A look inside of the new On Deck Clothing store on 3rd Avenue in Sturgeon Bay.

Walking the quaint streets of downtown Sturgeon Bay, you’ll find an On Deck clothing store nestled on the corner of 3rd Avenue and Jefferson Street, as if it’s been there for decades. Next to the Third Avenue Playhouse and across from Door County hardware, the store looks like it’s part of the town’s established shopping landscape.

But in fact, the Sturgeon Bay location is actually having its grand opening this weekend and has only been open since early May. Merely looking at the exterior of the building however, tells quite another story.

No one would guess that the dark red bricks, which perfectly blend in with the surrounding structures, are actually new and that the building itself was only constructed sometime in the 1970s. That illusion of age was exactly what On Deck owner, Mitch Larson, was going for.

“That’s been the key to our success,” said Larson in reference to the use of historical buildings (and those made to look old) for his other five On Deck locations. “[But] this is a not an old building that we rehabbed, it was in very good shape.”

Built in the 1970s, the building used to house a pharmacy complete with a soda fountain and later was the Corner Cinema. Another building was present long before the one that exists now and also used to be a pharmacy that Larson estimates dates back to the 1800s.

Although the building Larson purchased was structurally sound, it did need a major facelift to infuse charm both inside and out to keep it from sticking out like a sore thumb in its surroundings.

To make it fit among the other buildings in the downtown area, the use of brick was crucial. It’s a material not often used in Northern Door, but native to the Sturgeon Bay area, and one that Larson is partial to.

“When we did the front [of the building] I was on the hunt for brick for a long time. I visited Boulder, Colorado twice, Aspen and old towns in Wisconsin,” said Larson.

He finally decided on using handmade bricks, which are made to look imperfect, much like those from years ago would have looked.

Inside, the building still has an older feel, but with a modern twist. The high, open ceilings, hallophane lighting and brick columns, (made to look like exposed brick) resemble a New York loft. The space still maintains an inviting feeling with earthy hues on the walls and carpeted floors. Perhaps the only thing that gives away the newness of the store is the smell of the fresh paint and new carpet.

Like the other On Deck locations, the store also features an antique Chris Craft boat. Larson said the boat symbolizes the quality workmanship and reliability that the On Deck name strives for.

Another interior feature that sets the Sturgeon Bay store apart from the others is the large Rexall sign hanging from the wall. The sign is from Larson’s grandfather’s old drug store in Sister Bay and adds to the charm of the building. Although not specifically set aside for the new location, Larson happened upon the sign and decided to put it to use.

“Here was a piece of history laying in a barn,” he said. “I’m proud of my history.”

Larson’s grandfather, William Bunda, also opened his first store in the mid-1930s-a grocery store-next to where the newest On Deck location is now. Third Avenue Playhouse now occupies the spot where the grocery store used to be.

Other On Deck locations include stores in Sister Bay, Fish Creek and Egg Harbor, making the newest location the furthest south. It was important to Larson to break into the Sturgeon Bay area, where not only tourism, but also residential living is growing.

“A couple of things excited us about this location; it’s on the corner and we have a new bridge and four-lane highway coming.”

The bridge and highway work are slated to be complete in 2008 and the growth that continues in the area made it crucial for Larson to carry brands and items that appealed to residents and not only tourists. The new store will carry the familiar brands from the other locations, such as Ralph Lauren, Tommy Hilfiger and Crocs, but also features Carhatt and Red Wing work boots, which Larson hopes will appeal to locals.

“The hard working individuals that once frequented my grandfather’s shop are still present today and we want them to feel welcome and appreciated in our store,” Larson said in a press release.

The grand opening this weekend (June 16, 17 and 18) will feature a drawing for a $500 store gift certificate and wine and cheese on Friday and Saturday night. All On Deck store locations are having special sales throughout the weekend and the new location will have extended hours, closing at 9 pm.

A store with hip, trendy brands and an established name and following certainly found an ideal new location – a traditional looking building with a modern twist inside. It exudes Door County charm in a refined sort of way, and you would never know that the storefront at 3rd and Jefferson is only navigating its first season.