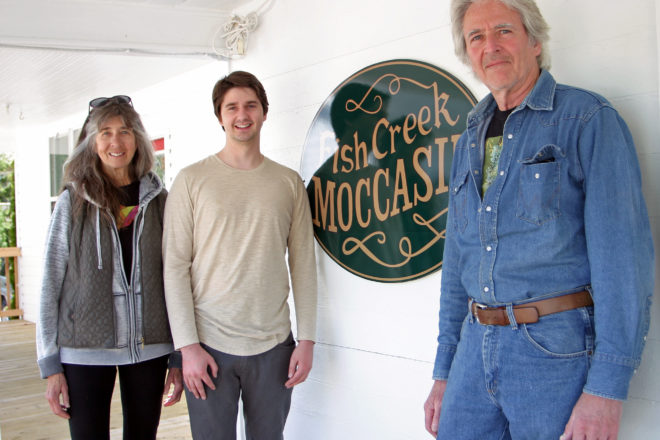 Garrett Doubleday was so intrigued last year by Jim Yonker’s moccasin-making abilities at Fish Creek Moccasin Works that this year, Doubleday is the proud new owner of the business in a new location in the Founder’s Square Settlement Shops in Fish Creek.

He graduated from the University of Wisconsin-Eau Claire in December 2016 with a degree in business marketing. Last summer he took a job at the Door County Adventure Center, when he made his fateful trip to the moccasin shop.

It was mid-May 2017 when he walked into the store.

“Jim was lacing up a pair of moccasins at the desk at the old store,” Doubleday said. “I asked how he made them. He explained a lot. I left and came back and asked if he ever thought of teaching someone else how to do it.”

While he didn’t have time to show him then, Doubleday was persistent and later in the summer emailed Jim and asked again if he might teach him how to make moccasins.

“I asked him if he wanted to make them for himself, for friends or if he wanted to do it as a business. And he said, ‘Yeah’” Jim said. “So we made a pair from start to finish.”

“I wanted to know if it was something I really wanted to do,” Doubleday said. “Jim said he was going to sell the business in the next couple of years.”

“That’s when I recommended that it would be most easily accomplished by buying the retail end, because it takes time to learn and make a product to put on the market,” Jim said.

Suddenly, Doubleday did know what he wanted to do – become the new owner of Fish Creek Moccasin Works, which took place in February.

“I’m just getting my feet under me and finding out how things go,” he said. “Jim and [his wife] Candy have been super helpful.”

While the Yonkers have given up the shop, they will continue to make Jim’s line of moccasins, as well as mentoring Doubleday in the business, which they are very happy to see in the hands of an enthusiastic young person.

“My son built a website for me years ago, but I don’t have that talent for computers. I can use email and that’s about it,” Jim said. “I didn’t have the ability to update the website, where Garrett knows how to do that. When you’re turning over the business to the next generation – my kids weren’t interested – Garrett seemed very capable about taking it to the next level.”

“It’s so wonderful to have a young person taking on what we started. It’s pretty cool,” Candy said.

For his part, Doubleday said he is still learning how important Fish Creek Moccasin Works is to some people.

“A woman came in and wanted a repair on an original pair and wanted to order a new pair,” he said. “She was so happy she started jumping.”