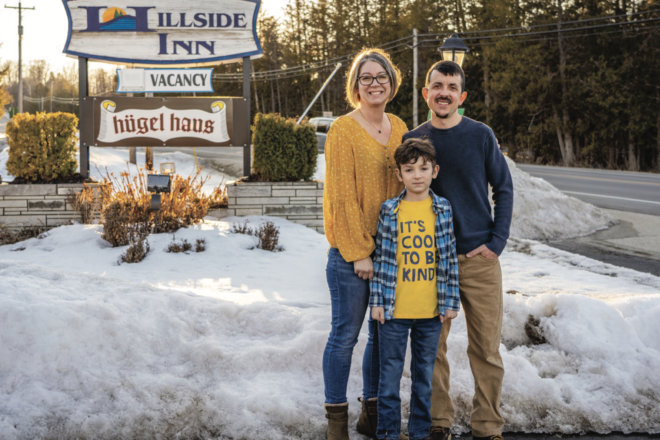 Although ownership of the Hillside Inn in Ellison Bay changed last July, the new owners, Shelly Polomis Hasselbach and Gerald Hasselbach, pictured here with son James, do not intend to change much about the inn itself as tribute to those who made the place what it is today. As part of that tribute, they’re asking for the community’s help in gathering information about the inn’s history.

Shelly Polomis Hasselbach is asking for the community’s help in preserving the history of the Hillside Inn, which she and her husband, Gerald, purchased last July.

“When we bought the Ellison Bay landmark – the original inn dated to the late 1800s – I had a strong pull of emotion to keep it as it is,” Shelly Polomis said. “When you walk in here, to me, it’s Door County. I want to pull as much family and community history into the place as I can. I plan to dedicate one wall of the lobby to a timeline showing the history of all the stages in the inn’s life, the previous owners and how it became what it is today.

“An adjacent wall will be devoted to pictures and memories of community people and guests for whom the Hillside Inn has meant something special. The most important pieces I’d like to get are photos or written material about the original boarding house, saloon, barroom and dance hall – especially pictures with or without the later additions, the fire that occurred in 1965 and the construction that followed it.

“I’m also searching for photos of Ellias Gill, Caroline Ellison – even better, a photo of Caroline and John Ellison [Johna Eliason] together – Chris and Marie Pfiel, Andrew and Bertha Metcalf, Ed Disgarden, Capt. Michael Anderson, Leslie Anderson, Gust Roisier, Viola Reid and Doris and Kenneth Paul. I feel this project will be a great tribute to the families who made this place what it is today.”

Polomis is working with three members of the Liberty Grove Historical Society, including one whose great-grandfather operated the inn for a while before opening what is now the Pioneer Store.

Polomis fell in love with Door County at age 10, when her father, Bob Polomis, married Ann Hollister, whose parents were early owners of the C&C Club in Fish Creek. (Bob is remembered as the builder of many of the log homes in the county.) Polomis spent summers and vacations in Door County until she finished high school in Michigan, then returned at age 18 for her first job as a server at the Bayside in Fish Creek.

“I still remember how nervous and scared I was,” Polomis said. “I didn’t think it was a good fit for me, but Ann, who was also employed there, told me I had a great personality for the hospitality business. She was right. Except for a few years, I’ve been involved with restaurants for my entire career.”

The Hasselbachs live at the Hillside Inn with their son, James.