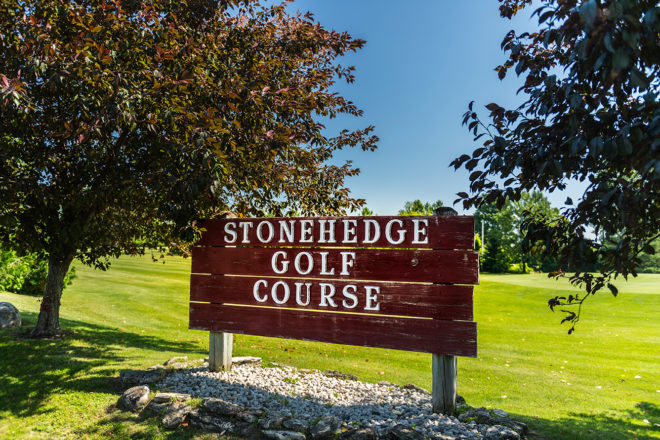 A pair of television executives are still dreaming up what to add indoors and out at Stonehedge Golf Course in Egg Harbor after closing on the purchase just before the new year.

And future patrons, whether they enjoy golf or like having a beer with friends, might just brace themselves for something interesting at the nine-hole golf course and clubhouse east of Egg Harbor.

The buyer, Kevin Wehrenberg, has produced and developed action-comedy game shows such as Fear Factor and Wipeout, as well as the summer Netflix obstacle-course game show Floor Is Lava. His wife, Erin, is senior vice president of network comedy for ABC Entertainment, where she hires writers and guides the development and direction of TV series. She has also worked as an executive for Walt Disney Television. For nine years, she served as the head of comedy development at Warner Bros. TV.

“We’ve been up here many years, and we both love to have a good time,” Kevin said, setting down some tools and taking a break from cleaning, making repairs and working on phone lines inside the pro shop, bar and restaurant building.

The Wehrenberg family and some friends already got started entertaining people during the New Year’s Day parade in Egg Harbor this year. They marched alongside Kevin’s Packers-themed tailgating trailer; handed out hats, shirts and other swag; and carried signs introducing the reopening of Stonehedge Golf Course with new owners in spring 2022.

The Wehrenbergs have owned properties in Door County since 2010, including a house in Juddville and land east of Stonehedge. They started discussing what to do a couple of years from now, and that definitely includes becoming more involved in, and supportive of, the local community. During 2020, they spent more time in Northern Door than in Southern California, where Erin grew up.

This fall when Jon Oswald put the course and buildings up for sale, their realtor gave them a call. Both wanted to start a business and felt that owning a bar was something in their “wheelhouse.” The deal was done almost as quickly as the opportunity arose.

“Kevin has had a lot of ideas over the years, and this instantly felt like the right one,” Erin said.

She said she made up her mind about the Stonehedge purchase even quicker than she decided on Door County for her family’s second home. With fear growing about California’s fire season, earthquake risk and other factors, she and Kevin wanted their sons to have a chance to spend a lot of time in the state where Kevin grew up. They’d been to Eau Claire, the Neenah area and the Northwoods region, but a visit to Door County was convincing to her.

“We talked about various places and where it could be,” she said, recalling one quick visit to Door County when their youngest son was a year old. “I said I could buy a house here; I love it here. And within a year, we did. I instantly felt at home in Door County. It’s just so beautiful. I love the artistic charm. I love that there’s music all over. I love that there’s water everywhere.”

During the onset of the pandemic in 2020, they spent almost three-fourths of their time in the county, working remotely, “and we never wanted to leave and go anywhere,” she said.

The main goal this winter is getting the bar reopened and having the course ready in early May. Kevin wants to build up the back bar and replace a large mirror with a giant TV screen.

“On that wall will be an 85-inch television – I already have it in my house, waiting to be installed,” he said.

He’s a huge fan of Wisconsin sports teams, both pros and college. The UW-Oshkosh graduate and Eau Claire native even named his dog Bucky after the Badgers’ mascot. Patrons should have no problem getting a view of Packers, Brewers or Bucks games.

Kevin said he is impressed by the size of the kitchen and how well appointed it is and would like someone to run the restaurant side of the business.

“I’m looking more for a partner on that side of things – maybe somebody who always wanted to open a restaurant but maybe didn’t have the money to do so,” Kevin said. “I think it’s a phenomenal opportunity for somebody if they’re interested.”

Kevin’s handy and also has experience as the show-business equivalent of a general contractor, so he’s certain he can make some of the family’s ideas for a year-round business come to fruition. As for a hint of those ideas, future customers will have to stay tuned.

“We understand entertainment. We understand that world. My 50th birthday we had up here, and we had karaoke and had the UW Marching Band, and Charlie Berens [YouTube comedian of Manitowoc Minute fame] did a roast,” Kevin said. “It was a lot of fun. Once we figure things out and we start getting some employees, I think we can turn this into something fantastic.”