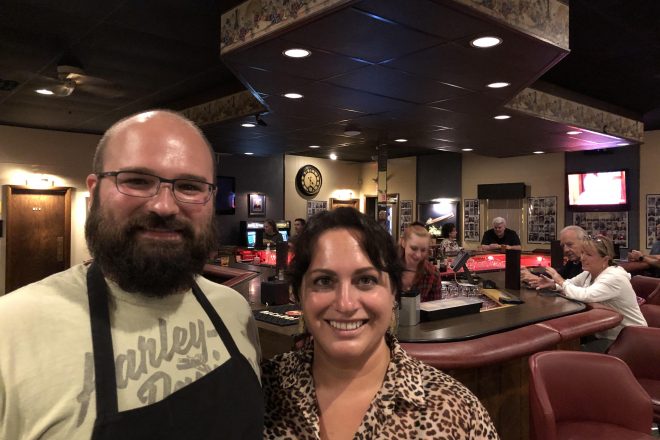 (From left) Newlyweds John Heikkila and Farrah Tafacory aren’t messing with the menu or supper-club traditions at the Nightingale in Sturgeon Bay, but they’re making progress in upgrading the inner workings of the business. Photo by Craig Sterrett.

August 2021 will be remembered as a huge month in the lives of two young Door County natives and also in the history of a business that dates back to 1913.

Keeping the Nightingale in the family, Farrah Tafacory and her fiancé, John Heikkila, finalized their purchase of the supper club from Tafacory’s stepfather, Dave Ripp, on Aug. 15. The two newcomers to restaurant ownership then got married Aug. 21.

“It was a busy week,” Heikkila said of days that culminated in a reception at The Grain Loft in Algoma.

The two aren’t new to working at the Nightingale. Before studying psychology, anthropology and neuroscience at UW-Milwaukee and taking strides toward a Ph.D. in biomedical science at the University of Texas-Dallas, Tafacory worked at the restaurant during high school and college breaks. She also worked at restaurants in Milwaukee and Texas.

But, Tafacory thought her future would be in research and teaching. She came home four years ago for what she imagined would be a short stint, but soon after, she met Heikkila on a blind date that her cousin had set up. The couple then wound up in a position to continue the family restaurant business.

They stepped up during early 2020 to help Ripp operate and rethink the Nightingale when the pandemic required some quick adjustments.

“COVID happened,” Tafacory said when asked what made them think about running the restaurant. “In March of 2020, Dave was like, ‘I’ll sell it to you. You guys want it?’”

“He was ready to shut the doors. He forecasted what was going to happen,” Heikkila said, referring to Ripp foreseeing government-mandated closings and strict health protocols. “He didn’t really want to deal with that after 35 or 36 years of great business.”

Ripp asked the couple to help streamline the business operations. For part of 2020, business was tough: The bar was not open; seating was limited; and most of the sales were takeout meals. Two employees left because they did not want to risk possibly transmitting the coronavirus to elderly loved ones at home as a result of spending time with the public.

The takeout business initially suffered in spring 2020 because the Nightingale still had only one phone line.

“When things were shut down, people wanted takeouts, and it would take, like, 30 minutes to get through because the phone was always busy,” Tafacory said.

They corrected that by June 2020. The couple also set up a point-of-sale (POS) system to handle orders and payments. Previously, the Nightingale waitstaff and the kitchen used handwritten tickets. The restaurant also had separate cash-register and credit-card-processing systems.

“We integrated changes to help make things more efficient,” said Heikkila, who holds a bachelor’s degree in the management of computer information systems and continues to work full time in information technology for Hatco in Sturgeon Bay.

Heikkila combined his skills with Tafacory’s knowledge of POS systems that worked well for other restaurants.

“Setting it up from the ground up was new for us, and straining on our relationship,” Heikkila said. “But we got through it, and I think we have a good system now.”

Other than those workflow improvements and a new logo adapted from Nightingale materials from the 1960s, the newlywed owners aren’t changing much at the restaurant. Tafacory said she’s stepping into an established business with a good reputation, and they’re not planning drastic changes that customers would notice, other than some design and maintenance upgrades.

The two may also look for a curator to set up an exhibit of old menus, matchbooks and memorabilia from the business, which was a café in the early days and had a dance pavilion attached to the supper club during the middle of the 20th century.

Almost all of the staff has stayed on with the business, and both Heikkila and Tafacory say they appreciate the support and help they’ve received from the employees during the transition.

Heikkila fills in wherever he’s needed, whether that’s as a line cook, or helping behind the bar, or working as a host. But he does not act like he’s in charge of the back of the house.

“Marcia is the boss back there,” Heikkila said of head chef and kitchen manager Marcia Brauer, who has 37 years with the business. “She holds reign over the kitchen, and she always will as long as she’s here. Everyone here, for the most part, has been here longer than me.”