When The Hitching Post closed its doors last fall, it was simply one of the many local businesses to retire for the harsh winter season. However, come spring of 2014, the Hitching Post had been vacated, with no plans to reopen. The iconic local establishment appeared to be “closed for the season” for an imminent amount of time. 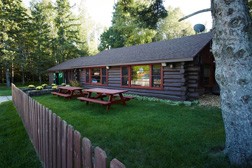 Fortunately, new owner-operators Tim and Christina Klemm embraced The Hitching Post’s history and have reopened the business to the community as of Sept. 13.

Ewald Schmock built the log building destined to become The Hitching Post in 1949. Standing just off of Glidden Drive, the rustic structure was originally erected as a clubhouse for the nine-hole golf course located behind the lot. Although the golf course didn’t flourish, the clubhouse became popular among locals as a gathering place.

The Hitching Post first came to be in 1956, when Marilyn Marr and Bill Koepp, Jr., or “Marney” and “Buggs,” purchased the lot that the log building stands on, turning it into an owner-operated restaurant and bar. The Koepps added the walk-in cooler and living quarters, which made it easier to raise their two daughters while running the business. During these early years, The Hitching Post became known for its delicious fish chowder, fish fry, 15-cent beers and Marney’s secret salad dressing recipe.

The restaurant came under new ownership in the 1980s, after the Koepp family relocated, and after several proprietors, Hugh Daubner purchased it in 1989. Hugh quickly became known as “Huey,” a local who reflected the charm of the community, always putting a smile on customers’ faces. His charismatic character fit perfectly with the welcoming atmosphere of “the post,” and the bar continued its reputation as the local watering hole, serving up a popular fish fry year round and sponsoring many community sports teams, including softball, darts and trap shooting.

The Hitching Post became a meeting place for local clubs year round and a summer mainstay for vacationers, taking pride as a local establishment.

Michael “Brody” Kidd, who spent summers nearby in Whitefish Dunes, remembers begging to be hired as a dishwasher in order to be paid in Baumeister Root Beer and fried cheese curds. 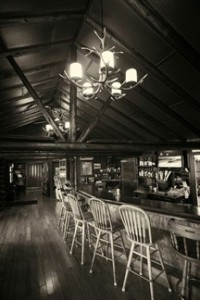 “Over the years, I looked forward to spending days with Huey at ‘The Post,’ helping serve the Friday night perch dinner until the fish ran out,” says Kidd. “It practically became a second summer home. Once, as a kid, I crashed my bike, and instead of heading home, I went straight to the Post, where I knew Huey would help patch me up.”

After many years as the proprietor, Huey sold the restaurant to Mark McClellan and Amy Luckett, who owned and operated the establishment until the end of the summer in 2013.

After business closed its doors last summer, it remained closed and in disrepair until Tim and Christina Klemm purchased it in the spring of 2014. Tim Klemm, originally from the Chicago area, also remembers The Hitching Post from his boyhood vacations. Those fond memories are what prompted him to buy land across from the restaurant several years ago. As he and Christina were planning to start construction on their home, they learned of the post’s vacancy and couldn’t pass up the opportunity to lease it. They have been fully committed to the rebuilding of The Hitching Post ever since.

Initially, the road to reopening was rocky, as a mass of frozen pipes and appliances needed repair or complete overhaul. But with business know-how from previous management experience, Tim and Christina worked hard over the course of three months to get the building back up to code. With repairs finished, they carefully considered their business plan options, including reopening as a café. They decided that keeping The Hitching Post culture and adding to its history was the best course of action, and are more than happy that they did.

“Since reopening, I’ve had many customers tell me stories about coming here throughout the past several decades, even back to when Buggs and Marney operated the place in the 1950s,” says Tim. “I knew that The Hitching Post had a rich history, but having the opportunity to hear these stories firsthand has been exciting.” 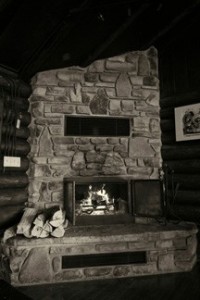 The Hitching Post Café and Pub opened mid-September, now serving Door County Coffee with seasonal lattes, cappuccinos and espresso made from a professional-grade coffee machine in addition to the pub offerings. The kitchen opens at 7:30 am for breakfast every day except Tuesday, offering classic plates of omelettes, pancakes, French toast, eggs and bacon.

The main menu features a variety of specialty burgers with 100 percent Angus beef burgers, soups, sandwiches and, of course, the Friday fish fry, which uses fresh fish. As for the liquid libations, the Post has the standard cocktail and beer offerings, as well as eight beers on tap, wine and a selection of top-shelf liquors. The bar staff is currently working on crafting a martini list to give customers a wider selection of cocktails.

Stop in to welcome Tim and Christina to the community, have a pint by the log-burning fire, savor the ambiance and take part in the continuation of The Hitching Post.