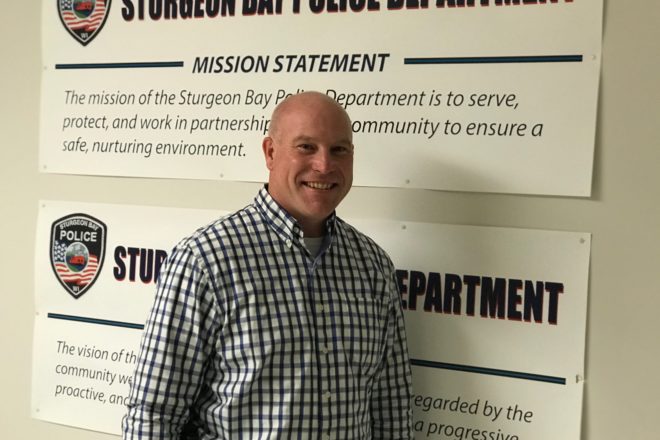 One of Door County’s own has been selected to lead the Sturgeon Bay Police Department starting Oct. 2, when Chief of Police Arleigh Porter retires from his 40-year career.

The Sturgeon Bay Police and Fire Commission (SBPFC) promoted Lt. Clint Henry to chief of police Sept. 18 after interviewing Henry and the only other candidate, Capt. Dan Brinkman, during a meeting that day.

“The Police and Fire Commission had a very, very difficult decision to make,” Porter said. “Capt. Brinkman is an extremely valuable person to this department. He’s been someone that I’ve been able to lean on now for my 10 years I’ve been here [as chief], along with the lieutenant. They couldn’t have gone wrong with either choice.”

“Now it will be up to Chief Henry to negotiate with the Common Council his wage and benefits package,” Porter said.

Porter said he believed Henry is the first chief to have been born and raised in Door County since Howard Larson – the person who hired Porter as a deputy 40 years ago. Henry graduated from Sturgeon Bay High School, attended Fox Valley Technical College and was a police officer for the city of Marshfield, Wisconsin, before joining the Sturgeon Bay department in 2005.

“I was really glad to come back and give back to the community that treated me so well growing up,” Henry said. “I’ve always considered Sturgeon Bay home.”

Henry quickly rose through the ranks, becoming a sergeant in 2007 and, in 2011, lieutenant – the department’s third-highest position in charge of all patrol officers. Henry, 46, said he’s honored to have been selected as chief.

“I’m excited about the new challenges ahead,” he said. “We have a great community. I couldn’t be prouder to be police chief of Sturgeon Bay.”

Brinkman had high praise for Henry and congratulated him on receiving the position. As for himself, he said he awoke Saturday morning feeling at ease and at peace with the decision, and he felt as if a big weight had been lifted from his shoulders.

“My job right now is to ensure [Henry] has a smooth transition into the chief’s office when Arleigh walks off into the sunset Oct. 2,” Brinkman said.