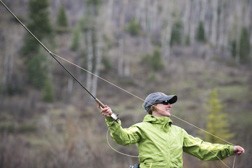 “The State of the Trout” details the status of 28 separate species and subspecies of trout and char native to the United States. Of those detailed populations, three are already extinct, and more than half of the remaining trout and char populations occupy less than 25 percent of their native waters.

While the state of trout in America is tenuous, there are success stories that prove trout recovery is possible – the report lays out a roadmap for that recovery.

Trout Unlimited’s staff of scientists spent more than a year preparing the detailed report with input from TU’s field staff and independent, federal and state fisheries experts. The full report is available in digital form at tu.org.

“Native trout are in trouble in the United States,” said Chris Wood, Trout Unlimited’s president and CEO in the report’s foreword. “But we are making a difference and with help, involvement and action can promise a future of recovery, not one of loss, for our children.”

Non-native species and climate change head a long list of challenges facing trout, which also are under pressure from increased demand on the nation’s water resources, loss and degradation of habitat, and different types of energy development. For more information, follow Trout Unlimited on Facebook and Twitter.