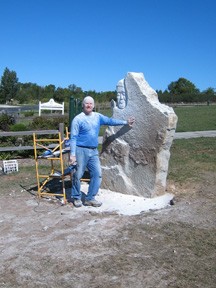 Jeff Olson sculpted his vision of “The Performers” from an imposing limestone boulder at Egg Harbor’s Peg Egan Performing Arts Center on Church Street. Olson began on September 8 and estimated that it would take him one week to carve the two figures, each with an instrument, around the rock.