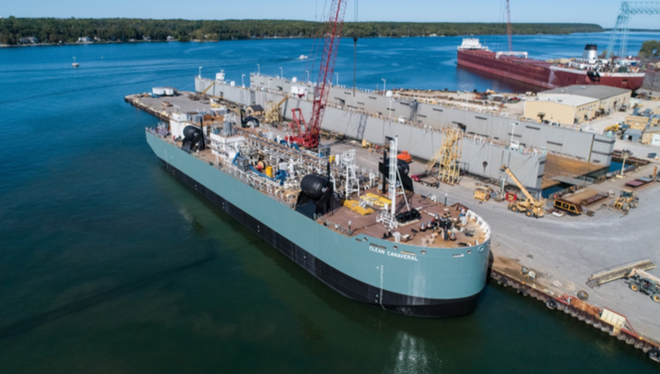 The sister boat to the Clean Canaveral, launched in September and scheduled to be delivered in mid-November, will also be constructed at the Sturgeon Bay shipyard. Fincantieri Bayshipbuilding photo.

A new bunker barge has been commissioned from Fincantieri Bay Shipbuilding. It’s a sister vessel to the bunker barge Clean Canaveral, which is currently docked at the Sturgeon Bay shipyard and will be delivered to its owner, Polaris New Energy (Polaris) in mid-November.

Fincantieri Bay Shipbuilding will partner with PNE Marine Holdings, an affiliate of Polaris, to build the sister barge.

The new LNG (liquified natural gas) ATB (articulated tug and barge) will be 340 feet in length and 32 feet, 10 inches deep, and have a 66-foot beam. It will be an Oceans Classed ABS (American Bureau of Shipping) barge.

LNG is considered the leading solution to fuel the maritime sector as the industry advances its sustainability goals by transitioning to lower-carbon fuels. The new ATB will add to Northstar’s growing fleet, which is delivering LNG to cruise ships, container vessels, bulk carriers, car carriers and tankers that are in service or on order.

About working on the second barge with Fincantieri, Casey said, “Despite the global challenges of the last two years, they have performed above expectations, and we are confident that they’ll do the same with this second barge as they leverage their unmatched experience gained during construction of the Clean Canaveral.”

“Thanks to our continued partnership with Northstar and its affiliate companies, we are amassing our extensive in-house expertise in the design and construction of LNG bunker barge capabilities,” said Todd Thayse, Fincantieri Bay Shipbuilding’s vice president and general manager. “The hard-working, proud women and men of Fincantieri Bay Shipbuilding will once again provide the quality and eventual on-time delivery the maritime industry has come to know and expect from our shipyards.”

He began working at Fincantieri Bay Shipbuilding (FBS) more than 37 years ago and has spent the past 10 years as its vice president and general manager.

He will remain with the company through mid-January to ensure a smooth transition for the incoming VP and general manager, Craig Perciavalle. After that, Thayse will have an advisory role within Fincantieri Marine Group, the corporate entity that oversees FBS.

“The timing of one’s retirement is not an easy decision,” Thayse said. “Especially when you enjoy what you do and the people you get to work with every day.”

Perciavalle comes to Fincantieri after serving for years as president of Austal USA in Mobile, Alabama. He has an extensive background in the shipbuilding and repair industry, having worked at several Gulf Coast shipyards. Perciavalle holds a bachelor of science degree in marine engineering systems from the U.S. Merchant Marine Academy.