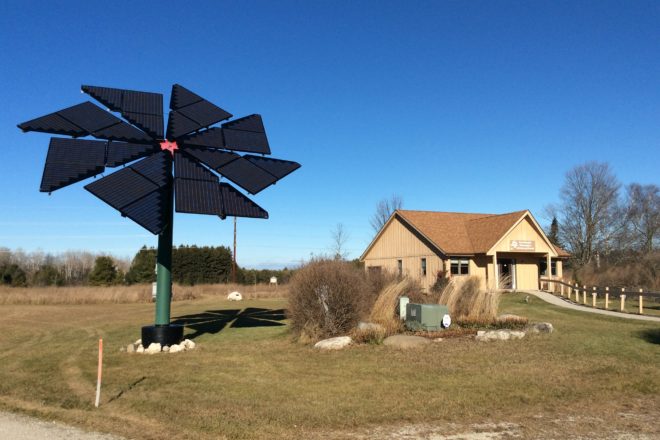 After 20 years of operation, the Leif Everson Observatory (L.E.O.) has some new eyes on the night sky. In a move to reach a new and evolving group of enthusiasts, the Door Peninsula Astronomical Society (DPAS) has invested in a larger primary instrument optimized for observing in this digital era. With 30 percent more light-gathering power, a wider field of view, and a mirror design that produces sharper images without off-axis optical errors, this “beast,” as Observing Chair Dave Lenius calls it, promises better video and still imaging of the more elusive deep sky objects.

Replacing the L.E.O.’s original 14” Schmidt-Cassegrain reflector with its corrector plate/parabolic primary mirror design, the 16” diameter Ritchey-Chrétien (RC) reflector borrows its hyperbolic mirror technology from the Hubble Space telescope and virtually every other high performance professional observatory telescope installed since the 1948 Hale’s 200” parabolic mirror design. When Taiwanese instrument manufacturer GSO (Guan Sheng Optical) turned its attention to building a quality, large aperture RC telescope, it opened up the availability of a professional-style, dream telescope to smaller observatories and amateur astronomers. Using funds earmarked for such improvements, the DPAS took this opportunity to keep the observatory equipped with the current state-of-the-art technology.

The new primary scope is a “truss-tube” design that saves the weight of a continuous housing and, by using carbon fiber struts, saves additional weight and provides extreme rigidity with low thermal expansion for image stability. Even with all its weight-conscious design, this new “beast” tips the scales 75 percent heavier than its predecessor. Three healthy and determined astronomer-installers broke a sweat wrestling the unit into what is now a more confining dome. The portable wheeled ladder that previously could be easily positioned for access to the eyepiece will now need to be replaced or rebuilt to remain clear of the motions this longer and wider tool needs to access the universe.

In addition to the RC scope, a 7.1” Maksutov-Cassegrain companion scope was installed for planetary and lunar viewing to provide sharp, high contrast images, free of chromatic or off-axis aberration. The classic long focal length of f/15 produces inky dark background skies so that celestial targets stand out beautifully. Attached “piggy-back” on the Observatory’s sturdy Paramount ME computerized mount, both instruments can simultaneously photograph or stream viewing targets, and allow visual observing.

The first public introduction to the new equipment is during the Society’s 2018 “Waves” Astronomy Day on Oct. 20, 2018 at the Observatory/Astronomy Center on the grounds of the Crossroads at Big Creek, using the entrance at 2200 Utah Street. Also registered as a NASA International Observe the Moon Night event, and as part of the Wisconsin Science Festival, Astronomy Day programs begin at 1 pm at the Astronomy Center with unique “micro dome” planetarium shows until 3 pm. These shows will be presented by Aram Friedman of Ansible Technologies, who developed this format specifically to bring the universe into the classroom, and it is something to see!

Join the Society on a tour of the observable universe, from our solar system to the furthest quasar. See the exo-planets, other solar systems in our back yard, as we hunt for another earth. View the invisible universe at wavelengths our eyes can’t see. See evidence of the Big Bang. Explore our own sun.

Continuing on at the Astronomy Center/Observatory from 2 – 4:15 pm, tours of the Observatory and the Astronomy Day activities will occur. Family-oriented and hands-on exhibits of wave-related themes in astronomy, a telescope “petting zoo,” and other informational resources will be displayed. A 4:30 pm rocket launch will signal the transition to NASA’s International Observe the Moon Night, where, as the moon rises we will focus telescopes and binoculars on it, the sun, and the planets visible as the sky darkens. The new observatory equipment will point to the moon with images being streamed into the Astronomy Center’s large screen TV where they can be viewed and discussed. A “First Light” ceremony honoring the telescopes will be held at 6 pm.

Then, at 7 pm, at the Crossroads Collins Learning Center, Dr. Michael Olson of St. Norbert College will address Einstein’s “Spacetime” in a special demonstration/lecture. After 20 years of searching without success for these waves, or ripples in spacetime, a newly modified LIGO detected the “echo” of the collision of two “black holes.” Dr. Olson will describe this feat, and demonstrate the technology, streaming live video from his tabletop detector and playing audio of what the gravity waves might sound like, if we could hear them.

All Astronomy Day events are free and open to the public. For more information visit doorastronomy.org or contact [email protected]

The Door Peninsula Astronomical Society holds monthly membership meetings at the Astronomy Center at 2200 Utah St, Sturgeon Bay, on the first Tuesday of each month (except January) beginning at 7 pm, where beginning and advanced astronomy programs are offered. Viewing nights are also scheduled monthly on Saturday nights, usually nearest the New Moon. Times and dates can vary. Both activities are open to the public.