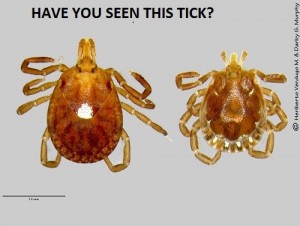 Photo courtesy of the UW-Madison Department of Entomology.

It shouldn’t be news to anyone that it’s a bad year for ticks, but the University of Wisconsin – Madison’s entomology department has made an observation.

A new species of tick is in town – the Lone Star Tick.

Lone Star Ticks are pretty easy to identify – a female has a white splotch on its back, and a male has a white mark on either side of its back. They don’t transmit Lyme disease, but are known to transmit other bacteria that cause disease.

It’s gross, but you could help Paskewitz with her research. If you happen to pick up a Lone Star Tick, either take a picture or send the bug to Paskewitz’s lab along with information on where you found the blood sucker. Contact [email protected] if you find one.

Want to read more about ticks? Check out the Pulse article that ran in June, Ick… Ticks; It’s the season to be aware of blood-sucking bugs.