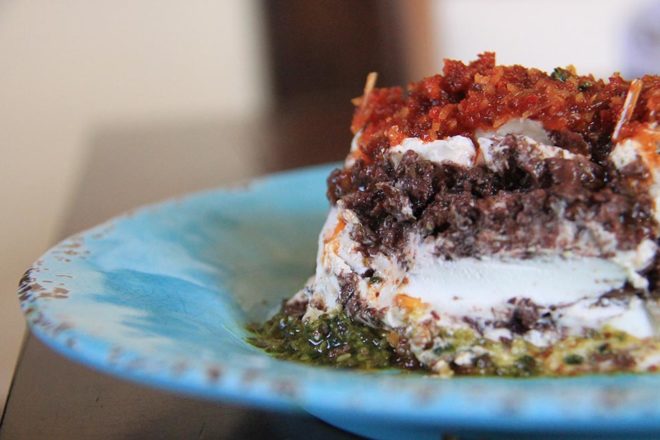 The Milwaukee-based author has written for many nationally recognized food and travel publications and regularly contributes to Milwaukee Magazine, covering the state’s agriculture industry and its many personalities. She spent 2018 exploring the rich history and present diversity of the state’s creameries and cheesemakers, doing a deep dive into the culture of cheese. The result is a cheese-laden cookbook telling the stories of these remarkable artisans.

In the spring, Jesse and Rachael Johnson (along with their staff, known as #TeamCream), are busy around the clock birthing more than 250 baby goats. It’s demanding, but the kidding season brings a tidal wave of goat milk, which the creamery turns into delicious chèvre, various hard-cheese varieties, gelato and moisturizing goat soap.

The Johnsons first opened the creamery’s doors in 2013 with the goal of “giving the Door County community the opportunity to fall in love with fresh, local cheeses, just [as Jesse did] in the French countryside.” They have since expanded to serve a full lunch menu, provide catering trays and service, give farm tours and even host goat yoga. The creamery also stocks a variety of Wisconsin-made, artisan home goods and kitchen gadgets.

“I felt like I was walking into a shop in Sonoma or Paris,” Hansen said of her visit to the creamery. “So many artist-made culinary gadgets for the kitchen. I love how visitors can peek into the glass-walled creamery to get a glimpse at how cheese is made.”

Hansen shared several Door County Creamery recipes in her cookbook, noting that “Jesse’s cheese recipes really reflect his chef training and background, going beyond what you’d expect and instead coming up with recipes like a goat-cheese torte or chocolate ravioli with chocolate ganache, goat cheese and raspberry coulis.”

To create this recipe, I used a mix of plain chèvre and ramp chèvre. The chèvre can be found at local grocery stores or at Door County Creamery. It’s easier to let the cheese come closer to room temperature before layering; otherwise, it’s rather hard to spread. Serve the torte with bread, toast, crackers or vegetables for a delicious appetizer, or spread it on a bagel or sandwich for a larger meal.

Line the bottom of a serving bowl or container with plastic wrap.

Make layers of torte by spreading on top of each chèvre layer a thin tapenade layer, topped with chèvre, then a generous layer of pesto, followed by another chèvre layer.

Fold the plastic-wrap edges over the top. Chill at least two hours or overnight.

To serve, unfold the plastic-wrap edges and flip the torte onto a serving plate. Top with tomato purée, then arugula.