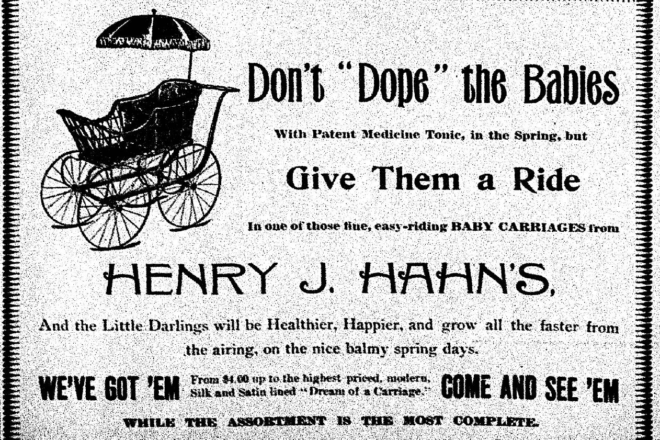 THE great need of this section about now is a man with brains enough to construct an Almanac with Spring placed where it belongs. Snow falling 12 inches deep the 20th day of April, convicts all of our Almanacs of libel.

The Eagle Hotel building at Clay Banks, the property of Mr. Charles Hitt, burned to the ground Wednesday afternoon last. It was a total loss, the insurance having expired only a few days ago. The property was valued at from two to three thousand dollars.

For some time past residents in the first ward, in the vicinity of the island have been victims of petty chicken thieves. The latter part of last week Eugene Birmingham had a couple of ducks, valued at five or six dollars, stolen. Wm. McDonald was arrested charged with the offense, found guilty and fined $10 and costs, and in default of payment he was given thirty days in the county jail. Presumably about the only difference this makes to McDonald is that he will get his meals regularly. He usually spent his time during the day in idleness and at night slept aboard a small hooker lying at one of the docks the owner having given him this privilege. His wife and child are supported by the city, being inmates of the poor house. The city fathers have investigated his case with a view to ascertaining what could be done with the fellow but it was found the conditions of the case were of such a nature that it would be against the interest of the city to tamper with it, and the matter was dropped.

Sawyer has another auto, which is the property of the Sawyer Implement Co., for use of the company. The car is a 30 h. p. Cartercar. F. P. Battershill and Ed. Hunt went down to Milwaukee after it on Thursday of last week, arriving here with the car on Sunday. It took them nine hours to cover the distance home, which was anything but a pleasant run on account of the heavy rain and muddy roads. The car is a friction drive, being possibly the only one of this type in this immediate vicinity. A garage is being arranged in a section of the company’s warehouse which would indicate that the auto business is to be a regular thing with this concern.

A representative of the High Falls Power company, which is to furnish electric current to the cities and towns between here and Green Bay, was in the city Monday and Tuesday looking over the situation. He called on some of the large consumers of power current to get a line on the amount of business that could be guaranteed in case the company extended its lines to this city and investigated the possibilities of the field for an increase in the future, all of which is to be reported to his company.

Nothing definite was arrived at, but he stated that he would make another visit here next week at which time it was hoped that some conclusion would be arrived at as to the possibility of the company coming here.

A. E. Doolittle, superintendent of the Door county state parks, and a group of interested citizens spent Saturday afternoon at the Government Bluff investigating routes for the proposed road to be built. Mr. Doolittle has secured an appropriation of $2,000 for road purposes in the new park this year, and the purpose of the meeting was to gather the sentiment of those interested as to where the roadway should be built.

It is probably that the road will be extended from the Nasewaupee town road leading itno the quarries to the Daisy Field or as far as possible towards the bluff. It was proposed to widen the road twenty feet and to cover it with crushed stone. Due to the limited amount of money no grading will be done this year.

Mr. Doolittle is staking out the proposed route this week and when finished bids will be called.The site chosen at this time will continue to be the route through the park, no change to be made in the routing after once it is established. The plans are to extend the road each year, over the bluff and again out to the main highway. Perhaps in the future, tourists will be rerouted so that they may return through the park.

Invitations were mailed out this week for the formal opening of the recently remodeled Panter hotel at Baileys Harbor, which is to take place Saturday, April 25. Mrs. Panter and son Cecil will hold open house for all of Door county at the formal opening.

The hotel has been completely remodeled under the supervision of Henry Seiler, Baileys Harbor contractor, and has been made modern in every respect. The dining room which has been enlarged as well as being modernized, has an entrance from the street and overlooks beautiful Lake Michigan, affording as well, a cool atmosphere for the dining guest.

Cooking, an art for which Mrs. Panter has long been praised, will continue to be of the same high standards in the future as it has in the past, as Mrs. Panter will continue to supervise the preparation of every meal. Cecil will have charge of the bar and lunchroom, which has also been completely renovated.

An orchestra will be engaged to provide dinner music throughout the summer months.