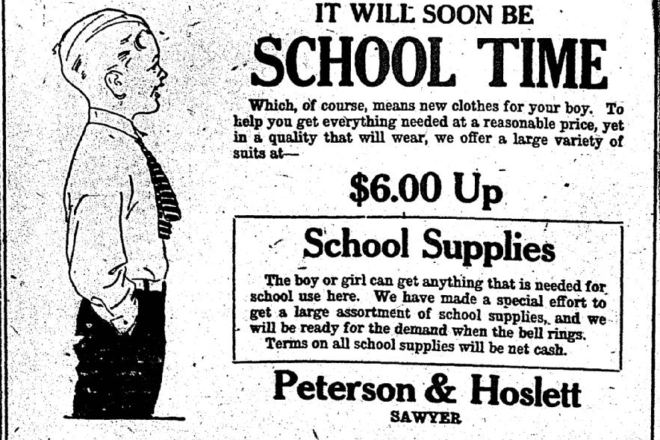 Judge Wright was evidently sober when he wrote that long communication in the Advocate yesterday opposing the village incorporation, as he knew enough not to sign his name to it.

Benj. J. Erskine, president of the Self-button-Sewers Association of Northern Door county, and the original and only sea-serpent breeder, was in the city Saturday to receive several leather medals as the champion campaign flag designer in these woods.

The Menominee River Brewing Co. has established a depot in this part of the city for the purpose of supplying their many customers in this locality with beer, a part of the Chas. I. Martin cold storage warehouse having been rented for this purpose. It is only a comparatively short time since this company turned their attention to this locality with a view to marketing their product, yet in only a few months the demand for the amber fluid manufactured by them has been made necessary. F. A. Rayman has charge of the company’s affairs in this county and his ability as a hustler has something to do with the firm’s success.

At a meeting of the library board Thursday evening, the committee appointed to select rooms for the public library, recommended a suite of rooms in the new Pinney building, at the corner of Cedar and Spruce streets. Their recommendation was approved of by the library board, and the contract will be entered into at an early date.

A librarian was not appointed at this meeting, there being a large number of applicants to choose from. The salary, however, was fixed at $25.00 per month.

Once again Door county has been called upon to give the life blood of one of her sons to the cause of world democracy.

On Saturday a telegram was received from the war department by relatives announcing that Andrew E. Laubenstein had been severely wounded in action on August 1st.

Private Laubenstein has the distinction of being the first drafted man from this county to be injured in the service of his country. He was inducted into the services on November 18, 1917.

Private Laubenstein is 24 years old and the son of Mr. and Mrs. Andrew Laubenstein of Nasewaupee, the family residing on what is known as the Little Sturgeon road on the RFD 2, Sawyer.

CHARLESTON WINNERS AT THE GRASSHOPPER

There was a large attendance at the Charleston contest at the Grasshopper dancing pavilion on Friday evening, the place being filled to capacity.

Miss Fannie Brown, Milwaukee, was awarded first place in the ladies contest and Ray Winters, Chicago, captured the prize in the gents’ contest.

There is to be another contest tomorrow evening, the winners of the prizes last Friday being barred from competing.

D.C. Peters told The News this week that the new cherry juice drink, recently perfected, is being manufactured locally and bottled at the Pleck Dairy plant. Mr. Peters stated that the drink is meeting with popular approval not only at resorts and soda fountains, but is being called for by a large number of people who are returning to their homes in other sections of the country.