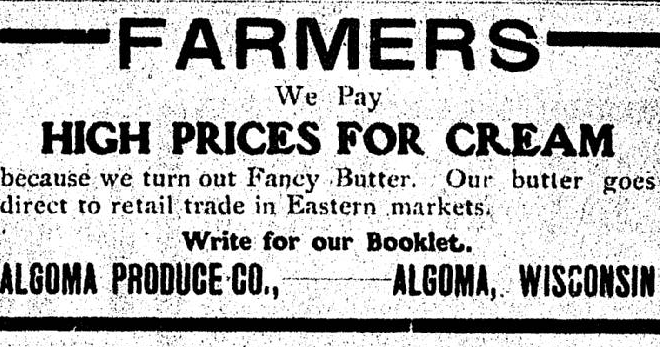 PROBABLY LOST:  Mr. Simonson and son residing at the Door, started from Washington Island on Sunday, Jan. 9, in a skiff to cross the Door to their home on the main land, since which nothing has been heard from them. They are probably lost. Soon after they left the island a violent gale sprang up from the northward accompanied with snow, which set all the ice along the shores adrift, and probably drove them before the ice out into the lake. They had no compass, and no provisions save half a loaf of bread. They could not long withstand such a gale and storm in so cold a night in an open skiff upon Lake Michigan.

Mark Holt, Thomas O’Niell and Emil Winjam captured a sturgeon five feet, three inches long, weighing about seventy-five pounds, in Green Bay a little to the northwest of Thayerport. It was captured in a gill net and it took considerable of an effort to secure it.

Messrs. Thorp and Spencer commenced running their stages across Green Bay between this city and Menominee and Marinette on Wednesday. Passengers are transferred to wheeled vehicles at either end. The ice is said to be in most excellent condition for travel.

The smoking car on the Ahnapee & Western R.R., which leaves here every morning, has had three close calls from being destroyed by fire during the past two weeks. The blaze has started in the roof over the heater each time but has been discovered by the R.R. night watchman in time to put it out before much damage was done.

Cherry Birds – Not to be outdone by the robins the cherry birds have made their appearance. Avery Birmingham assures us that on Thursday of last week he saw several of them in his orchard in the town of Sevastopol. The birds have either been fooled by the mild weather or they anticipate a large crop and want to get in on the ground floor with the robins when the fruit matures, evidently being under the impression that we are not going to have any very cold weather from this time on. It is our humble opinion that some of these early birds are in for the biggest surprise of their little lives,if they have not provided themselves with other than their summer apparel.

Hurt in Runaway – Cedric Dreutzer received a cut over one eye that required several stitches to draw together when he was thrown from a sleigh when his team ran away Monday about noon. While he was passing the Moeller garage an auto came out of the door and the team became frightened and broke away from his control and dashed up Garland street, throwing him out. The team was stopped shortly afterward,without suffering any damage.

A federal permit for the manufacture of beer has been issued to the Schoenbrunn Brewing Co. of Sturgeon Bay, and the announcement was made at the brewery on Tuesday that work of brewing would be commenced as soon as materials arrive. Plans are to have beer ready for distribution by Easter, and many old timers have stated that they hope the brew, which will be known as “Cherry Circle,” will compare with that manufactured before the days of prohibition, when the local product was known far and wide for its potency and fine flavor.

Vernon Olson will act as manager; John March will be the brewmaster and his son John Marsh, Jr., engineer and assistant brewmaster. Other employees at the plant will be Otto Bridenhagen, cellar man, Alfred Evenson, assistant in the cellar, and Mrs. A. Kerscher, bookkeeper and office secretary. Ed. Paul will be in charge of distribution.