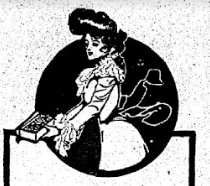 That Circus at Green Bay last Monday was attended by about 60 persons from Sturgeon Bay, who carried off and spent out of the county $300 to $500 and did not bring back one cent’s worth of value for the money spent. Now these 60 persons are busy grumbling because there is no money, and that our knavish business men will not pay them cash for their wood and produce.

Having made everything solid with Uncle Sam, and promised to support the constitution of the United States in case the constitution is not able to support itself, Peter Hahn has received permission to proceed with his business and is now manufacturing cigars in the good old Pennsylvania style. He knows tobacco when he sees it, for he comes from Lancaster, where they don’t raise much of anything else besides tobacco and peaches.

Must Keep Off the Walks.

The city council have instructed corporation attorney Jas. Keogh to draw up an ordinance prohibiting the riding of bicycles on the sidewalks on any of the streets of the city. An ordinance has long been in force barring cyclers from using the walks on cedar street within certain limits, but now that the number of wheelmen has been so largely increased, there has been many complaints made by pedestrians on side streets. The complaints, however, have been mostly all caused by the unavoidable “crooked riding” of beginners, and which is certainly dangerous to pedestrians on the walks.

There will be the same number of saloons in this ward [Sawyer] during the ensuing year as there has been for sometime past. There are ten altogether, which is about twice as many as the new law allows. Many of our citizens had thought that when the new law, which allows only one saloon for every 250 inhabitants, went into effect, it would close at least half of the drinking places. Some of the saloon keepers had made preparations to go out of business but when it was learned that if they retired at all, no one else could start a saloon in the building, they immediately had their licenses renewed.

Disciples of the King Pay Tribute to

His Memory on Monday Night.

Are On Water Wagon

With the passing of John Barleycorn on Monday night, the occasion was made one of joy and hilarity by the followers of the High Ball.

There was no “rough house” reported in any of the places doing business in the city. It was a good-natured celebration that was participated in by some of the best citizens in the community and there were no disorders or arrests made.

The saloonkeepers were given an hour of grace by the city authorities being that it was their last opportunity to sell their stock of goods, this being the hour fixed by the government when the selling of alcoholic and intoxicating beverages would be forbidden.

Later the doors of the saloons were decorated with crape, which was still up on the following morning.

Up to the last moment the saloonkeepers looked for a respite from President Wilson, but on Saturday when a cablegram was received to the effect that he had been convinced that he had no authority to revoke the order “at the present time” the last hope vanished.

G. A. Huck was again arrested on Tuesday afternoon following a raid by the local police force in which five gallons of moonshine was alleged to have been found. On April 16 the Huck barn was raided and Huck was placed under arrest on the charge of selling to minors. He was bound over to await trial at the next term of circuit court.

Felix Fortemps, of the Fourth ward, was also placed under arrest on the charge of illegal sale of liquor.

The arrests were made as the result of an incident occurring Monday night. Howard Lackshire, of this city, who is employed by the Martin Orchard Co., in hauling men to and from work, notified the officials of the company Tuesday morning that his truck had been stolen. Officers later, however, found the truck a short distance from the Martin Orchards, and from evidence obtained it was believed that Lackshire had been intoxicated. When questioned he confessed to buying liquor at the Fortemps saloon and the Huck barn.

Is Under Way Here

Program Will Result in

A Sturgeon Bay unit of the Federal Housing program was formed at a meeting of members of the Chamber of Commerce, city officials, building supply dealers and contractors held at the city hall Monday evening.

The committee immediately started to carry out that portion of the program which will make possible a complete census of all house owners in the city.

Every home owner will be contacted and a blank will be filled out to determine whether or not he is interested in any improvement or in the erection of a new home. Whether or not he will be able to finance such work or if he will need some help, the nature of the improvement contemplated, etc., will be noted.

The program is designed to restore to useful enterprise those ordinarily employed in the building industry.