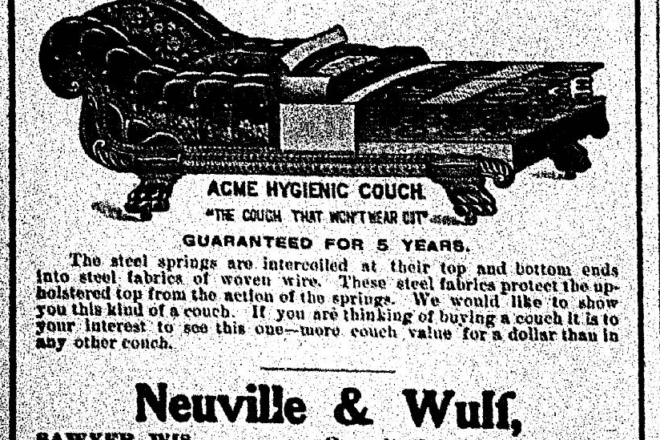 Mr. R. Noble is at work getting his steam ferry, landing docks, etc. ready for the opening day.

LITTLE STURGEON – John Stuempges has sold his interest in the blacksmith shop at the head of the bay to Albert B. Stevenson, who will open out the business in good shape as soon as he can secure the services of a good blacksmith. Mr. Stuempges leaves for Colby, in Clark county, this state, in a few days.

Joe Mardin Has Constructed A Machine For Cleaning Suckers.

Joe Mardin, of Sevastopol, has blossomed out as an inventor. As has been his custom for two or three years past Joe intends this spring to catch suckers, and before contracting for the disposal of his crop he desired to make sure that he could take care of all he might catch. It’s comparatively easy to catch suckers but there is lots of work connected with cleaning them so Joe went to work to construct a machine to do the latter operation.

The result of his ingenuity in this direction was displayed to a number of local capitalists at the city hall on Wednesday evening of this week, in the shape of a model of a machine which Joe claims will clean suckers as fast as they can be pitched into it. After the spring crop of suckers has been neatly and expeditiously disposed of the machine can be in a few minutes transformed into a first class feed cutter. With trifling changes the machine can also be utilized for chopping hash, splitting wood, peeling potatoes, spanking babies, and in fact for the performance of nearly all ordinary household duties….Local capitalists feel disposed to look favorably upon Mr. Mardin’s schemes and Jules Gray has already signified his willingness to take stock in it provided Joe will devise an attachment to the machine by means of which it can be used to wash pop bottles.

Door county was honored and its assemblyman, Frank N. Graass paid a glowing compliment by the members of the state legislature on Tuesday morning by being selected speaker pro tem of the house.

In view of the fact that this is the highest gift in the power of the legislators to confer on one or its members. It indicates that the assemblyman from this county is held in high esteem by his colleagues.

Mr. Graass is the youngest man that has ever had h honor of presiding over the assembly and he is receiving the congratulations of his friends in having been the choice of the members, which is composed of many lawyers, judges and learned men of the state.

It is the first time in the history of this county that its representative had the honor of presiding in the speaker’s chair.

John R. Seaquist of Sister Bay has been notified that he is the winner in the radio contest given by the Scientific American and the Zenith Radio Corporation at the time of the eclipse of the sun on January 24th.

The prize was given for the best report of reception of the broadcasting signals during the period of the eclipse. While he was only one of the many that sent in a report, he was highly gratified to learn that he submitted the best and had been awarded a 3R Zenith receiving set as a prize, this apparatus being valued at $160.

The results of this investigation will be published in the Scientific American of March 18th.

Mr. Schultz was the brother of Albert Schultz of this village, and the sister of Mrs. William Williams of Sturgeon Bay.

When last heard of, Mr. Schultz was managing a lumber camp near Middle Inlet, Michigan, and had been doing so for several years. About 48 years ago he left that part of the country and nothing more was heard of him until Tuesday of this week, when his brother here received a telegram from his employer, Mr. Goodman of the Fuller-Goodman Lumber company in Newberry, telling of his death.

Mr. Schultz was born on Nov. 1, 1864, at Pommerin, Germany, a son of Carl and Wilhelmina Schultz. He came to this country when he was two years old, settling near Milwaukee. Twelve years later his parents came to Door county, and settled on a farm four miles north of Baileys Harbor, on what is now known as the Herman Risteau farm.

Interment was made at the Baileys Harbor cemetery, and the pallbearers were: Harold Strege, Robert Williams, Edward Kost, Robert Schultz, Carl Schultz, Donald Schultz, all sons of nieces and nephews of Mr. Schultz.