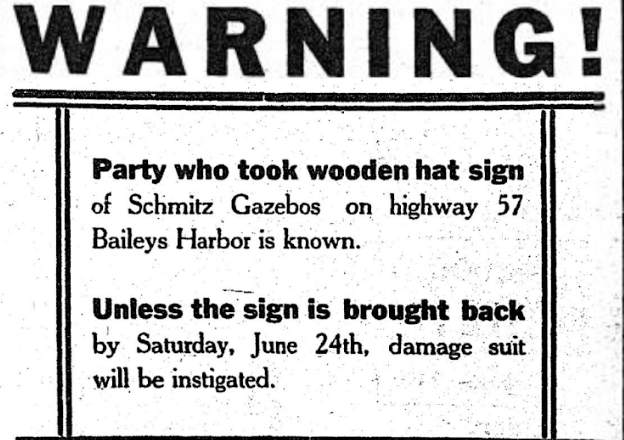 One Mr. King, of Bailey’s Harbor, made a raise of some money last Monday. He raised it out of the pockets of one of the boarders at Hunt’s hotel, and started for Sturgeon Bay. He was followed, caught and lodged in jail. One night in the lock up softened his heart so that he confessed the theft, and restored all the money he had not distributed, and also surrendered a suit of clothes he had bought with the money.

He had his preliminary hearing on Wednesday morning; was bound over to Circuit Court, and in default of bail was lodged in jail.

The game of base ball between the Badgers of this city and the Alleghanies of Sevastopol, last Sunday, closed at the first half of the eighth inning when the score stood fifty-seven to sixteen, the larger score standing to the credit of the Badgers. The Alleghanies realizing that a stern chase is always a long one, concluded that it was too warm a day to play ball and sought the sequestered retreats of their native heaths.

Ole A. Anderson, of Sevastopol, was arrested last Monday on a charge of criminal intimacy with his step-daughter, Lena Casperson. A preliminary hearing was granted the accused on the 15th inst. And the testimony offered was too revolting almost for transcribing in a police court record. Bonds for his appearance next Tuesday were fixed at $300, in default of which he was remaned to the county jail.

Work on the new county jail is progressing at a satisfactory rate and from present appearances it will be a very handsome structure. The walls are being laid with cement and the floor and the walls in the cell department are made of concrete entirely.

During the week an agreement was entered into between the five banks in the county to close their places of business Saturday afternoons during the summer months.

The new order of things will go into effect Saturday, July 5th, and remain in force until Saturday, Sept. 13. Patrons of these institutions will govern themselves accordingly.

At a hearing before Justice Martin Dehos, in this city, Friday morning, Mrs. Edwin Ostram, of Rowleys Bay, confessed to the murder of the illegitimate child of her only daughter, Miss Evangeline Ostram, which was born on Wednesday, June 18. The child is alleged to have been killed by means of carbolic acid and later struck on the head. It was found buried at the rear of the Ostram home by Coroner Christiansen.

Norman Ostram, 19, son of the alleged murderer, is under $500 bonds charged with burying the child without a burial permit.

In her final confession Mrs. Ostram stated that she had poisoned the baby before leaving for Green Bay where it was planned to leave it in an orphanage where it was refused entrance. The baby died, it is stated, while returning the next morning.

Rates were set for cherry pickers this season at noon Monday of this week when representatives of the principal cherry growers in the county met to establish uniform rates.

A reduction in market demand necessitates the reduction of half a cent a pail for cherry pickers.

Apparently the cherry picking season will start at the usual time this year, with the week of July 9 being the opening date for the season, and will be about a four weeks duration.