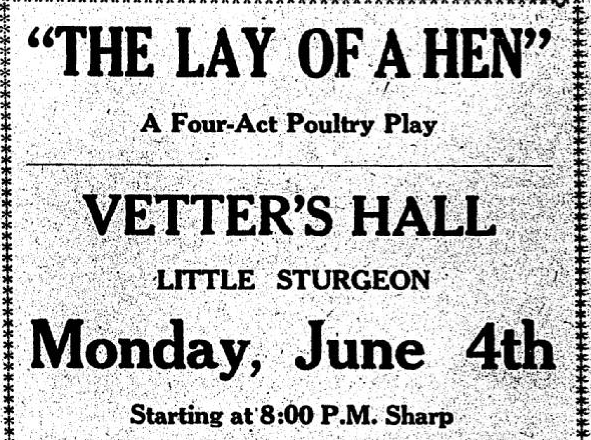 Our boys beat the Modocs at Ahnapee last Saturday in the match game at base-ball pretty badly. The Peninsulars scored 136 to the Modocs 31 – Hurrah for the Peninsulars! We’ve head of other tribes of Modocs getting worsted in fiercer and more determined engagements than that. They say they will not give up so; but will gather up their scattered forces, recruit their strength a little, and try to improve upon their skill and drop down upon the Peninsulars in about a month and go home singing. “We routed them we scouted them and put them all to flight.”

To-morrow, May 30, will be Decoration Day, and we hope to see a great deal of interest taken in the memorial services, for which extensive preparations are being made. All should feel it a duty not hard to perform, to devote this day in each year to the memory of the brave men who fought nobly and earnestly to preserve in peace and union our dearly-loved country. Patriotic feelings are not cherished as they should be by many, but are allowed to be almost extinguished by the pleasures, cares and trials of business life. Soletus all revive and renew such thoughts and sentiments by a proper observance of Decoration Day.

Chief of police Jacob Arnold has in his possession a Winchester repeating rifle, an outfit of cartridges, shells, reloading tools, and material for loading, a game bag, pair of rubber boots, and a satchel containing clothing. Theoutfit was found in the woods just north of the Leonhardt plat last Sunday afternoon. The articles were all covered with brush and leaves, apparently for the purpose of concealing them. The police think some youngster, going through the preparatory course for the reform school, stole the outfit and hid it there until such time as he might have opportunity to carry them away. The articles are at the enginehouse and the owner can have said by proving property.

PANKRATZ MILL ON ITS LAST RUN

Marks End of a former Great

Steam was raised at the Pankratz mill Monday after lying idle nearly two years and on Tuesday a small crew began cutting up the broomsticks. This will doubtless mark the end of the saw mill business in this city and what was the means of starting the town and maintaining it for many years is now a thing of the past. What will be done with the plant is not known although it has been reported that it will be torn down and moved to some other place.

The bulk of the lumbering industry was ended in this city and county some years ago but lods were brought here in rafts from northern Wisconsin and Michigan which prolonged the sawmill business in this city. Notwithstanding the loss of this important industry the city has grown and flourished and in its place has come an ever increasing and productive agricultural and horticultural community, together with the stone quarries, canning factories, etc., which will always make Sturgeon Bay an important city in this part of the state.

Reception and Welcome to Soldier

The reception that was intended to be given the returned soldier boys on May 31st has been postponed.

This was decided at a meeting of the council committee on Friday evening. It has been decided to hold the affair on July 4th in conjunction with the celebration that will be given under the auspices of the Door County Fair association.

It is desired that this be a day of patriotic jollification at the ending of the war and that we pay homage to the brave boys in khaki who made the peace possible. This is to be their day. The soldier boys rae to be the guest of the city on this occasion. They will be feted and treated to the best that we have.

It is expected that there is in the neighborhood of 800 soldiers and sailors in the county. A large percentage of these will attend the celebration given in the city.

In addition to the welcome to the soldiers it is intended to make this a home coming affair. Everybody in the county is requested to see that the absent ones get home on this occasion.

At 10:30 o’clock Saturday evening Gamewarden A. P. Vander Kelen and Deputy Warden Percy Weaver surprised a party of fishermen who are alleged to have set a net across Riebodldt’s Creek near Moonlight Bay. The four men placed under arrest by the wardens were Charles Hafert, Mooris Weis, August Dorn and Charles Johnson, all of Baileys Harbor. The men are alleged to have had a box partly filled with fish when the officers arrived.

When brought before Justice Martin Dehos, in this city, the first of the week they were found guilty and the four men together were fined $100 plus costs of 21.20, each being required to pay one-fourth of the amount.

The rapidity of air mail service was demonstrated in SturgeonBay last week, and gave citizens of Door county an opportunity to become acquainted with just what might be expected when and if regular service is established. A special delivery air mail letter leavingSturgeon Bay at 2 p.m. was delivered to the addressee in Chicago at 5 p.m. Quick service? Yes, but dependable and highly desirable. The people of Door county are interested in seeing regular air mail service established, as well as passenger and freight service, and it is hoped the county board will take hold of the proposition to provide a suitable airport.